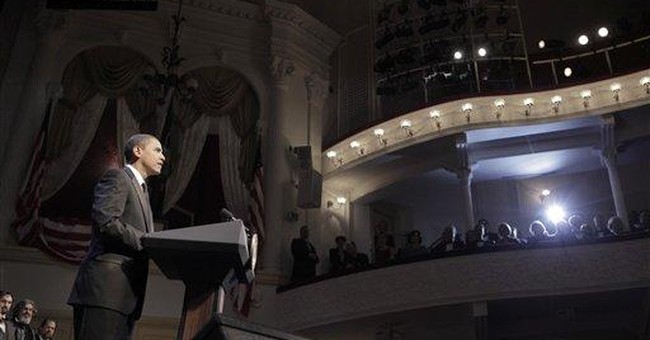 WASHINGTON -- There are two fundamentally entrenched sides in the debate over the best way to get the American economy growing again.

One is to spend nearly $1 trillion (including interest on the debt) through hundreds of federal, state and local government programs and hope the increased spending will create enough new jobs in the public and private sectors to breathe new life into the economy.

The other is to let people and businesses keep more of the money they earn through lower income tax rates to further strengthen incentives to work, spend, invest and enter risk-taking capital ventures that will produce new wealth and prosperity.

President Obama is promoting the former in the belief that nothing else can work, though he cannot point to a single instance where government spending lifted an economy out of a recession.

Republicans, supply-side tax cutters and free-enterprise economists support the latter approach, and can point to examples where it has worked every time it has been tried.

The American people, God bless them, believe the tax-cutting approach would be far more successful in turning the economy around than giving government bureaucrats hundreds of billions of dollars to spend on the agencies they work for and thus swell the size and cost of government and feather their own nest.

That's what the Pew Research Center for the People & the Press found out in a recent poll of more than 1,300 Americans.

"In principle, more Americans say that tax cuts for individuals and businesses -- rather than spending on programs and infrastructure projects -- will do more right now to stimulate the economy and create jobs," according to Pew.

"Nearly half (48 percent) say tax cuts will do more for the economy, while 39 percent views government spending as more effective," the polling organization said. Notably, Democrats are narrowly split on the issue, with 41 percent for tax cuts and 47 percent for spending.

As I have reported in previous columns, public support for the $800 billion stimulus-spending package has fallen. Despite the full-court press by the Obama administration, its powerful campaign apparatus and assorted special-interest groups, more Americans are now in the tax-cut camp even though the president maintains they do not work.

"But as we've learned very clearly and conclusively over the last eight years, tax cuts alone can't solve all of our economic problems -- especially tax cuts that are targeted to the wealthiest few Americans. We have tried that strategy time and time again, and it's only helped lead us to the crisis we face right now," he said.

President Obama is wrong. In fact, there have been three times that sweeping income tax cuts have been enacted in the past 50 years to revive the economy in the face of economic slowdowns or recessions, and they have worked every time.

"We have indeed cut taxes 'time and time again,' and economic history proves that it works," says Republican economic strategist Cesar Conda in an analysis for Politico.com.

There were the tax-rate cuts under President Kennedy in 1963 and President Reagan in 1981. In "both cases, the economy boomed, private-sector jobs were created, and the so-called 'wealthy' ended up paying a higher share of the total tax burden," Conda said.

And let's not forget the incredibly well-timed across-the-board tax cuts and the reduced rates on capital gains and dividends under President Bush in 2001. They helped the economy come out of the dot-com decline and weather the economic storm that followed the Sept. 11 terrorist attacks. They resulted in six years of modest yet uninterrupted economic growth and the creation of 8 million new private-sector jobs before the subprime-mortgage calamity triggered the current recession.

Obama's claim on nationwide television that tax cuts -- "especially tax cuts that are targeted to the wealthiest few Americans" -- led us into "the crisis we face right now" is preposterous on its face.

It is interesting that he has postponed raising taxes on the wealthy until the economy is out of its recession because his advisers told him that "this is no time to be raising taxes on anyone." Even the rich contribute to the economy's health and well-being.

No one is saying that tax cuts alone can put a massive $14 trillion economy back on its feet. There is a need to help the unemployed and reinforce the social safety net and strengthen other vital arteries in the nation's financial system. But we also need to unleash the market forces that have made America the most prosperous nation on Earth.

This is no time to be sucking another $1 trillion out of the economy and drying up precious investment capital that is needed for credit expansion and business rehabilitation and revival. This is also no time to be imposing wage and price controls that have never worked and that have always led to unintended consequences.

At times, it seems the administration is doing everything it can right now to prevent jobs from being created. Last week's order to rescind plans to open up oil fields in the Gulf of Mexico for further exploration and drilling killed a lot of good-paying jobs. Is this the change they're talking about?