The Taint of Scandal Envelops Democrats 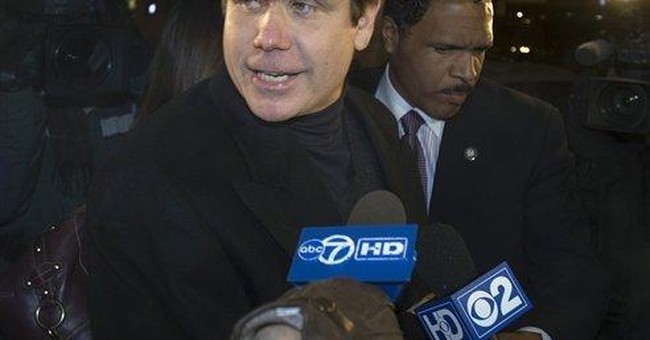 WASHINGTON -- Over the past four years, the Democrats blamed the Republicans for ushering in "a culture of corruption" that they charged had infected every nook and cranny of the government.

The lobbying payoffs and influence-peddling scandals did indeed bring down a number of Republicans, though it turned out that many Democratic lawmakers also had received tainted contributions from the same lobbyists or their clients. But that got less attention from the national news media.

Now the tide has turned against the Democrats on two fronts, and it is they who are being investigated on corruption charges just as they were poised to take over the White House and strengthen their legislative grip on Congress.

Rod Blagojevich's pay-to-play scandal, in which he has plotted to sell Barack Obama's Senate seat to the highest bidder, has pushed the Illinois governor to the brink of impeachment. But it has also embarrassed and distracted the president-elect and his transition advisers, and a top election analyst says the GOP could end up winning the vacated seat.

Obama is not implicated in the scandal, but many questions were raised about whether his designated chief of staff, Rep. Rahm Emanuel -- a hard-hitting practitioner of Chicago-style politics -- is the "president-elect adviser" mentioned in the U.S. Attorney's complaint that details Blagojevich's plans to put Obama's seat up for sale.

Meanwhile, Rep. Charles Rangel of New York, the powerful chairman of the tax-writing House Ways and Means Committee, is being investigated for, among other things, failure to pay his taxes and helping a rich donor to obtain a tax loophole in return for a large contribution to a public-service center named in Rangel's honor.

Last week, Republicans were attacking Democrats with a vengeance for being corrupt -- unleashing a barrage of press releases promoting a flood of newspaper stories about their latest troubles with headlines that read, "Democrats web of corruption continues to grow," "Rangel's troubles create a problem for the Democrats" and "Did Obama team have contact with Illinois governor?"

The smell of a scandal "might be building, though it's not there yet," said Jennifer Duffy, senior political analyst at the Cook Political Report. "But Democrats who have won on this message of culture of corruption now find the tables have turned on them, and they do have to be very careful that it doesn't get bigger," Duffy told me.

For Barack Obama, "it's a distraction he doesn't need right now," she said.

Scandal-wise, this has been a bumper year for the Democrats, who have seen some of their biggest names brought down by one investigation after another.

New York Gov. Eliot Spitzer was forced to resign his office after being caught in a high-priced prostitution ring. A little-known Republican defeated Democratic Rep. William Jefferson of Louisiana, awaiting trial for bribery charges and money laundering, in a runoff election last week. Florida Rep. Tim Mahoney, who replaced disgraced Republican Mark Foley, was defeated last month after keeping his mistress on the House payroll and trying to buy her silence.

More recently, a federal grand jury is investigating another "pay to play" case in which a California financial firm received a $1.4 million contract from the New Mexico government after contributing $100,000 to two of Gov. Bill Richardson's political action committees. Richardson is Obama's nominee to be Commerce secretary.

This week, Obama reported that an internal review of the Blagojevich scandal showed that no one on his transition had done anything wrong or had any improper contact with the governor about the Senate seat. But questions lingered about Emanuel and reports that he had presented a list of names to the governor for the seat.

But Obama supporters cautioned that, even if he did, there was nothing wrong with that if there were no payoffs.

There was "no harm in Obama's staff speaking with Blagojevich and expressing a preference for the appointment as long as they didn't offer anything in return," said Thomas Mann, a presidential scholar at the Brookings Institution.

Republican Party officials, however, were stepping up their attacks on the scandal -- perhaps a sign of things to come when the Obama regime takes over next month.

"The serious nature of the crimes listed by federal prosecutors raises questions about the interaction with Gov. Blagojevich, President-elect Obama and other high-ranking officials who will be working for the future president," said House Republican whip Eric Cantor of Virginia.

Still, while political analyst Duffy thinks the Blagojevich scandal "is pretty darn serious" for the Democrats, "I'm not sure this is serious for Obama; in fact, it's probably not serious at all."

More shoes will surely drop before this investigation is over. But the Republicans are going to keep pounding the Democrats on this one to make sure that they -- and the Senate nominee they pick -- will have little chance of retaining Obama's seat.

"The Republicans could have a chance to take this seat," Duffy said. "I think a special election would give them the chance to do that with a credible candidate."