It's the Economy-- Again 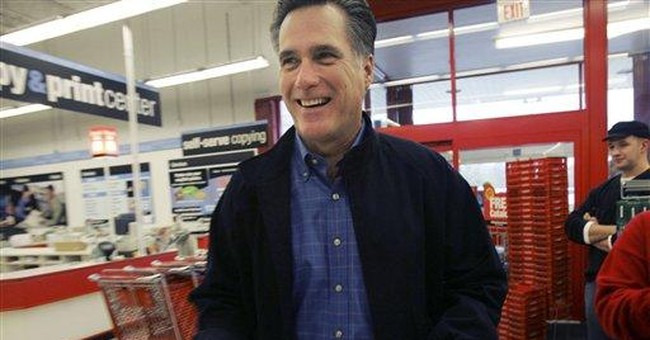 WASHINGTON -- There is no doubt now that the economy is, and will remain, the No. 1 issue in this year's presidential election -- and very likely influence who the nominees will be.

Barring a major setback in Iraq or the war on terrorism, the economic slowdown, and the guessing game about whether it falls into a recession, has set the stage for another long political battle over how to create new business investment, jobs and economic growth.

"Americans are most likely to mention aspects of the economy as the country's most important problem, followed by the war in Iraq," the Gallup Poll said last week. "Top-of-mind concern about the economy ... is now as high as it has been in about a year and a half."

The clearest sign of the economy's influence in the nominating contests came last week in Michigan, where the jobless rate soared to 7.4 percent, the highest in the nation.

Mitt Romney, whose early business career was spent plowing venture capital into promising companies that created jobs, won the GOP primary there convincingly with an optimistic message of investment and economic growth. He trounced John McCain, who said the state's lost jobs were "not coming back."

It was a must-win for Romney, who was born and raised there as the son of a popular governor, George Romney. But his victory also sent a timely reminder that both parties were in danger of forgetting last year: "It's the economy, stupid."

Whatever Romney's weaknesses may be on other issues, he certainly knows supply-side economics and how to unleash the power of the free market through tax-cut incentives to unlock the investment capital needed to innovate, create, compete and grow.

McCain's disturbing opposition to President Bush's tax cuts, a position he changed last year but one that suggested growth economics was not his strong suit, certainly helped Romney. Michigan has already been hurt badly by higher taxes, and Romney was running on cutting them.

But there was another image that helped him, too -- one of a take-charge, business-minded executive who has run a large investment company and who knows what works and exudes optimism about America's underestimated economic resilience.

Optimism seemed to be missing in much of the Democratic field. John Edwards was attacking "greedy" corporations, promising to bombard them with higher taxes and stiffer regulations if he becomes president. Hillary Clinton's campaign took a detour into racial politics, with several below-the-belt attacks on Barack Obama. If either one of them had an economic-growth message, it got lost in the crossfire of their civil-rights feud.

There was little difference in their economic agendas anyway, but on the message meter, Obama comes off as far more upbeat about the future, with a we-can-do-better challenge for the nation to set its sights on larger goals and ending the polarization that has paralyzed Washington in gridlock.

"I would say overall that few people are more bullish for the long term of the country and the economy than Obama," his adviser, University of Chicago economist Austan Goolsbee, told me last week.

When Obama talks euphemistically about "turning the page" and "not going back to refight past battles," he is talking about the bitter, polarizing, scandal-ridden era of the Clinton presidency. With his numbers rising and Clinton's eroding, his more optimistic view of the economy's future seems to be gaining ground among Democrats who want to move on.

In the meantime, the focus in Washington has turned to an economic-stimulus package that can put some liquidity into the hands of consumers to soften the downturn in the economy.

Bush's plan, still in its embryonic stage, will call for rebates of $300 to $500 to taxpayers, and temporary tax breaks for businesses to write off the cost of equipment and plant purchases more quickly.

This is not a plan for long-term growth, because every dollar the feds rebate "must first be taxed or borrowed out of the economy," said fiscal analyst Brian Riedl of the Heritage Foundation.

"No new spending is created. It is merely redistributed from one group of people to another," he said in a memo that is being widely studied on Capitol Hill.

What the economy needs is a new round of tax-cut incentives to unlock investment capital for business expansion that will encourage new wealth creation: Cutting the corporate tax rates, as New York Democrat Charlie Rangel proposed, cutting the capital-gains rate, as Romney suggested, and long-term tax cuts for small businesses that create most of the jobs in our economy.

But the president and congressional leaders on both sides of the aisle want to pass something sooner rather than delaying action while they fight over long-held differences on tax policy. Both sides support tax rebates and faster business depreciation schedules, so that is what is likely to be enacted within the next month.

Long-term economic-growth policy will have to be thrashed out once again in the presidential campaign.