The Prophet At Harvard 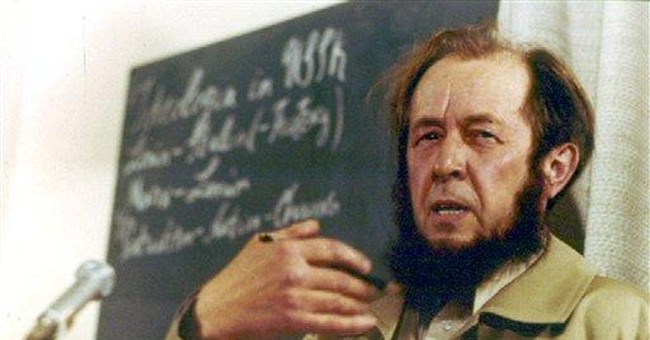 When we think of the collapse of the Soviet Union, several names come to mind: Gorbachev, Reagan, Pope John Paul II, Lech Walesa, Margaret Thatcher, Vaclav Havel. But one name is missing: Alexander Solzhenitsyn. It was Solzhenitsyn’s great corpus of work, beginning with One Day in the Life of Ivan Denisovich and continuing through The Gulag Archipelago, that opened the eyes of the West to the magnitude of the crimes of Soviet totalitarianism. Marxist-style regimes now survive only in isolated pockets: Cuba, North Korea, and in a qualified sense China.

Today it is impossible to deny that Solzhenitsyn was correct about the “evil empire,” and his role in exposing it and bringing it down. But there is another side to Solzhenitsyn that has been largely ignored, and this is his critique of certain trends in Western civilization. Solzhenitsyn raised this subject, no less controversial and for us closer to home, in his famous 1978 Harvard address.

Even though he was second to none in his denunciation of totalitarian socialism, Solzhenitsyn said, "Should someone ask me whether I would indicate the West such as it is today as a model to my country, frankly I would have to answer negatively." The whole address is worth reading, but here are some highlights.

On the lack of courage in facing a totalitarian enemy: "The Western world has lost its civil courage, both as a whole and separately, in each country...and of course in the United Nations....Such a decline is especially notable among ruling groups and the intellectual elite....They get tongue-tied and paralyzed when they deal with powerful governments and threatening forces, with aggressors and international terrorists."

On how materialism makes a nation soft: "Every citizen has been granted the desired freedom and material goods in such quantity and of such quality as to guarantee in theory the pursuit of happiness...So why and for what should one risk one's precious life in defense of common values and particularly in such nebulous cases when the security of one's nation must be defended in a distant country?"

On what has happened to the rule of law: "People in the West has acquired considerable skill in using, interpreting and manipulating law....If one is right from a legal point of view, nothing more is required, nobody might mention that one could still not be entirely right and urge a willingness to show restraint or sacrifice. Everybody operates at the extreme limits of those legal frames....A society without any objective legal scale is a terrible one indeed, but a society with no other scale but the legal one is not quite worthy of man either."

On the rights of criminals: "Legal frames especially in the United States are broad enough to encourage not only individual freedom but also certain individual crimes. The culprit can go unpunished or obtain undeserved leniency with the support of legions of public defenders. When a government starts an earnest fight against terrorism, public opinion immediately accuses it of violating the terrorists' civil rights. There are many such cases."

On the abuses of freedom: "Destructive and irresponsible freedom has been granted boundless space. Soceity appears to have litle defense against the abyss of human decadence, such as misuse of liberty for moral violence against young people, motion pictures full of pornography, crime and horror...Such a tilt of freedom in the direction of evil has come about gradually but it was evidently born out of a humanistic concept according to which there is no evil inherent to human nature."

On freedom of the press: "The press, too, enjoys the widest freedom. But what use does it make of this freedom? The press has become the greatest power within the Western countries, more powerful than the legislature, the executive and the judiciary. One would then like to ask: by what law has it been elected and to whom is it responsible? How many hasty, immature, superficial and misleading judgments are expressed every day, confusing readers, and without any verification? Thus we see terrorists made into heroes, or secret matters pertaining to the national defense publicly revealed, or shameful intrusion into the privacy of people under the false slogan: everyone has the right to know everything."

On the atrophy of the spiritual life: "Mere freedom does not in the least solve all the problems of human life and it even adds some new ones....We have placed too much hope in political and social reforms, only to find out that we were being deprived of our most precious possession: our spiritual life."

Thirty years ago, the very chattering classes mentioned in Solzhenitsyn's address ridiculed the man as a reactionary and a crank. The literary critic Susan Sontag wrote about Manhattan cocktail parties at which the cultural left would laugh at Solzhenitsyn. No one--certainly not liberals and libertarians--wanted to hear what the New York Times called Solzhenitsyn's "hectoring jeremiads."

But today when you go to Asia you hear everywhere the slogan, "Modernization, yes; Westernization, no." Throughout the Muslim world there is a reaction--exploited of course by the Islamic radicals--against what is perceived as the shamelessness and decadence of Western values and culture. Even in the West there is deep ambivalence about what has happened to cherished notions of liberty, the rule of law, freedom of the press, and the pursuit of happiness.

We don't have to agree with Solzhenitsyn on everything to say that, far from being a reactionary, here was a man who was ahead of his time in diagnosing some of the serious ailments of the modern era. Not only was he right about the Gulag; in many respects this forlorn Russian hermit was also right about us.