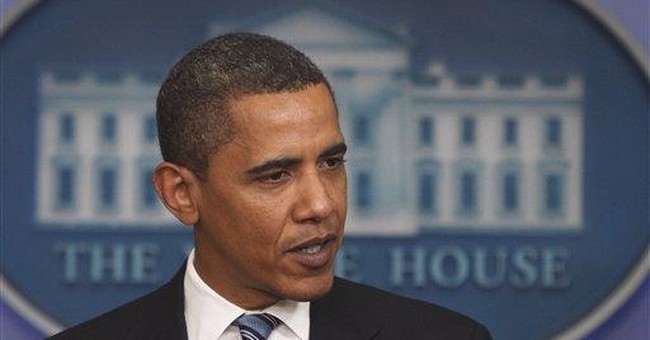 President Obama's rhetoric Wednesday night summoned the memory of "1984," George Orwell's novel of a nightmarish future -- where the slogan of the rulers is "War is peace; freedom is slavery; ignorance is strength."

He says that "health-care decisions will not be made by government" ... while he sets up a new Federal Health Board to tell doctors what treatments they can offer and to whom and under what circumstances.

Obama told the media, "I will free doctors to make good health care decisions" ... by telling the physicians what to do.

When the president says he guarantees the "same coverage" to people who like their current health-insurance policies, he means that their current HMOs, insurers and doctors will be the ones to implement the protocols and instructions the government hands down to them -- not that we'll have our current freedom of decision-making.

When he blandly assures us that we will "stop paying for things that don't make us healthier," he really means that his Federal Health Board will overrule your doctor and stop him from using his own best judgment in your treatment.

The president will "get the politics out of health care" by putting it under government control.

Obama says that he will not "add to the deficit" to fund health care. But the bill reported by Rep. Charlie Rangel's Ways and Means Committee leaves $550 billion unfunded.

The president says that he'll identify savings that will reduce the need for more taxes -- even though the Congressional Budget Office refuses to say that his "savings" will actually work and warns that the bill will really be added to the deficit.

He repeatedly tells us that he'll cut health-care spending. What he means is that he will cut doctors' incomes and will turn down patients -- particularly the elderly -- when they seek medical care that his bureaucrats disapprove of.

And he ignores that cutting incomes in the medical field will reduce the number of doctors and force further rationing of care.

The president opines that he will replace the most "expensive care" with the "best care" by empowering government officials who have never met you to substitute their judgment for that of your doctor, who has examined you thoroughly.

When Obama laments that "14,000 people lose their insurance every day," he is referring to the job losses that his own failed efforts to end the recession have permitted.

He warns that health care costs are gobbling up money that employers should use to raise wages and worker pay -- yet the plans he backs would require employers to pay 8 percent of their payroll as a tax or provide insurance to their workers.

The Obama plan highlights greater preventive care -- but, at the same time, cuts medical incomes and so will cut the number of doctors who might provide it.

The stimulus package, in the Gospel According to Barack, was "designed" to work over the next two years. But at the time, he demanded immediate passage to "jump-start the economy" -- something that clearly did not happen.

Medicare and Medicaid are "driving the deficit" even as he increased the amount of red ink by at least $800 billion in six months with little, if any, increase in the cost of either program.

He says he "expects" banks to repay their TARP money. In fact, they're lining up around the block to do so -- but the Treasury will only permit a handful of them to do so.

In summary, Obama's health program will promote "lower cost and more choice" by increasing spending by $1 trillion, telling patients what care they're permitted to have, and limiting their access to quality care.

Orwell's heirs should sue for violation of copyright.