There Is Still Time, John McCain 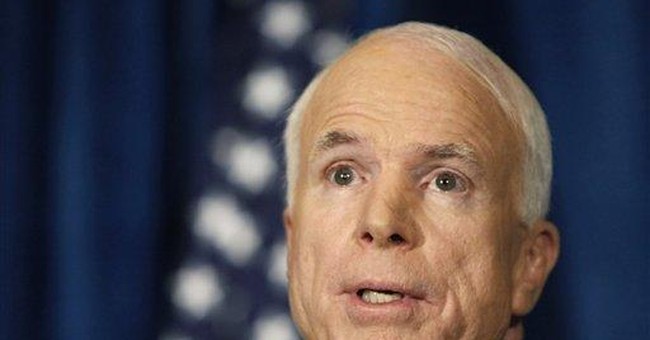 Trailing six points in Rasmussen's poll, having fallen four points since he suspended his campaign last week, the question for John McCain is: Haven't you learned anything?

His failure to do much of anything in Washington, after teasing the whole country and riveting their attention on him by suspending his campaign, has let the voters down -- and they are turning away from McCain.

But there is still time for him to make his move. The House Republicans bought McCain another shot by turning down the $750 billion bailout package on Monday. With no House vote scheduled until Thursday, McCain still has time to do the right thing.

He should publicly announce his support for the House Republican alternative package of insurance, loans and tax changes to deal with the financial crisis. He should attack Barack Obama and the Democrats for supporting the use of tax money for a massive bailout when the same purpose can be accomplished by other, cheaper means. McCain should draw a line in the sand and take a firm position.

The Democrats are not prepared to pass their bailout proposal by themselves. If they were, they would have done so on Monday. Instead, they withheld the votes of their most vulnerable congressmen and let the package fail. If the Republican Party poses a united front in the House, with McCain's leadership, the Democrats will have to fall in line. They cannot do nothing. By taking a firm line, McCain can turn the whole process around to his -- and his country's -- advantage.

Who would have imagined that John McCain would lose the election because he had a failure of courage at the last minute? Who would have guessed that he would choose not to stand on principle for fear of being criticized and fail as a result? If John McCain is to lose this election, let it at least be fighting for principle, as he has done throughout his storied career.

By backing an alternative, McCain forces Obama to defend the Democratic-Bush package. He can tie Obama to President Bush and to the Washington insider-Wall Street crowd. He can give his populism a programmatic reality and a topical relevance. Obama would have to spend the rest of the election defending the $750 billion turkey the length and breadth of the country.

America detests the bailout package. Polls show better than two-to-one opposition. Were McCain and the Republicans able to project that there is another alternative that works, the opposition would swell to even greater proportions.

Obama and the Democrats could cite the views of Treasury Secretary Paulson, Fed Chairman Bernake and Wall Street executives that the Republican relief package would be too little too late. But voters can be pardoned for skepticism. Paulson, a few years removed from Wall Street, and Democrats in hock to the street for campaign contributions are naturally eager to get their hands on $750 billion. If Obama lends himself to that cause, it could cost him the election.

McCain needs to have the courage to free himself from the web of Washington deals and take a principled stand for the right side and stay there. Then the inevitable dynamics of the process will bring the country around to him.

Otherwise, his campaign will have missed the opportunity to draw the kind of clear issue that would have gotten him elected president.

It is admirable to see a candidate of principle and conviction lose an election by standing on his beliefs. It is sickening to see one lose by abandoning them.