Afghanistan: Murder Capital for US Warriors 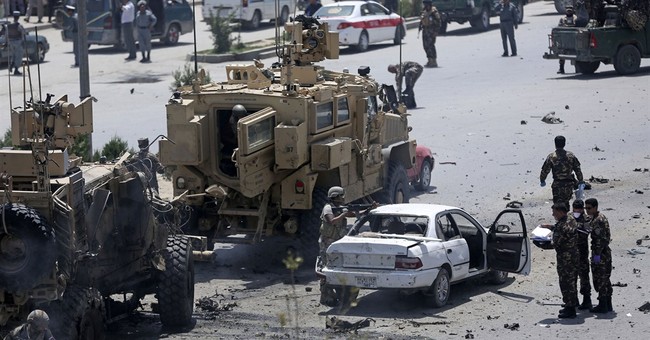 There is something deeply shameful about the official American response to this week’s unprecedented gunning down of a U.S. Army two-star general by an Afghan army soldier.

The president of the United States says nothing for two whole days. His spokesmen lie. The media disseminate the nothingness and lies, the mass of it couched to construct the alternate universe the deceivers in power have mastered.

This deception is all-encompassing, utilizing little lies as well as big ones. For example, the attack took place inside a Kabul military training academy we are told is “Afghanistan’s West Point.” If the Afghan National Military Academy equals West Point (already absurd), then it follows that the murder of U.S. Army Maj. Gen. Harold J. Greene – the most outrageous act of “inside-the-wire” terrorism directed against infidel “nation-builders” in the Islamic Republic of Afghanistan to date – equals “an isolated incident.” And vice versa.

Thus, we find ourselves in a place of numbness and corruption, where four bullets in the back of a U.S. Army general from the weapon of an ally/charity case is framed as an “isolated incident.” Indeed, this became the media’s phrase of concision to convey the diffuse but unmistakable Pentagon message.

“As terrible as today is – and it is a terrible day, a terrible tragedy,” Pentagon spokes-admiral John Kirby said of the attack that took the general’s life and wounded as many as 17 other military personnel (we still don’t know how seriously), “we haven’t seen in the course of the last year or so … a ‘spate’ of these insider threat attacks. I think that’s testament to the good work authorities have done.”

“Testament,” “good work,” “authorities” – happy talk from on high. Never mind the carnage on the ground after automatic fire erupted and the VIP delegation on site to discuss a $70 million renovation of the campus went down in a bloody heap (17 wounded!). The rest of the fake story practically writes itself. “Islam is peace” on the tips on their tongues, the media repeat: The motive for this isolated tragedy at Afghanistan’s West Point remains “unclear,” or “may never be known.”

That’s not the same as saying the motive isn’t knowable, or even that the Pentagon doesn’t know it. In 2011, a Pentagon “Red Team” led by Army behavioral scientist Maj. Jeffrey Bordin produced a report called “A Crisis in Trust and Cultural Incompatibility.” In an unusual act of honesty, this report eventually identifies culture clash as a driver behind the then-rising number of Afghan security force attacks on U.S. and other Western troops. Recommendation No. 40 out of 58 says: “Better educate U.S. soldiers in the central tenets of Islam as interpreted and practiced in Afghanistan. Ensure that this instruction is not a sanitized, politically correct training package, but rather includes an objective and comprehensive assessment of the totalitarian nature of the extreme theology practiced among Afghans.” (Notice that’s “Islam,” not “Islamism.”)

Uncle Sam’s response? Remove Bordin from the team and reclassify the report. Nonetheless, this report is widely available online, and Bordin received a Bronze Star in 2013, which indicates he landed on his feet. Meanwhile, the report’s key findings were ignored, as we can tell from a February 2012 pocket reference guide for troops called “Inside the Wire Threats – Afghanistan Green on Blue.”

To save U.S. lives, the Pentagon guide urges troops to walk on eggshells so as not to set off ISAF’s armed Afghans. For example: “Avoid public rebukes,” the guide says. “Counsel in private jointly with ANSF chain of command” (directions any drill sergeant would roar at).

This is more than appeasement, however. This Pentagon guide is directing U.S. troops to assume the age-old role of the dhimmis, those wretched, self-censoring non-Muslims repressed and stunted by Islamic law. It goes on: “Respect Islam, Quran or a mosque; Afghan women, elders and children. Avoid arrogance; i.e., belief that ISAF culture is superior to Afghan culture.”

Pure and simple, this is code for submission to Islam’s culture and tenets, which directly conflict with and contradict “ISAF culture” – i.e., Judeo-Christian-humanist principles. The peril to our liberty lies in the fact that “respecting Islam” and “avoiding arrogance” are impossible to do without surrendering these same Western principles.

Then again, Gen. Greene and the rest were just standing there, victims of a tragic, isolated incident that really could have happened to anybody anywhere, the Pentagon all but declared. An isolated incident.

The numbers show a different scenario. Yes, the number of Afghan attacks on Western (mainly U.S.) troops have decreased, but so, too, have the number of Western troops in Afghanistan who are the main targets. In the past 12 months, Afghan “allies” murdered eight U.S. troops out of about 30,000 remaining in the country. This works out to roughly 27 murders per 100,000 – a regional rate exceeded only by murderous Central America or southern Africa! (By comparison, Afghanistan’s annual murder rate per 100,000 is 6.5; the U.S. rate is 4.8.) When we refine the number of troop-targets to reflect the fact that at least two-thirds, or 20,000 troops, are support personnel and therefore not trainers or in regular contact with Afghans, the murder rate for U.S. troops at greatest risk skyrockets to 80 per 100,000.

For armed American warriors, then, Afghanistan, front-line and inside-the-wire, is a murder capital of the world. It’s way past time to leave it to the Afghans. Quite simple,there is nothing to win there.