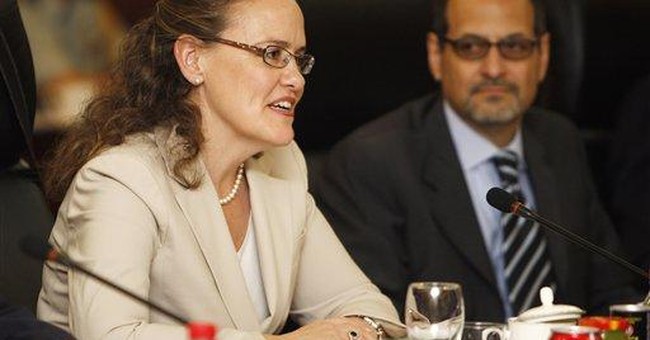 Early in 2012, I opened a column with this question: "Is there a single public official who is examining -- who cares about -- the murder spree by Afghan security forces against Western troops and security contractors in Afghanistan?"

Nearly one year has passed, during which 62 Americans and other Westerners have been killed by Afghan forces "inside the wire." The president has yet to call for "meaningful change"; in fact, he has said nothing about it. The Congress has said nothing about it. During the presidential campaign, Mitt Romney said nothing about it. Such silence is a national disgrace, but it's an answer to my question. No. They don't care. Not about the men. Not about their families. What they care about is the storyline -- the fraud that has kept the national arteries to Afghanistan open, fueling the American-led "counterinsurgency" fantasy that an ally, heart-and-mind, exists in the umma (Islamic world), if only Uncle Sam can mold it and bribe it and train it into viability.

But this trail of blood shed by our men -- fathers, husbands, brothers, friends -- leads in another direction. If We, the People, were to follow it, drop by drop, we would begin to understand there is no ally, no "partner" in Afghanistan, no matter how hard our leadership lies to us. We would see for ourselves that the difference between the "extremists" and the "moderates" in a sharia-supreme culture is ultimately inconsequential, and that the gulf between Islam and the West is too deep to plumb without losing ourselves in the process. If we were to keep following this trail of blood, we would even conclude that our leaders, from President Bush to President Obama, have been wrong, criminally, recklessly wrong, ever since 9/11/01, when they began doing everything possible to deny the centrality of jihad in Islam even while sending America and her allies to combat jihad in the Islamic world.

Silence, thus, becomes the way our leaders can keep both their delusional ideology intact and their places in power secure. Deflection, too. In March 2012, a month in which three Afghan attacks took the live of two British soldiers and three Americans, Chairman of the Joint Chiefs of Staff Gen. Martin E. Dempsey deemed such shootings as "additional risk" necessary for "national security." In April, he would order all branches of the military and the service academies to scrub any training materials deemed "disrespectful of Islam" -- another blow to the study of jihad. In August 2012, midway through a month in which 12 American and three Australian forces would be killed in seven "insider attacks," Afghanistan commander Gen. John Allen actually offered excuses for the murders -- the strain of Ramadan fasting, summer heat and fast operational tempo. The following month, after four Americans and two British troops were killed in two separate shootings, Obama campaign adviser and former senior Pentagon official Michele Flournoy minimized the attacks as a "very occasional" problem and a sign of "Taliban desperation."

"It's very tragic and it's very upsetting when these things happen," said Flournoy, who is currently touted as a possible nominee for secretary of defense. "But they are a tiny, tiny, tiny fraction of a percentage of the overall interactions that are happening." This argument echoed the NATO line as expressed by spokesman and German Brigadier Gen. Gunter Katz. "Yes, we had 27 very tragic incidents," Katz said in August, about a dozen very tragic incidents ago. "We take them very, very seriously. But we must not forget that on the other side we still got almost 500,000 soldiers and policemen who work together, as we speak right now actually, in order to crush the insurgency and fight for more stability and security here in this country."

A tiny, tiny, tiny fraction of a percentage? Let's think about that. Out of those 500,000 security forces in Afghanistan, about 100,000 are non-Afghans and thus potential "green on blue" murder victims. (About 68,000 forces are American). One military source estimates that of these same 100,000 forces, probably about 25,000 war-fighters and other personnel actually assume the roles of trainers and partners to Afghan security forces. Thus, a more realistic way to think about these often weekly shootings is to consider that 62 Westerners from a pool of 25,000 were killed by their Afghan partners and trainees in 2012.

It's also important to remember that these are not battlefield deaths. They are mess hall, gymnasium and barracks deaths -- murders inside the community. It is not an unreasonable stretch, then, to compare the 25,000 partners and trainers among the larger group of 500,000 forces to a population of 25,000 university students among a larger community of 500,000 people. Imagine how 62 murders in a school year, even spread across a large state-wide university system, would strike us -- not as a "tiny, tiny, tiny fraction of a percentage," and, given the official silence, not taken seriously at all.