Why Is the U.S. Apologizing for Scorched Qurans 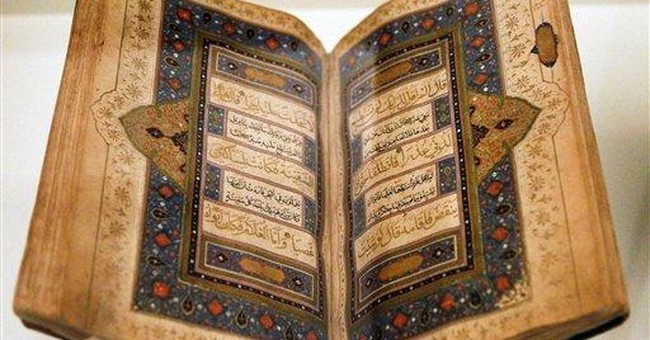 We've come a long way since the days of the Global War on Terror. Frankly, the GWOT -- whatever that was supposed to mean (how do you fight against a tactic?) -- is so 10 years ago. "Terror," meanwhile, has morphed into "extremism," but that's only made things more unclear. We still don't know what it's all supposed to be about.

Mr. and Mrs. America, boys and girls, welcome to the Global War on Quran-Burning, as led by the United States Masochists To Make the World Safe for Shariah (Islamic law).

If a column could have special effects, this is where piercing beams of sunlight would dispel clouds of confusion as pink bunnies jump up and down, squeaking, "That's it, that's it!" And a sigh of relief would spread across the happy valley ...

Or would it? If my title for the war our country has engaged us in is apt, have I described a cause most Americans support? I don't think so, but, of course, I don't claim to know the answer. That's partly because I see no upset in the land over the latest and greatest display of American dhimmitude -- the subservient state of Jews and Christians in thrall to Islamic law -- that we have witnessed in Afghanistan all week. Afghan Muslims have convulsed in rioting and killing (among other fatalities, two U.S. military personnel have been murdered by an Afghan army member) on word that Qurans and other religious materials were disposed of on a U.S. military base after authorities discovered the books were being used at Parwan prison in what the BBC said may have been "a secret Taliban message system."

You didn't hear about that last part? I'm not surprised. This crucial piece of the story -- the logical reason for the books' destruction -- is treated by the media, and also by the U.S. government, as secondary material. At least one unnamed "U.S. official" imparted this part of the story to the press (Reuters and AFP); unnamed "Afghan officials" have told the BBC the same thing. Judging by the gingerly way this news is being handled, it almost seems as if the perfectly logical rationale for the disposal of these materials is regarded as an embarrassment.

Not so the outrageous, primitive response of rioting Muslims. In our state of abject apology, we have, in effect, condoned this murderous behavior according to the Islamic rules governing treatment of the Quran. This isn't just political correctness run amok; it's open submission to Islamic law. After all, the Quran is an inanimate object, a thing, cheaply printed and distributed by the gazillion, often by Saudi Arabia. We -- if by "we" I may still refer to the Judeo-Christian-humanist world -- do not rampage and shoot people when an inanimate object, a thing, even a Bible, is torn, written on or thrown away. In fact, we have constitutional rights to do all of those things as a matter of free speech.

Nonetheless, we as a nation -- spilling blood for the "noble people of Afghanistan," as top commander Marine Gen. John R. Allen says in his prostration video (see it here) -- have deemed it vital to accommodate, apologize, slurp and scrape to those who do. Equally as tragic, in the frenzy to apologize, the logic behind throwing the stuff away has been sacrificed. Reason itself has been discarded in a shameful and irrational act of fealty. This isn't just dysfunctional behavior. This is full-blown dhimmitude.

Sorry to disappoint the pink bunnies.