When Did Opposition Become 'Racism'? 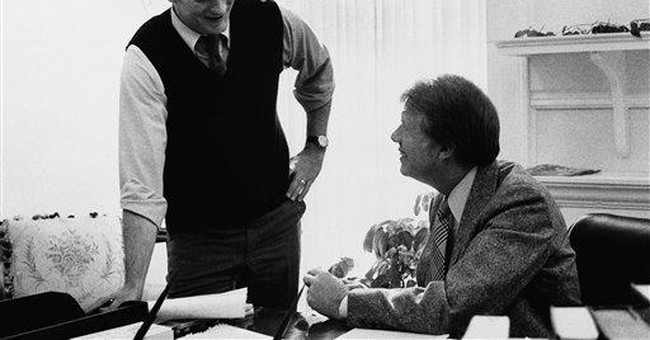 South Carolina Republican Rep. Joe Wilson may have unexpectedly ignited an explosion of race rhetoric with two words in the House chamber -- "You lie" -- but I can snuff it out with two words in a newspaper -- "Jimmy Carter."

The former president threw rhetorical kerosene on the political flames this week when he twice advanced the lowdown argument that political opposition to Barack Obama -- in town halls, faltering presidential poll numbers, the colossal anti-Obama demonstration in Washington -- boils down to "racism."

The allegation is contemptible but, particularly in the wake of the Wilson story, has been pushed by journalists on the Left and Democratic U.S. Representatives mainly from the Black Congressional Caucus. Evidence of racism is so thin, though, the racism-ists must invent lurid details. The New York Times' Maureen Dowd writes that when she heard Wilson say "You lie" she felt as if, "fair or not," she heard him say: You lie, boy! Georgia Democrat Rep. Hank Johnson draws a straight line from Wilson's remark to "folks putting on white hoods and white uniforms again and riding through the countryside intimidating people." Yeah. En route to Bellevue.

It would almost be funny if it weren't so grotesque. Of course, Jimmy Carter, who last appeared in this column after he laid red roses on the grave of Yasir Arafat before resuming his pursuit of face-time with Hamas terrorists, is no stranger to grotesque. Certainly after Osama bin Laden this week actually endorsed Carter's anti-Israel book, "Palestine: Peace not Apartheid," the former president needed a good, unctuous wallow in sanctimony to deflect our attention from his new fan. But Carter went too far -- even for him.

"I think an overwhelming portion of the intensely demonstrated animosity toward President Barack Obama is based on the fact that he is a black man," Carter told NBC. There exists the belief "among many white people, not just in the South, but around the country," he continued, "that African-Americans are not qualified to lead this great country. It's an abominable circumstance, and grieves me and concerns me very deeply."

What's "abominable" here is the spectacle of a former president attempting to asphyxiate democratic debate with the stranglehold charge of "racism."

It won't work. As promised above, I can stop it by mentioning the man's name. Fact is, the Americans who are now apoplectic about President Obama were once apoplectic about Jimmy Carter, and, later, Bill Clinton. (Some of us still are.) And please -- no American president, not even Richard Nixon, has ever been reviled to the gruesomely mock-violent degree that George W. Bush was. "Racism" had nothing to do with any of it.

In other words, it is not "racism" we are seeing breaking out around the country, it is political opposition. The Left is responding to vital signs on the Right, a stirring in the ashes of eight disorienting Bush years, that indicate there is a political fight to be had over the direction of this country.

And the best thing that Joe Wilson did for that fight was to stop apologizing while he was ahead.

But it is for this reason -- his refusal to submit to House Democrat pressure to participate in a show-trial-style mea culpa circus after the president accepted his personal apology -- that the public pillorying continues.

And is it ever ugly. Under cover of "racism" charges, the assault on the last unprotected victim group in America is rejoined. That victim, of course, is the white male. Or, as his politically correct tormentors like to taunt him repeatedly, "middle-aged white guys." These are certainly one of Maureen Dowd's favorite targets -- "white Republican men afraid of extinction," she calls them with the sadistic complacency of one who plays to society's approved prejudices. "Just it gives off a strange vibe," says MSNBC's David Shuster about the "older white men, all Republicans, sitting there" in Congress.

Wonder what Shuster says about the "older white men" at the Continental Congress? Or what Dowd says about such "middle-aged white guys" as Leonardo da Vinci, Louis Pasteur, Robert Browning, Thomas Edison and Clark Gable? As the academic leftists have reeducated us to believe, she would call them all dead white males.

Of course, you know something's changed when the tocsin of demonization targets live ones.