New strategy in Afghanistan: Protect everyone but Americans 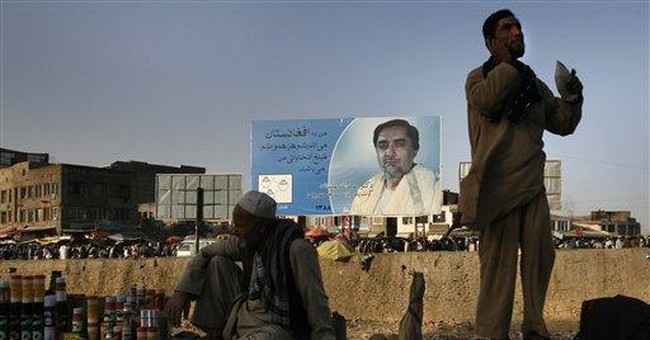 Well, it happened. Or, rather it happened and was reported, which is something else again. I will wager it has already happened, unnoticed, unrecorded, totally ignored.

But on this occasion, there was someone to witness it, write it down and publish it. I refer to death by rules of engagement. Specifically, the deaths of four U.S. Marines seemingly by the new rules of engagement (ROE) in Afghanistan. They took place on Tuesday in an ambush against Afghan forces and their U.S. trainers around the village of Ganjgal. There, journalist Jonathan S. Landay of McClatchey Newspapers lived through the deadly firefight to write the following:

"U.S. commanders, citing new rules to avoid civilian casualties, rejected repeated calls to unleash artillery rounds at attackers dug into the slopes and tree lines -- despite being told repeatedly that they weren't near the village." What Landay describes sounds like a disastrous manifestation of what Afghanistan commander Gen. Stanley A. McChrystal talked about all summer -- what I've called our war on civilian casualties. It is being waged, the hallucinatory thinking goes, to win Afghan "hearts and minds" and thus the "counterinsurgency" against the Taliban. McChrystal and this strategy currently enjoy the support of both the Obama Left and the surger-cons on the Right, who, under the auspices of a new conservative think tank, the Foreign Policy Initiative, recently wrote an open letter to President Obama specifically applauding the president for choosing the McChrystal team, and expressing confidence in its new strategy.

This infidel pursuit of Islamic "hearts and minds" is a wild yak chase that begins with ever-stricter rules of engagement (ROE). According to this extremely fuzzy thinking (don't be fooled by the buzz cuts), protecting the Afghan people from "everything that can hurt them" (McChrystal's words) not only will make the people like us, they will, in effect, then do our infidel bidding -- i.e., sprout distinctly non-Islamic attitudes about everything from liberty to thwarting jihad, to good government (or just government). But this is cracked. Worse, it excessively endangers our troops.

McChrystal explained how to the BBC: "It's a balance for the young soldier on the ground who is in combat. One of the assets that he has that might save his life might be air power or indirect fire from artillery or mortars and we don't want to take away that protection for him."

No, we don't, general. So why, I wondered last month, were we even talking about it?

The implication -- that our troops might be called on to think twice about saving their own lives -- was chilling.

It still is. And especially when what may have happened this week is less soldier-on-the-ground hesitation than commander-at-the-base implacability. Read Landay's account again:

"U.S. commanders, citing new rules to avoid civilian casualties, rejected repeated calls to unleash artillery rounds at attackers dug into the slopes and tree lines -- despite being told repeatedly that they weren't near the village." In other words, McChrystal's soldiers on the ground wanted protection to save their lives -- and didn't get it.

If true, this is a national disgrace. A NATO-led investigation is under way into the incident, which on its face appears to be a natural result of the "hearts and minds" policy endorsed by Left and Right alike. As McChrystal put it last month: "We're here to protect the Afghan people. And we're here to protect them from everything that can hurt them, both enemy activity but also inadvertent activity by Afghan forces or ours. So we're trying to build into the culture of our force tremendous sensitivity that everything they may do must be balanced against the possibility of hurting anyone."

Anyone except our own.

We've come a long way -- too long -- from George S. Patton's attributed words as spoken by George C. Scott in the movie "Patton": "I want you to remember that no bastard ever won a war by dying for his country. He won it by making the other poor, dumb bastard die for his country."

Today, our leading generals have something else in mind -- as when McChrystal says: "The Afghan people are the reason we're here."

Well, according to McClatchey's report this week, there is the haunting suspicion that the Afghan people, villagers and even security personnel, were behind the Ganjgal ambush in the first place.

So what kind of reason is that?