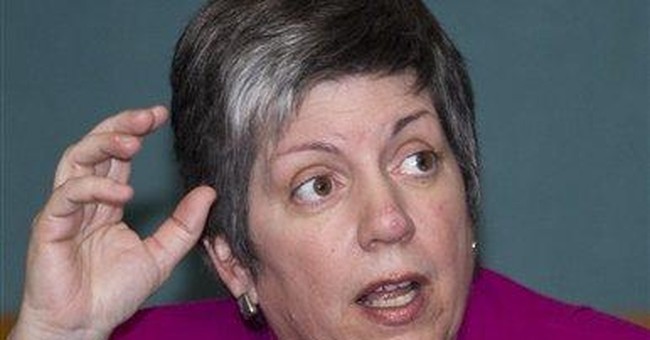 After reading and rereading the surreal Department of Homeland Security intel report on "right-wing extremism" that clearly designates conservative political dissent as part of the threat, I finally figured out why it all seems so familiar.

First, there's the report's leading villain, the "military veteran" returning from war in Iraq and Afghanistan -- the "potential lone wolf" terrorist with the lethal capabilities. That could raise goose bumps in anyone, right?

Then there are the "white supremacists" well known for their "longstanding exploitation of social issues such as abortion, interracial crime and same-sex marriage." (I don't get the connection either.) According to the government, we just might see a growing movement of similarly pro-life, pro-law-and-order, pro-marriage ... "white supremacists." Enough to make anyone hyperventilate, of course.

And what about the "right-wing extremist" who "adopts the immigration issue as a call to action"? Or the "many right-wing extremists" who "are antagonistic toward the new presidential administration and its perceived" -- perceived? -- "stance on a range of issues" including immigration, expanding government programs and gun control? According to the report, such "right-wing extremists are increasingly galvanized by these concerns and leverage them as drivers for recruitment." Sounds like a GOP voter drive to me. Cue up "Psycho"-strains of shrieking violins.

The fact is, we've seen this cast of characters before -- many times before -- in all of the schlock Hollywood movies that year after year harvest a diseased crop of villains from the American heartland, endlessly returning them to the screen as the "crazed veteran," the "religious zealot" and the anti-immigration "Nazi." These are the stock villains -- all racist, naturally -- who are now similarly demonized in the government's report.

This fantastic worldview that sees the country imperiled by military heroes, traditional values and even border security meshes perfectly with the also-official flip side to such paranoid liberal fantasy: namely, the harmlessness of the Islamic brand of "extremism," which Homeland Security Secretary Janet Napolitano recently renamed, and with a straight face, "man-caused disasters." Hollywood, of course, doesn't touch such "extremism" either, sticking with right-wingers-gone-wild to the very last reel.

But Hollywood-fantasy-turned-Washington-reality isn't simply crummy entertainment. It presents a grave menace to political discourse in this country. "We want to move away from the politics of fear," Napolitano declared last month to explain her new secretary-caused euphemism for Islamic terrorism.

But not too far. That is, Napolitano, who supports the DHS report, is plenty content to deal in the politics of fear -- just not fear of Islam. Fear of conservatism, however, is OK by her.

How to make it stick? The DHS report repeatedly reaches back for inspiration to the 1995 Oklahoma City bombing of a federal building, citing "military veteran" and domestic terrorist Timothy McVeigh, one of 42 million veterans who, not incidentally, have not blown up a federal building, as American Legion chief David Rehbein noted in an outraged letter to Napolitano. But while the DHS report is thin on specifics and devoid of sources, it nonetheless quite helpfully exposes the federal government's outrageous strategy to portray conservatism as "right-wing extremism."

The report defines the term this way: "Right-wing extremism in the United States can be broadly divided into those groups, movements, and adherents that are primarily hate-oriented (based on hatred of particular religious, racial or ethnic groups), and those that are mainly antigovernment, rejecting federal authority in favor of state or local authority, or rejecting government authority entirely. It may include groups and individuals that are dedicated to a single issue, such as opposition to abortion or immigration."

Presto -- the federal government has just taken key conservative positions, from opposition to Islamic law to support for security along our Mexican border, and cast them as primitive, "primarily hate-oriented" pathologies that are therefore beyond civilized political discourse. So, too, is opposition to overweening federal powers and "single-issue" opposition to abortion. What we are seeing, in other words, is the most extraordinary governmental attempt in history to limit the spectrum of debate by demonizing a range of positions as "right-wing extremism." This attempt is surely not only unconstitutional but also un-American.

But not in the Obama era. This is a time when the following statement would surely set off a red alert with all federal, state, local and tribal law enforcement authorities who received Homeland's report:

"What we have to do is bring back the recognition that the people of this country can solve its problems. I still believe the answer to any problem lies with the people. I believe in state's rights and I believe in people doing as much as they can for themselves at the community level and at the private level. I believe we have distorted the balance of our government today by giving powers that were never intended to be given in the Constitution to that federal establishment."

In the language of Homeland Security, which "right-wing extremist" preparing for "right-wing radicalization and recruitment" said that?