President's Stimulus Plan is an Obamanation 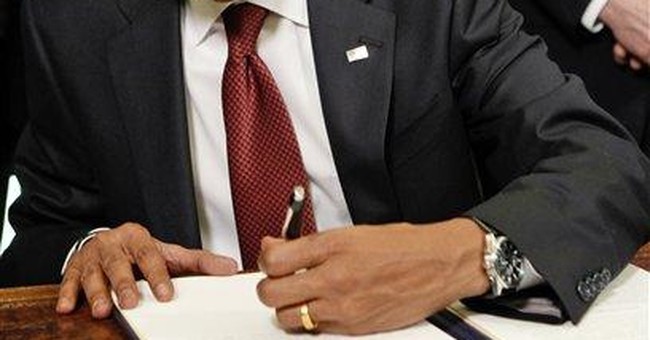 "That we are in the midst of a crisis is well understood," President Barack Obama told the nation on Inauguration Day. The president can say that again, and no doubt will. But the "crisis" itself is anything but well understood.

What we know for certain is that on or around Sept. 18 -- oddly enough, as AIM's Cliff Kincaid has pointed out, during the polling high point of John McCain's pathetic presidential campaign -- Bush administration Treasury Secretary Henry Paulson convinced former President Bush to abandon all remaining free-market principles and come up with hundreds of billions of bailout dollars from Congress. This not only saved Paulson's "buddies on Wall Street," as CNN's Lou Dobbs put it (not to mention Chinese interests, as Kincaid notes), but also endowed George W. Bush with the unexpected legacy of kick-starting the socialization of the U.S. economy.

We have been in "crisis" ever since, and, despite massive government interventions, markets remain what they call volatile. But mysteries abound. Maybe chief among them a set of September statements by Bush about the possibility that the point of crisis had been precipitated by what he called "illegal market manipulation." As Kincaid asks, "By whom or what? The President didn't say."

Nor has anyone else. This has left tantalizing questions hanging. Alas, curiosity seems to be a casualty of the crisis -- or at least of our media-churned crisis mode, a condition that more closely resembles panic.

Still, such a state gets results, which is surely what White House Chief of Staff Rahm Emanuel meant in November when he said, "You never want a serious crisis to go to waste." Such panic passed the Bush bailout bills in October, it boosted Obama's presidential campaign in November, and it now promises to drive forward Obama's colossal expansion of the Bush bailout strategy, lately euphemistically rebranded as the new president's "American Recovery and Reinvestment Plan."

A question for Obama, then, becomes, how does he maintain a national state of lightly constrained but motivating hysteria? Talking about it helps, as he did on Inauguration Day. The new president didn't simply note our understanding of being "in the midst of a crisis." No, he actually compared our current economic woes to the extremis and near-dissolution of the nascent nation in the its very first winter of war "when," as Barack Obama put it, "the snow was stained with blood." Your 401K plan has taken a hit? Welcome to Valley Forge.

Not surprisingly, The New York Times headline the following day was typical: "Obama Takes Oath and Nation in Crisis Embraces the Moment." But there was another attention-getting headline in that same Times edition, this one on the business page. No, not the story titled "Bank Crisis Deepens: No Quick Fix Likely from Obama Team," a headline that ingeniously gives both juice to the crisis and time to the Obama team. Rather, the column next to it was titled, "It's Bad, But 1982 Was Worse."

What's that? Times writer David Leonhardt, having solicited what he called a "broad measure of the job market ... stretching back to 1970" from economists at the Bureau of Labor Statistics, comes to a shocking conclusion. His research, he writes, "shows, for starters, that the economy is not yet as bad as it was in the early 1980s. It's not even that close to being as bad. The ranks of the unemployed and underemployed, controlling for the size of the population, were much larger in 1982 than today."

Other "indicators of crisis," as Obama called them in his inaugural, were worse back then as well. "Home sales," Leonhardt writes, at their worst in 1982, "were 30 percent lower than they are even now." Additionally, inflation was in double digits, as was the prime interest rate, which peaked at 21.5 percent.

I found myself wondering how Ronald Reagan, entering office in 1981 with high inflation (12 percent) and unemployment (7.5 percent) higher than today (7.2 percent), and a contracting GDP approached hard times. In what turned out to be his first inaugural address, he, too, used the word "crisis" to describe "the economic ills" Americans were suffering. Noting that these ills were a long time coming and wouldn't go away "in days, weeks or months," he said: "But they will go away. They will go away because we, as Americans, have the capacity now, as we have had in the past, to do whatever needs to be done to preserve this last and greatest bastion of freedom."

"In this present crisis," he continued, "government is not the solution to our problem."

There's a twist. In this present crisis, according to the Obama administration and its stimulus-package trillions, government isn't just the solution, it's our only hope.

That's change for you.