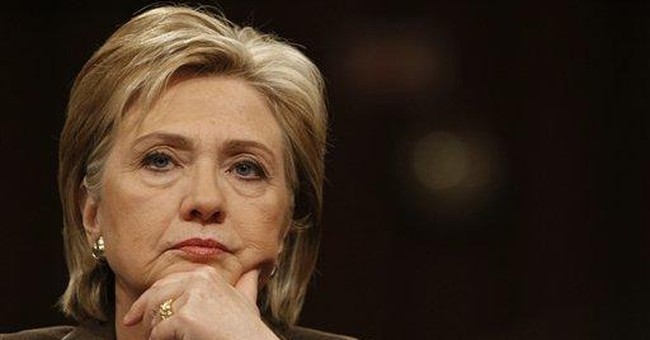 That was some confirmation hearing for madame secretary of State this week. One for the annals. Not so much for what Hillary Clinton said (boilerplate stuff) but for what the Senate Foreign Relations Committee did. The senators showed up to examine, at least, the many red flags popping up between Bill Clinton's ongoing global charitable foundation and Hillary Clinton's upcoming global diplomatic portfolio, but they stayed on to gawk and burble. On Thursday, the committee voted 16-to-1 to give the lady a big, fat stamp of approval.

But sometimes inexplicably: "The (William J.) Clinton Foundation exists as a temptation for any foreign entity or government that believes it could curry favor through a donation," cautioned Sen. Richard Lugar of Indiana. "It also sets up potential perception problems with any action taken by the secretary of state in relation to foreign givers or their countries...." Therefore, he concluded, in a sharp reversal of his own logic, "I believe that every member of this committee will seek ways to support Senator Clinton's work as secretary of state." Huh?

And sometimes with hearts and flowers: "I truly appreciate all that you are poised to do and what you have done in the past," Sen. Lisa Murkowski of Alaska told Mrs. Clinton.

Or with an awkward turn of phrase: "Despite the news accounts that say that I'm the one that's going to ask you the hard questions about potential conflicts of interest, I have no questions about your integrity," said Sen. Jim DeMint of South Carolina. And none about the Clinton foundation. Weirdly, DeMint then appealed to Mrs. Clinton "to do whatever is necessary to silence any critics before you take office."

Whatever is necessary? That'll give a turn to old Clinton hands who still can't shake the image of Webb Hubbell rolling "over one more time," or of Kathleen Willey's poor cat. "Enough said," said DeMint. Maybe too much.

"I'm just a junior senator from Tennessee, but it seems to me that everything has a season and this is your season," Sen. Bob Corker of Tennessee told Mrs. C., splashing the Senate hearing room with chicken soup for the soul. "It just seems to me there's no reason whatsoever to have continual press comments and other kinds of things that might take away from, I think, what might be extraordinary efforts on your part."

Such was the loyal Republican "opposition."

"I believe that the better your diplomacy, the better your ability to defend yourself," Sen. Johnny Isakson of Georgia, another Republican, explained to Mrs. Clinton. "A strong military is a great foundation for good diplomacy. And then if you add the development, which I think is "soft power" or "smart power," you have a great trilogy. Do you agree with that?"

"Senator Isakson, I couldn't say it any better," said Mrs. Clinton. "I certainly do agree."

All of which goes to show this confirmation hearing wasn't exactly a trial by fire -- unless, of course, "fire" means the kind of "fire" Mrs. Clinton said targeted her 1996 airport arrival into Bosnia -- i.e., nonexistent fire.

But, as Corker put it, there's no reason for "continual press comments." Why bring up the millions of dollars bubbling out of the Middle East and into the Clinton foundation from Saudi Arabia, Qatar, Oman, Dubai and the United Arab Emirates? No Arab sheikh will give any of that moolah a thought when Secretary of State Clinton comes to call, right?

And just forget about the millions passing into the foundation coffers from, say, Lebanese-Canadian businessman Victor Dahdaleh, now facing a U.S. federal investigation into charges that he helped defraud a Bahrain-government controlled metals company -- Bahrain being home of the U.S. Navy's Fifth Fleet. And never mind the donations of Gilbert Chagoury, a Lebanese-Nigerian businessman closely tied to former Nigerian dictator Sani Abacha. Chagoury, as the Wall Street Journal reported, has donated millions to the Clinton foundation. He also donated to Bill Clinton's 1996 re-election campaign -- later helping to arrange a hefty speaking fee for the former president -- while members of his family donated thousands of dollars to Hillary Clinton's presidential campaign. Just because this Clintonian sugar daddy has large oil interests in Nigeria, not to mention close ties to Lebanonese religious factions, let there be no "continual press comments" about these and other conflicts of! interest. As DeMint put it, "Enough said."

But Senate gag aside, these colossal conflicts of interest Mrs. Clinton carries with her to the State Department won't go away.

The situation was "unprecedented," said Lugar at hearing's end, adding: "I am hopeful that, as we go through the history of this, that people will not say, well, Senator Lugar, Senator Kerry and others were pressing it. They saw the problems. And we'll get full credit, but that will not be helpful to our foreign policy, to you, to your husband, to the foundation."