A Respite from Reality 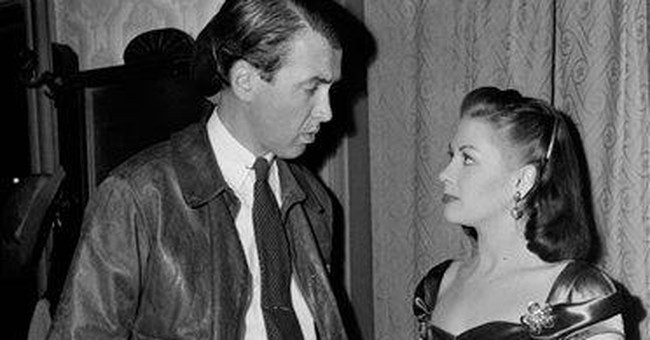 With alarm over the effortless and near-total socialization of the U.S. economy, and with worry over concessions in the Status of Forces Agreement with Iraq, a reader writes: "It is hard to feel joyful during the holiday season while our country and Constitution are in such peril."

Having sifted through the mailbag, I am sorry to say that such sentiments are not unique among readers lately -- at least those among the 45.6 million Americans who didn't vote for Barack Obama. I can't exactly say help is on the way, but how about the next best thing?

As one who continually presents reports and even eyewitness dispatches to readers of my column and blog (www.dianawest.net) about the ever-receding tide of Western civilization, I think I probably owe a little escape -- or, better, escapism -- to readers, some respite from reality. At least until the end of the holidays.

And so, after sorting through the vaults for some diverting holiday fare, here is a festival's worth of A-list movies set in some of the great cities and tourist spots of the world -- the same places that serve as backdrops to some of my rather more depressing columns about the ongoing multi-pronged war on the West that, alas, characterizes our era. But enough of that for now.

Given the gloom, some parameters. First, freshness. While these movies are what you could certainly call Cinema Antique, some of them may well prove to be new discoveries. In other words, no "It's a Wonderful Life" or "Casablanca" here -- although "Casablanca" wouldn't make this particular cut because of my second criterion: total uplift. There are no world wars brewing in these pictures, no bad cases of rotten luck. And no poignant states of marginal truth.

Let's kick off this cinematic tour in New York City with "Easy Living" (1937), an especially carefree A-list romantic comedy written by Preston Sturges about what happens when career girl Jean Arthur crosses paths with a Wall Street millionaire (who never heard of subprime "toxic paper") played by Edward Arnold. Ray Milland portrays the handsome son. And if you haven't seen "The Band Wagon" (1953), an all-time best musical with songs by Howard Dietz and Arthur Schwartz and starring Fred Astaire, Cyd Charisse, Jack Buchanan and Oscar Levant (who built a comedic career on his neurosis), it will lend a high note to any holiday.

We'll hop the pond with "Dodsworth" (1936), a grown-up drama of the first rank. Starring the nonpareil Walter Huston and Ruth Chatterton, this movie version of the Sinclair Lewis novel follows a retired American automobile magnate (who never needed a bailout) and his wife from the American Midwest to Europe (Paris, Vienna, Florence). There, they find themselves -- or, rather, different things about themselves -- beginning in London. London also serves as backdrop to a key section of "Random Harvest" (1942), a deeply satisfying, everything-works-out weepie, in which Ronald Colman plays a shellshocked veteran of the Great War who loses his memory of everything, including wife Greer Garson.

I wasn't sure I could come up with a movie set even partially set in Brussels, backdrop to many recent columns. But I did with "The Cat and the Fiddle" (1934), a charming adaptation of a frothy and tuneful Jerome Kern/Otto Harbach musical starring Jeanette McDonald and Ramon Novarro, which shifts between Brussels and Paris.

Paris, the inspiration of so many movies, is easy. My first choice is the unsurpassed romantic comedy "Midnight" (1939), starring Claudette Colbert as a broke American chorus girl who bluffs her way into French society. Don Ameche, John Barrymore and Mary Astor also star. Next is "Desire" (1936), a romantic comedy starring the exotic Marlene Dietrich as a continental jewel thief who crosses paths (in Paris, Biarritz and Spain) with straight arrow Gary Cooper, who, come to think of it, is another Yank from the automobile industry.

For Swiss Alps escapism, the movie is "Private Lives" (1931), a completely perfect, eternally crackling Noel Coward comedy that opens on the French Riviera. There, a divorced couple (Norma Shearer and Robert Montgomery) find themselves honeymooning with their new spouses in adjoining suites, ultimately running off together to a Swiss chalet.

Moving on to Prague, there is "The Shop Around the Corner" (1940), one of the most tenderly affecting romantic comedies ever made. Starring Jimmy Stewart and Margaret Sullivan, it was remade as "You've Got Mail" in 1998.

Last stop on the tour is Vienna, the setting for "The Great Waltz" (1938). This overlooked gem is based loosely and exuberantly on the life of Viennese waltz king Johann Strauss; it stars Fernand Gravet, Luise Rainer and the phenomenal coloratura soprano Miliza Korjus -- enchantment for music lovers.

So there you have it. Around the world in 1,075 minutes. And guaranteed to boost low spirits and blow out holiday blahs.