You Elected a Man, Not a Moral Judgment 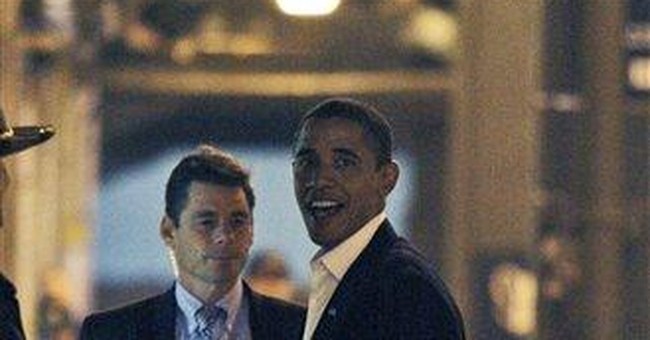 The New York Times' Thomas Friedman clued us in the morning after, waxing rhapsodic (or something): "And so it came to pass that on Nov. 4, 2008, shortly after 11 p.m. Eastern time, the American Civil War ended, as a black man -- Barack Hussein Obama -- won enough electoral votes to become president of the United States. A civil war that, in many ways, began at Bull Run, Va., on July 21, 1861, ended 147 years later via a ballot box in the very same state."

As befitting a Pulitzer-Prize winner, Friedman was only just warming up ("For nothing more symbolically illustrated the final chapter of America's Civil War than the fact that" blah blah...). But there were others taking up a similar battle cry. Madeleine M. Kunin, former governor of Vermont (and, as she also bills herself, eternal "first woman governor" of Vermont) declared at the online Huffington Post that the election of Barack Obama "is, in a sense, the culmination of Lincoln's quest -- a more perfect union."

And, well, so it came to pass that in those earliest hours of the new era that Spike Lee went on MSNBC to tell us will heretofore be known as AB (After Barack, natch, with all past millennia relegated to BB, Before Barack), the Civil War ended, and Lincoln's "more perfect union" was achieved. What next -- or, perhaps, why bother? That is, who could ask for anything more?

One answer is Menachem Rosensaft, who, elsewhere on Huffpo, pushed the election results into a somewhat different cosmic direction. "On Nov. 4, 2008, at 11 pm," he wrote, "Robert Kennedy finally won."

I rubbed my eyes but Rosensaft continued: "Forty years after his assassination shattered dreams and brought his quest to change America to a sudden, brutal halt, Robert Kennedy reached the goal that had been denied him in life."

Now I was starting to get it. Candidate Obama, whom the media permitted to remain a political cipher behind the flowing messiah robes, is now President-Elect Obama, magic mirror of historical redress.

In a particularly trenchant post-election column, author Shelby Steele explained how it was that a candidate he describes as "quite unremarkable" regarding public policy (an amalgam of "old-fashioned Keynesianism" and "recycled Great Society") was able, first, "to project an idealized vision of post-racial America," and then "have that vision define political decency." Once these visions were set, Steele writes, "a failure to support Obama politically became a failure of decency."

In this way, the white voters who became Obama's political base were vested in the success of Obama's vision -- or, rather, in the vision of Obama's success. Longing to "escape the stigma of racism," as Steele calls it, white voters became "enchanted" with Obama because their support for him provided evidence and certification of their own now self-evident state of "post-racial" enlightenment.

But, as Steele further explains, there's an inherent contradiction to this unusual, if not historically unique, relationship. "When whites -- especially today's younger generation -- proudly support Obama for his post-racialism, they unwittingly embrace race as their primary motivation. They think and act racially, not post-racially. The point is that a post-racial society ... seduces whites with a vision of the racial innocence precisely to coerce them into acting out of a racial motivation. A real post-racialist ... would not care about displaying or documenting his racial innocence. Such a person would evaluate Obama politically rather than culturally."

Bingo. Here Steel demystifies the great and perplexing divide between those who care supremely about documenting and displaying their own "racial innocence" -- and I would put the mainstream media, Obama voters and most politicians including John McCain into that category -- and those who don't. These latter "real post-racialists" see Obama as a man, not an icon, as a politician who emerged from a hotbed of anti-American radicalism, not a sacred totem of enlightenment better suited to a glass case at the Smithsonian than the boisterous tussle of the political arena.

For almost two years, Obama has been, in Steele's words, evaluated culturally. This has resulted in reverential media non-coverage and now post-election judgments and metaphors that are already beginning to defy satire. Of course, Barack Obama didn't end the Civil War, isn't the reincarnation of RFK, and benefits from, but didn't bring about, the long-entrenched social changes that facilitated his political rise. As he now heads to the White House, it's crucial that he finally be regarded as a politician, not a messiah, and as a man, not a moral judgment. Otherwise, the cultural juggernaut he seems likely to unleash will be unstoppable.