Devon Herrick
|
Posted: Jan 27, 2017 11:18 AM
Share   Tweet
The opinions expressed by columnists are their own and do not necessarily represent the views of Townhall.com. 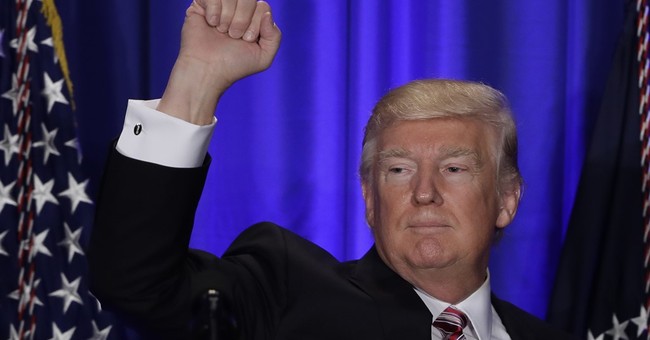 On the day of his inauguration, President Trump took time out to issue an executive order directing his administration to drag its feet enforcing provisions of the Patient Protection and Affordable Care Act (ACA). Regulators were instructed to “waive, defer, grant exemptions from, or delay…” whenever possible to the “maximum extent of the law.” Many believe this move was intended to destabilize the ACA and hasten its demise without Republicans getting blamed.

Republicans hold majorities in Congress and now occupy the White House. Thus, Republicans have it within their power to use a process known as budget reconciliation to repeal with a simple majority vote on those Obamacare provisions that involve the budget. For example, Republicans can repeal the taxes, fees and appropriations that fund the ACA. The individual and employer mandates, with associated penalties, can also be repealed.

What Republicans cannot do is repeal the costly insurance regulations that drive up premiums for most people. That would require the help of perhaps a dozen skeptical Democrats. The law is difficult to repeal because it was designed to alleviate a problem too costly for the government alone to fix. The health care law was passed to make medical care more accessible for low-income Americans and those with pre-existing conditions. This was to be done largely by socializing the costs and spreading the burden among a much broader segment of the healthy population.

Dismantling the ACA using budget reconciliation alone would get messy. Repealing both the sliding-scale exchange subsidies and the cost-sharing reductions for low-income enrollees would likely cause more than three-quarters of Obamacare enrollees to drop their plans. If Republicans scaled back the enhanced Medicaid matching rates to the level of non-expansion beneficiaries, many states would withdraw from Medicaid expansion. In the years following repeal (without replace) the individual market would implode under the weight of adverse selection. This is because the only people who would enroll in individual coverage would be those who are sick, since they are the only ones who could benefit despite paying sky high premiums.

The ACA was signed into law on March 23, 2010 after a year of heated debate. No Republicans voted for either of the two bills that became the ACA. The best known provisions include an individual mandate, an employer mandate, subsidies to help moderate-income people afford coverage and Medicaid eligibility expanded to include working-poor single adults. Young adults could also stay on their parents’ employer plans until age 26.

Several other prominent provisions include changes in insurance regulations for coverage purchased in the individual market. For instance, medical underwriting was replaced with the regulations known as guaranteed issue and community rating. This meant individuals could not be charged more or turned away due to pre-existing conditions; premiums could only vary by geographic location and age. In addition, maternity coverage was mandated in the individual market and women’s premiums could not differ from men’s. The ACA also did away with limited benefit plans and plans that do not include an essential benefit package. In the process the ACA banned annual and lifetime caps on benefits.

At first glance, many of these provisions do not seem unreasonable. However, they have a sinister purpose. They were designed to socialize medical care using backhanded regulations. Stated another way, Obamacare intentionally makes most people much worse off in order that it may benefit a few selected individuals. At its core the Affordable Care Act is an income redistribution scheme based on health status and wealth. The goal was to force non-poor healthy people to shoulder most of the cost of caring for the least healthy 20 percent of the population -- and those with modest incomes. Granted, actuaries will tell you all forms of insurance are designed to pool risk by redistributing premiums from those with no claims to those experiencing losses. The re-distributive intent of the ACA seems more deliberate, however. The ACA banned premiums based on health risk and instead requires community rated premiums grouped within a series of only three age bands. The ACA also banned annual and lifetime caps on benefits, and premiums that vary by sex. These provisions collectively have the effect of maximizing the transfer of wealth from younger, healthier enrollees to mostly older, sicker individuals.

Of course, nobody actually wins the health insurance lottery by having a heart attack. It’s good that most people do not require costly medical care that exceeds their annual premiums. Unfortunately, premiums are high because ACA proponents wanted society to be especially generous when doling out other peoples’ money. In a nutshell, the process of repealing & replacing Obamacare involves deciding how much of your money should go towards your own medical needs; and how much should subsidize others. This includes those whose health is more precarious than yours — including those whose health problems are unfortunate, as well as those with unhealthy lifestyles.