Devon Herrick
|
Posted: Sep 26, 2016 12:01 AM
Share   Tweet
The opinions expressed by columnists are their own and do not necessarily represent the views of Townhall.com. 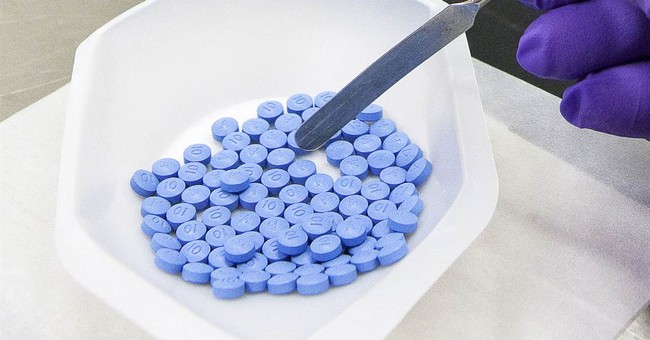 Drug prices have become a campaign issue accompanied by a plethora of bad ideas. Spending on prescription drugs has grown tremendously over the past few decades, mainly due to the increase in the number of diseases and conditions treated using drug therapy. The truth is: most drugs are dirt cheap! Only a small portion -- maybe 1 or 2 percent -- are rather costly.

Early in his campaign, Donald Trump came out with some bad ideas on how to lower drug prices, such as having the government negotiate drug prices for Medicare and importing drugs from abroad (that is: importing other countries’ price controls). He has since ceded these populist talking points to Hillary in favor of free-market ideas. He now advocates getting government out of the way, allowing competition to flourish. He understands that bureaucratic red tape at the U.S. Food and Drug Administration often prevents competition from holding drug prices in check.

Hillary Clinton is another story. Candidate Clinton is competing with the political ghost of Bernie Sanders to see who can devise a more ridiculous solution to lower drug costs.  Clinton has adopted the populist “cap the copay” policy idea that aims to limit drug cost-sharing to no more than $250 per month. This proposal is mostly a red herring. Manhattan Institute Fellow Yevgeniy Feyman estimates a $250 per month cap on out-of-pocket drug spending would benefit only about 1 percent of patients taking drugs. Moreover, nearly half of the benefits would accrue to wealthier households; those earning more than four times the federal poverty level, while the costs would come out of everybody’s pockets. Proposals to limit consumers’ copays basically forces health plans to pass on the higher costs to all policyholders as higher premiums. A handful of states have tried this. Besides raising premiums, it also encourages higher drug prices.

Drug cost-sharing is not really a problem for most people. Most Americans belong to a drug plan that provides drugs for nominal copays.  Nearly 90 percent of the drugs Americans take are cheap generic drugs, and about 80 percent of prescriptions have copays of $10 or less. On average, Americans only pay for about 16 percent of their drugs out-of-pocket. Someone else (insurers, drug plans and employers) pays the rest. Yet, activist politicians are trying to take advantage of the perception that drugs are unaffordable and in need of their policy solutions.

This is where Hillary really gets radical. She not only wants to tell health plans how much cost-sharing they are allowed to design into their plans, she also wants to tell drug makers how much they can charge.  For instance, she wants the government to directly intervene in the market to make drugs cheaper. In the 1990s Hillary helped push through a program to directly purchase nearly all childhood vaccines and resell them to doctors and clinics. If you remember back about 10 years ago, the supply of vaccines dried up as manufactures left the market. Few firms wanted to participate in a market where production costs were high and they stood to lose money on every sale. It didn’t help that vaccine manufacturers were being sued for every conceivable childhood malady parents claimed vaccines might have caused.

Clinton also wants the government to negotiate the price of drugs for Medicare beneficiaries. Most economists agree that government negotiation only lowers prices if the government has the authority to refuse to buy a product it deems too costly. Most seniors are not in favor of this type of rationing. The only other way government negotiation could actually lower Medicare drug prices is if “negotiation” is a code word for the ability to dictate prices (i.e. price controls).  That is what it sounds like on Hillary’s website. She proposes to “[h]old drug makers accountable for unjustified price increases with new penalties…” Apparently she wants a consumer protection agency for drugs that uses de facto price controls.

Hillary also wants to force drug makers to kick back bigger rebates to government payers and restrict the right of drug companies to advertise their products directly to consumers. When patents are about to expire, Hillary doesn’t want to allow drug makers to reach negotiated settlements. She prefers companies battle it out in court to determine when a generic drug is introduced. She also wants to “[e]nsure American consumers are getting value for their drugs,” and a bunch of other phony baloney rhetoric designed to sound good but do little to ensure Americans have continued access to advanced therapies.

Most drugs are a bargain -- often eliminating, lessening or delaying the need for surgery or hospital stays. To keep drug prices affordable, the FDA needs to clear the backlog of firms with pending applications to produce generic drugs. Congress also needs to boost competition by streamlining the approval process at the FDA. Campaign rhetoric about direct government intervention in the drug market is not going to help consumers.

Devon M. Herrick, PhD is a health economist and senior fellow with the National Center for Policy Analysis.