Devon Herrick
|
Posted: Jan 06, 2016 12:01 AM
Share   Tweet
The opinions expressed by columnists are their own and do not necessarily represent the views of Townhall.com. 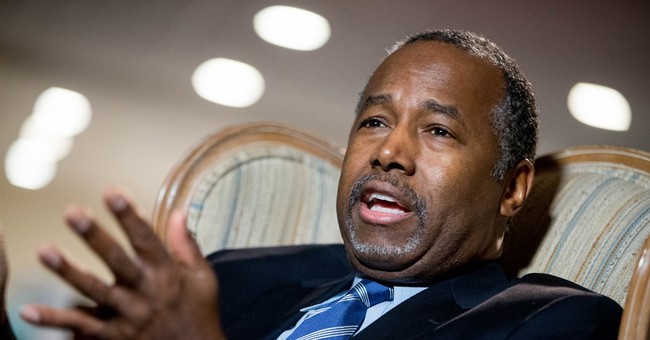 Presidential candidate Ben Carson unveiled his health care plan. Although the details are still sketchy, his proposal would rely heavily on “Health Empower Accounts” (HSAs by another name) that begin at birth. These accounts -- as is typical of actual Health Savings Accounts -- would be coupled with high-deductible health care plans.  Medicaid would be turned into a block grant, from which states would be expected to set up private accounts (HRAs, HSAs or FSAs) and couple with private health plans for low-income beneficiaries. Medicare would be converted into a tax credit, allowing seniors to buy private health plans. Presumably, seniors would continue to benefit from the use of their Health Empower Accounts throughout their Medicare eligibility. The age of Medicare eligibility would be gradually raised to 70.

Carson plans to fill in the details of his plan on the campaign trail. Maybe that’s better, since I can now make up my own details and decide how he should shape his plan. The idea that everyone should open an HSA at birth is a good one. Typically, medical expenses start out pretty low and increase with age. Medical costs don’t typically rise much until people are in their mid-50s. That allows plenty of time to accumulate a health care nest egg. A tax credit of $2,000 per year would amount to $100,000 plus compounded interest by age 50.

I don’t yet know how Carson would structure this, but there should probably be some requirement that parents buy some type of health plan to qualify for the tax credit.  I’m fine with either a high-deductible plan or a limited benefit plan. One question is whether or not parents would be allowed to use the credit to purchase health coverage. I tend to support making parents contribute something to get the tax credit. It should not be entirely up to the government to care for parents’ children.

Carson would do away with Obamacare. In that regard he has my support. As the lesser half of a couple who have maintained healthy lifestyles into middle-age, neither my wife nor I like the idea of spending $6,000 apiece on health coverage for plans with deductibles over $6,000. Think about this: the oddly-named “Affordable Care Act” expects us to spend $12,000 on coverage that does not pay benefits until we have spent an additional $12,750 in out-of-pocket medical spending. Our estimated medical bills next year will only be around $1,000 to $2,000. By about any measure, that’s the definition of unaffordable.

Medicaid block grants are something most conservative policy analysts and Republican politicians support. But presidential candidates (and free market analysts) should refrain from telling states how to use the funds. Some states may decide not to create personal accounts and divvy up funds for private coverage. A few states may prefer to fund public health clinics and chronic disease management programs, where the chronically ill poor receive care. That too should be states’ prerogative under a block grant.

Medicare is a touchy subject. Raising the age of eligibility to 70 is bound to raise the hackles of many early retirees and those nearing Medicare eligibility. Exchange plans for people in their sixties are expensive and the coverage is virtually worthless unless enrollees have high medical bills. Plus, there really is little money to be saved by raising the eligibility age from 65 to 70. Americans in their late 60s require little medical care compared to seniors in their 80s. Currently an American turning 65 can expect to live another 17 to 20 years, on average. That means about half of women will still be alive 20 years after they reach Medicare eligibility. If Ben Carson really wanted to reduce Medicare expenditures, he would recommend terminating coverage sooner rather than have coverage start five years later. If Medicare was limited to, say, 20 years ending at age 85, Medicare would save much more than delaying eligibility until age 70. (Note: This is not a proposal; it’s an example.)

Nonetheless, Carson’s suggestion that Medicare should be converted into private accounts with private plans is a good one. The NCPA recently published an actuarial analysis of a plan to move that direction. Workers (and their employers) would each contribute two percent of payroll into an account for each workers future Medicare needs. Upon reaching Medicare eligibility, the account would be converted into an annuity that pays an annual deposit to each senior’s HSA. Medicare benefits would include a $5,000 deductible plan, presumably a type of Medicare Advantage. More details would need to be worked out -- including how the plans would be risk rated.

One final problem: transitioning to a system of personal accounts, where people have set aside funds over years requires -- well, years! In the meantime, as deductibles reach the stratosphere, more people will become accustomed to asking their providers about costs. Once patients begin to realize comparison shopping actually works, then maybe a consumer society in health care will begin to take hold in health care.