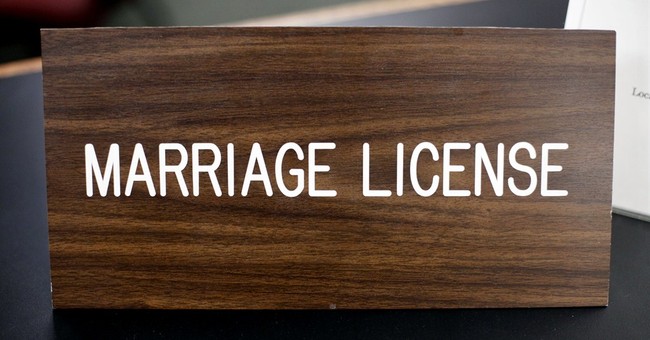 Marriage is on the decline, and some of that may be due to marriage penalties in the federal tax code and in government welfare programs. You can add another penalty to the list: the ObamaCare Exchange marriage penalty. Living together prior to marriage — or as a substitute for marriage — is about 15 times more common than it was 50 years ago. About half of all women of childbearing age have lived with a romantic partner prior to marriage. For the younger crowd — women in their 20s — this figure approaches three-quarters. A Pew Research Center poll found that nearly two-thirds of couples who live together view it as a step toward marriage. But, as the old saying goes, times are a changin’! First marriages are taking place later in life. And, increasingly, couples are opting out of marriage entirely.

Social conservatives may dismiss this as a case of waning morality — morally-challenged couples shacking up rather than enter into holy matrimony. Yet the reasons could be partially economic: there are financial penalties in the tax code that kick in when couples get married, and there are additional penalties about to take effect under ObamaCare that further discourage couples from “tying the knot.”

The reason for this is that health care subsidies to purchase coverage in the health insurance exchange are based on the federal poverty level (FPL), and the FPL does not rise proportionally with the number of individuals in the family.

For example, the poverty level is $11,490 for an individual, but it only increases to $15,510 for a married couple — just $4,020 more. Because this poverty designation does not increase equally for each member of the family, two unmarried individuals living together qualify for larger federal subsidies than they would if they were married.

Consider the case of two young lovers moving in together to share expenses, each earning 200 percent of the FPL (about $22,980 annually). This is how cohabitation often starts: it’s a financial marriage of convenience — minus the marriage. If that same couple were to decide to marry, their combined household income of $45,960 would rise as a percent of the poverty level from 200 percent (individually) to 296 percent for a family of two. Tying the knot boosts their family income on paper, but it has the opposite effect on their bank account. For example:

It gets worse. Living together also increases the likelihood of raising children without the security of marriage. Government surveys find that about one in five women who begin cohabitating for the first time become pregnant within a year. This figure doubles for some segments of the population. Few people would argue that children don’t benefit from the stability that marriage provides a family.

If the cohabitating couple mentioned above were to have a child together, the Tax Policy Center estimates they would suffer an additional marriage penalty of $2,672 per year in higher taxes as a result of their decision to get married (although their ObamaCare Exchange penalty would fall by $456). If the mother applies to food stamps, reporting only her own income and her and her child as her family size, she would likely qualify for an additional $1,800 in annual food stamp assistance. It is a reasonable bet that $5,437 (the combined marriage penalty worth about $453 per month) is a large enough financial incentive to make many couples like this hesitate about marriage.

The ObamaCare marriage penalty especially discourages low-to-moderate income cohabitating couples from marrying. National statistics already show cohabitating leads to marriage far less often among low-income couples than wealthier, more highly educated ones.Low-to-moderate-income couples who cohabitate are about twice as likely to forgo marriage as couples with a bachelor’s degree. This may be because the tax penalities take a bigger bite out of lower income couples’ budgets, discouraging a trip down the aisle.

It's not just young, moderate-income couples who experience ObamaCare marriage penalties; middle-aged, middle-income couples can as well. Exchange subsidies are a function of both income and premiums, which vary by age and region of the country. Thus, married couples whose combined income surpasses 400 percent of poverty will receive no subsidy, while their individual incomes would qualify for a generous subsidy. In some instances where middle-aged couples live in high-cost regions, their marriage penalty can surpass more than $7,000.

As a result of the ObamaCare marriage penalty, pre-existing marriage tax penalties and other marriage penalties embedded in government welfare programs, many moderate-income couples may decide a marriage license is an unnecessary luxury they cannot afford.