Deroy Murdock
|
Posted: May 21, 2018 9:48 AM
Share   Tweet
The opinions expressed by columnists are their own and do not necessarily represent the views of Townhall.com. 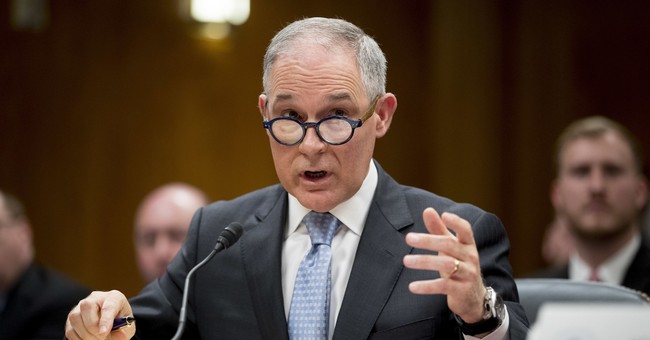 NEW YORK — EPA Administrator Scott Pruitt has been hounded lately by allegations of rich spending and poor judgment. While he could have detonated himself during recent congressional-oversight hearings, the former Oklahoma prosecutor seems to have survived those tests. Nonetheless, EPA’s inspector general, the Government Accountability Office, and various congressional panels continue to probe Pruitt’s official conduct. While Pruitt has plenty for which to answer, on at least three key counts, he seems to be cleaner than his critics claim.

Pruitt’s foes have attacked him for allocating too much on bodyguards. Senator Tom Udall (D - New Mexico) slammed Pruitt for “taking 30 EPA enforcement officers away from investigating polluters to serve as his round-the-clock personal security detail.” The Associate Press counts 20, not 30, in Pruitt’s full-time protective detail. Its cost, AP reports, “approached $3 million when pay is added in travel expenses.”

But an August 16 EPA report suggests that Pruitt’s personal-defense outlays are fueled by genuine safety concerns rather than self-aggrandizement. This document cites 14 threats against Pruitt and his family in Fiscal Year 2017. Among them:

• Pruitt’s daughter has been menaced via Facebook. e.g., “I hope your father dies soon, suffering as your mother watches in horror for hours on end.”

• One message to EPA said, “I hope your head administrator (Scott Pruitt), dies a very painful and horrible death through poisoning. Please explain the scientific method to this freaking neanderthal [sic].”

• Another spooky character stated via Twitter, “Pruitt, I am gonna find you and put a bullet between your eyes. Don’t even think I’m joking. I’m planning this.”

• A postcard sent to Pruitt read, “Get out while you still can, Scott, you are evil incarnate you ignorant fuck.”

• “Dear Mr. Pruitt,” another postcard began. “CLIMATE CHANGE IS REAL!! We are watching you. For the sake of our planet, our children & our grandchildren, will you be a reasonable man? I repeat, we are watching you! Myrna, Michele, Chris, Signe, Lucy, Olivia and Isabel.”

• A trespasser entered EPA headquarters on March 6, CBS News reported. He claimed to be a student attending a “Microsoft event,” said EPA Assistant Inspector General Patrick Sullivan. “The person asked about Scott Pruitt and wanted to know where Pruitt’s office was and if Pruitt ever walked in the hallway outside the room.” Although the intruder was escorted off the premises, he later phoned an employee’s office number and left voicemails in which he said, as Sullivan explained, “he can gain entry into EPA space anytime he wants.”

• Not content simply to write, one critic showed up in person. An EPA sentry stopped him. “During the confrontation, the subject was able to acquire the security officer’s duty weapon and discharge a round into a nearby chair.” The guard disarmed the visitor, who later was indicted for assaulting a federal officer/employee.

A similar attack that maimed or killed Pruitt — and perhaps EPA personnel and innocent bystanders — is hardly fanciful. Such a scenario is worth devoting resources to prevent.

Also under review: Pruitt’s 2017 housing arrangements in Washington, D.C. Pruitt’s accusers allude that he got a special, below-cost deal in some sort of bed-for-bribe swap. Had Pruitt been billeted for pennies in a Georgetown townhouse or an Embassy Row mansion, these worries would be legitimate. However, Pruitt rented a room in a Capitol Hill condominium and paid only for the evenings when he actually slept there. He shelled out $50 per night, or the equivalent of $1,500 per month. According to Pruitt’s lease, “Enjoyment is limited to one bedroom that cannot be locked. All other space is controlled by the landlord.”

In an April 4 EPA memorandum, Designated Agency Ethics Official Kevin S. Minoli stated that “within a six-block radius” of Pruitt’s crash pad, there were “seven (7) private bedrooms that could be rented for $55 or less/day.” Minoli, who also is EPA’s principal deputy general counsel, also found 38 such rooms “across a broader section of Capitol Hill.” As a result of its research, Minoli explained, “the ethics office estimated $50/day to be a reasonable market value of the use authorized by the terms of the lease. As such, the use of the property according to the terms of the lease would not constitute a gift under the Federal ethics regulations.”

No gift, no graft.

Some also have fretted about the fact that this property is owned by Steven Hart, an energy lobbyist, and his wife Vicki. Pruitt told the Washington Examiner that they were old friends from Oklahoma. “I’ve known him for years,” Pruitt said. “He’s the outside counsel for the National Rifle Association, has no clients that are before this agency, nor does his wife have any clients that have appeared before this agency.”

Pruitt reportedly requested and was given multiple extensions on his lease until last summer. Having overstayed his welcome, the Harts eventually asked Pruitt to make way for an incoming renter. The Harts changed the locks behind Pruitt. If this couple wanted to curry special favor with the EPA chief, this seems like a rather fruitless strategy.

It’s no surprise that these and other actions by Pruitt are under a microscope. For many on the Left, battling so-called “global warming” borders on religion. As they see it, the science is “settled,” this creed is beyond debate, and the heretics who question this faith should be jailed, as Bill Nye the Science Guy has suggested, or executed, as Professor Richard Parncutt of the University of Graz, Austria, has proposed.

Someone like Pruitt, who rejects global-warmist alarmism and is powerful enough to implement his ideas (e.g. persuading President Trump to junk Obama’s Clean Power Plan and withdraw America from the Paris Climate Treaty) embodies the Left’s worst nightmares. To the warmists, Pruitt is a torch-bearing arsonist, scurrying maliciously through their Vatican. And he must be stopped.

Even if Pruitt winds up scot-free, his situation should serve as a cautionary tale for every member of Team Trump — from the president on down: Their margin of error is thinner than Saran Wrap. President Trump and all who work for him should act as if their every action and utterance were being broadcast live on MSNBC, with Rachel Maddow, Chris Matthews, and Joe Scarborough offering scathing, bitter, and unforgiving commentary. No one on Team Trump ever will get the benefit of the doubt. When the First Lady gets slammed, even for unveiling an anti-cyberbullying initiative, it is safe to assume that everyone in this administration will be scrutinized with the deepest suspicions.

As much as these actions by Scott Pruitt can be defended, these days require an even higher level of purity. It may be as physically unobtainable as 250-proof alcohol. Regardless, and unfair as it may be, this must be the ideal to which every member of the Trump Administration, the Republican Congress, and pretty much each American conservative must aspire.