Democrats Fail To Get People To Care

Derek Hunter
|
Posted: Jun 23, 2022 12:01 AM
Share   Tweet
The opinions expressed by columnists are their own and do not necessarily represent the views of Townhall.com. 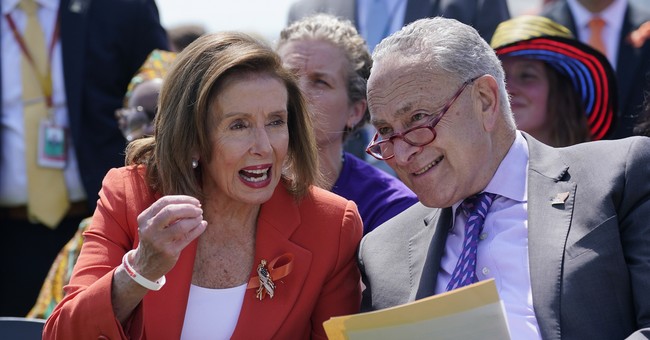 Be honest, did you watch any of that show trial hearing Democrats were attempting to force down the country’s throat? I doubt it, we all have better things to do. But if you did, I’d bet it was the first hearing – the one they tried to pretend was so “important” they held it in prime time – and if you watched any of that, it was likely not very much. The whole damn thing is a pathetic joke. And now the scheduled scam has reached its end. I don’t know how much it cost us, but whatever it is it was as wasted as Hunter Biden on prom night (not his prom night, the prom night for whatever 18-year-old he’s currently seeing).

Do you remember one thing about it? I do.

I remember that there was absolutely no one questioning the liberal narrative, zero pushback at all on anything. A row of bobbleheads nodding in agreement with whatever Nancy Pelosi determined would be the issues pressed.

“A threat to democracy,” they screamed without realizing the irony of their Stalin-esque show trial. Members of the committee fanned out across media in an attempt to sell this thing to the public and no one was buying. Even a cooked poll of only 545 people found people don’t care. If you liked Donald Trump before, you liked him after. If you didn’t, you still don’t. Pelosi could’ve paid me half what the sham costs and I would’ve told her the same thing.

You know you’re in trouble when you have Adam Schiff on CNN claiming to have clear evidence that Donald Trump committed a crime while refusing to say what that evidence is. Same goes for other members, whining publicly about how they have proof Republicans were seeking pardons (because they knew they’d participated in an attempted coup and were now looking to save their skins) but wouldn’t say who they are or what they did. It’s the classic “I have a girlfriend in Canada” defense.”

Was there a single memorable moment? Can you think of one?

I do remember few things from the only hearing I bothered to watch, the first one. I remember how horribly Chairman Bennie Thompson and Liz Cheney were at reading their scripts. Paris Hitlon’s acting is more believable.

I remember how they kept talking about how it was a “deadly riot” without mentioning the only people killed that day were protesters. And I’ll never forget how they all blamed suicides and a death by natural causes long after the events of that day on the riot. I can’t help but laugh when the people who created the phrase “mostly peaceful” talk about tangential deaths with zero connection as if they were a direct result of January 6th.

I, for one, will never believe 2 police officers committed suicide weeks later because they may have had a couple of bad hours on the job. That’s not the way suicide works. But Democrats seize opportunities. The same glee with which they dance on the graves of children after a horrific shooting clicked in them to use those deaths to their advantage. Why not, really? They aren’t around to refute the claims, so they are the perfect tools for the left.

When in doubt, make it up. Remember the Obama administration’s “Jobs saved or created” scam? Barry’s $1 trillion stimulus didn’t stimulate anything but the bank accounts of Democrat donors, so they had to come up with some new way to claim they didn’t waste everything. They pulled out a “jobs saved or created” stat. None jobs were created, and while there was no way to prove any jobs were “saved” by it, more importantly it was impossible to disprove any jobs were saved. The undisprovable scam has become a regular part of the left’s repertoire now.

This round of hearings are done, but the scam will continue. Democrats are desperate for something, anything else to talk about other than their horrible economy and inflation. “The other side is worse” is all they have and it’s not working. Expect them to double and triple down on it as the economic numbers get worse and worse. We’re one more quarter of negative growth away from a recession. If that happens, expect Democrats to start a January 6th cable network. Keith Olbermann is available to anchor.

Dems Once More in Disarray, as NYT Reports Biden 'Irked' By Party Members Questioning His Plans for 2024
Townhall
Cassidy Hutchinson deemed as ‘reliable’ over her memory about ... ketchup?
Twitchy
More Implosion of Hutchinson's J6 Claims as Adam Schiff Steps in It Big Time on CNN
Redstate
Another J6 Trump 'Bombshell' Outed as a Hoax!
PJ Media