To Hell With Professional Sports

Derek Hunter
|
Posted: Jul 28, 2020 12:01 AM
Share   Tweet
The opinions expressed by columnists are their own and do not necessarily represent the views of Townhall.com. 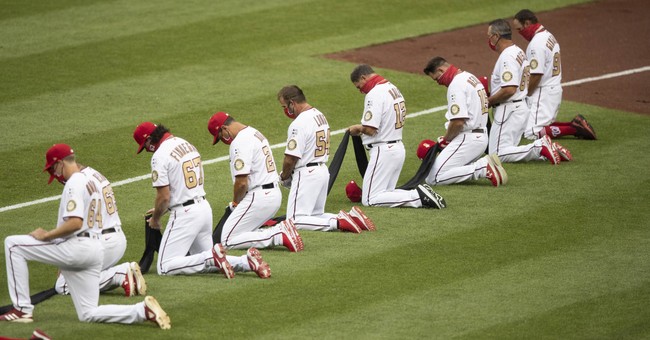 At the outset, I have to say that I’ve never been the biggest sports fan on the planet. So it isn’t a big sacrifice for me to say I’m not going to watch professional sports this year, or maybe ever again. I never actively shunned pro sports, and as a kid I wouldn’t have missed a Tigers or Lions game for just about anything in the world, I just found other things to do as I got older. But I’d wander back for interesting games or championships – there are few things a person isn’t directly involved with that are as exciting as a contest between great athletes when the stakes are high. But with the embrace of radicals like Black Lives Matter by all the leagues, I’m going to make a point of not watching any of it.

I won’t miss basketball at all. The game is boring. I know it’s “fast-paced,” but it’s really not. It takes forever and all that matters is the last two minutes. Each team seems to get 50 timeouts, which sometimes allows them to take the ball out at half-court rather than under the basket. I never cared enough to find out why.

It’s also just not exciting. The first time you saw a buzzer-beating shot to win a game may have been exciting, but haven’t you seen it a thousand times by now? And how many times can anyone get worked up over a 7-foot-tall guy with long arms jumping a foot to slam a ball through a hoop? It seems like everything spectacular that could be done already has been. It’s up and down the court like a really boring tennis match.

That the league has decided to overtake the NFL as the most-woke league in the world only made my resolve harder. That they’re going to paint “Black Lives Matter” and have messages on the backs of their jersey, and undoubtedly protest during the national anthem, killed what little interest I had in even knowing who won the championship.

As for the NFL, again, I don’t care. I didn’t grow up with a professional football team, I grew up with the Detroit Lions. Watching perpetual basement dwellers dwell in the basement is about as exciting as it sounds. The Lions have won one playoff game in the Super Bowl era (in 1991) and only make the playoffs via fluke.

Professional football for me is a distraction on the TV on Sundays – I don’t really look at the action unless it sounds like something exciting is happening. When the kneeling during the anthem started, I stopped even doing that. Now that they’ve gone all-in for Black Lives Matter, I’ll find something else to play in the background.

Baseball is back already (though games are being canceled due to COVID-19 outbreaks), and aside from videos on Twitter, I haven’t bothered to care. A 60-game season does mean anyone can win the World Series this year, but whoever does win will be there prostrating themselves on the altar of a bunch of left-wing radicals. I love baseball, but I love my country more.

It’s not that baseball players are kneeling during the anthem, it’s that the league has caved to the mob and brought politics onto the field. All these leagues have.

Sports served as a distraction from whatever else was happening in the world and our lives, now it’s the manifestation of the Democratic Party’s demands of conformity. I’m not interested in conformity. A bunch of different colored like-minded drones chanting anti-American slogans is not my idea of diversity.

If I want to be preached to, I’ll call a priest, not millionaires who play a game for a living. If I want to learn something, I’ll read a book, not seek out the “feelings” of someone in a profession known for having proxies take their classes for them. And if I want a distraction from the stress of daily life, I’ll practice self-dentistry before I give these pampered, privileged narcissists a second of my time.

Personally, if their whole seasons collapsed and had to be canceled because they snuck an infected super-spreader into their bubble, I’d be just fine with that.

Sports could have been bigger than ever, more important than ever, and could have helped bring the country together during the pandemic by being the distraction people need from everything we’ve lost. Instead, like everything else, liberal politics was rammed into it to the point that it’s just another appendage of the Democratic Party. You couldn’t pay me to be a Democrat, I sure as hell am not about to fund any of their fellow travelers. Until they get the politics out of sports, I’m getting the sports out of my life.