Derek Hunter
|
Posted: Jun 21, 2020 12:01 AM
Share   Tweet
The opinions expressed by columnists are their own and do not necessarily represent the views of Townhall.com. 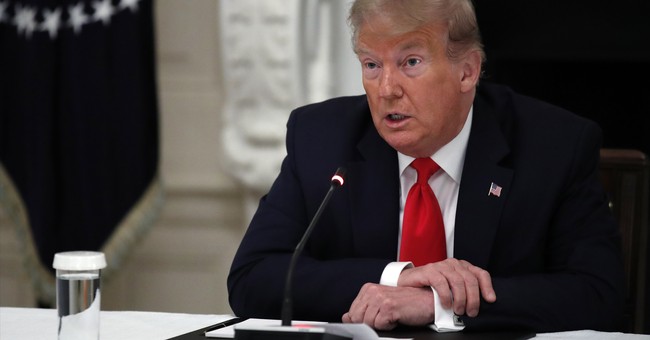 We all know someone who is a horrible parent. Whether they’re a friend or a friend of a friend, we’ve been to barbeques where someone sits silently while their kid throws an absolute fit over something, screaming uncontrollably, knocking things over, and being a general brat. When someone finally tells them to get their kid under control, embarrassing them by acknowledging the obvious, everyone else knowingly nods at that person with a “thank you” in their eyes. The nation could use that person right now. But in any position that matters, that person doesn’t seem to exist.

The thing a lot of people love most about President Trump is how he fights back, hard. Republicans had become known for taking a punch to the face, then apologizing for hurting the person’s hand with their head. Trump his back quickly and hard. That’s a refreshing change of pace, and an example some Republicans have taken to following.

Unfortunately, President Trump isn’t the most focused person when it comes public speaking, and this smackdown has to be public and sustained. It can’t be cluttered by other issues, which removes it from his wheelhouse. His rallies are fun, but the speeches tend to be all over the place. He can help, but he can’t do it alone.

No, this not only requires the president, but it also requires someone else, a lot of someone elses, actually.

For too long, the only content in the underpants of Republicans has been in the back, growing from last night’s dinner every time a leftist attacked them. To win this time, they’re going to need content upfront.

There is a huge swath of the country sick to death of the temper tantrum happening across the country – the ripping down of statues, the cancellation of movies and books, the beating the hell out of random people, and especially the guilt by way of existing. All configurations of Americans are watching what’s going on in their country and rightly it disgusts them. As much as everyone was sickened by the killing of George Floyd, what that righteousness was hijacked into being has nothing to do with it.

With tens of millions of dollars raised and companies and politicians bending their knees in solidarity and fear, a righteous cause has become an industry, a front for a movement seeking one simple thing: more.

Destruction, threats and violence have worked to this point, and it’s all Marxists know. And the leaders of these “protests” are Marxists. The rank-and-file participants likely believe what they’re being sold. It’s the leaders with a bigger, different agenda. It’s all the perfect storm – one doesn’t exist without the other.

But even the perfect storm has a weakness. In this case, it is that silent majority. They just need the inspiration, the comfort in knowing it’s okay to say enough. That’s where leadership comes in.

No tyrannical minority can withstand a majority unwilling to bow, unwilling to kowtow to their threats and demands. We’re dealing with militant leftist, not military here. They’re more comfortable sucker-punching elderly women and anonymously throwing Molotov cocktails from a crowd than being the focus of the crowd’s rage. Worse, they crave and need attention and fear.

If people stood up, if leaders led, if their lawlessness was not humored, if their lies were not unchallenged, if their names were publicized and their parents shamed, if their playlands were not indulged, they’d have no choice but to return to their basements.

These “leaders” thrive on indulgence and fear. Remove that and they’re angry middle-aged, unemployable virgins with more copies of the Communist Manifesto than friends. They have never gotten over whatever childhood trauma that drives someone in the greatest, freest country in the history of the planet to reject every opportunity presented to them by the luck of their birth. It's part of a quest to impose a system that has caused more human suffering than anything short of cancer. They need to be stood up to.

Politicians from both parties run for office saying they want to lead. Here’s their chance. By calling out this fraud, by standing up to the leaders of this mob, by standing up for America, any and every one of them has a chance to elevate and solidify their place in the minds of the public, to make a name for themselves and maybe even a future in higher office.