Derek Hunter
|
Posted: Apr 19, 2020 12:01 AM
Share   Tweet
The opinions expressed by columnists are their own and do not necessarily represent the views of Townhall.com. 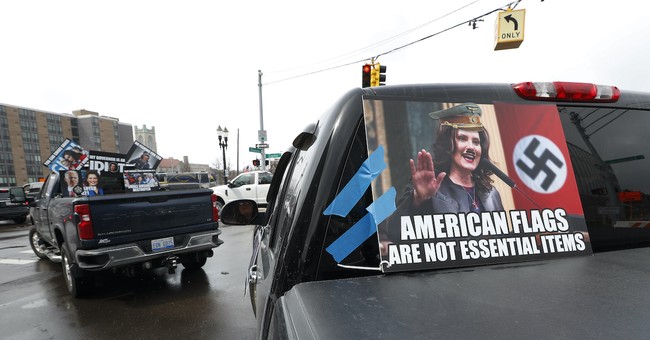 Yes, that title is a Democratic Party mantra, but that doesn’t mean there aren’t useful lessons in it for everyone. For the American people, it’s an important reminder that Democrats will seek to exploit something as horrible as the coronavirus pandemic to advance huge portions of their big-government agenda. For conservatives, it may be the best opportunity to roll back the size of government we’ve ever had because it’s been the best real-life example of the failures of massive concentrated power in history.

Anyone paying attention has noticed how Democrats across the country are using this emergency to expand their power. From the Governor of Michigan banning the sale of vegetable garden seeds and paint, to the speaker of the House holding up emergency funding to prevent the complete collapse of the nation’s economy for a week in order to secure taxpayer payoffs to liberal interest groups and pet projects, liberals everywhere have shown the world who they are. And that’s just the tip of the iceberg.

There is an active Democratic push in the House of Representatives to give US taxpayer money to illegal aliens while they are opposing the expansion of the Paycheck Protection Program, which is the only thing keeping tens of millions of Americans employed right now. You can tell a lot about people by looking at their priorities, and none of the Democrats’ priorities are the American people.

Nancy Pelosi, with her $20,000 fridge in her mansion’s kitchen, spends her time eating expensive ice cream and giving safe interviews with sycophants about how awful she thinks the president is at doing his job. While she hides 3,000 miles away, the president is doing his job; Nancy won’t even show up to work. (Why isn’t Congress in session right now? They’re being paid.)

Instead, she masterminds the ever-changing narrative for the media to attack the president – from “Trump is a racist for banning travel from China” to “Trump did nothing to stop the spread” – Pelosi is a cross between Tommy Flanagan and Joseph Goebbels, a comparison I don’t make lightly. Maybe she’s incapable of doing anything good; it’s difficult to know when there’s no record of her trying. Perhaps they could make one up and engrave it on a plaque in her honor to hang in the Kennedy Center, using a small part of the $25 million she found so important that she held up the relief bill for a week to get.

Meanwhile, in Michigan, Governor Gretchen Whitmer is earning her nickname “WHitler.” After declaring marijuana and lottery tickets “essential” (the government wets its beak thoroughly with those), she’s banned vegetable seeds and house paint – because people need to be stopped from taking care of home improvement projects they didn’t previously have the time for while the government mandates they remain in their homes. You can’t get “elective” surgeries like joint replacements, but she kept abortion clinics open because they’re “life sustaining.”

After Michiganders protested these restrictions, Adolf WHitler whined that demonstrators were going to force her to extend her ordered home imprisonment. Connecticut Senator Chris Murphy absolved the Chinese for the spread of the virus, blaming instead President Trump. Maxine Waters declared the president to be “slow walking America to dictatorship” because he was “trying to defund US Postal Service, & opposing vote by mail.”

There are useful idiots, and then there are just idiots. Sadly, so many of both are elected Democrats.

Times of crisis reveal who people really are, and Democrats are awful. But so is big government. If Republicans are smart, they’ll message the obstruction to fighting the coronavirus presented by the government. Of course, when it comes to the ability to message and coherently make a case, it’s always a big “IF” with Republicans.

Americans for Tax Reform has compiled a running list of federal, state, and local laws and regulations that had to be waived to speed up the coronavirus response. (As of this writing it’s up to 300!) Government had to waive everything from the ability of trucks in Texas that deliver alcohol to also deliver food, to the federal red tape preventing states from deploying coronavirus tests. It’s enough to make you wonder if these needed to be circumvented in an emergency, why were they ever there in the first place?

Pointing this out would reduce Democrats to arguing, “Big government failed us, we need bigger government!” If Republicans can’t beat that message, they deserve to lose.

Democrats view every crisis as an opportunity, even ones they’ve made worse. Republicans need to ensure everyone sees who they are and what they’re doing. The media won’t do it. Republicans have to start a campaign now. They need to nationalize this election, make it a referendum not only on where we go next, but where Democrats have taken us during this crisis. Otherwise, it will have all been a waste.