For Those We’ve Lost…

Derek Hunter
|
Posted: Jan 14, 2020 12:01 AM
Share   Tweet
The opinions expressed by columnists are their own and do not necessarily represent the views of Townhall.com. 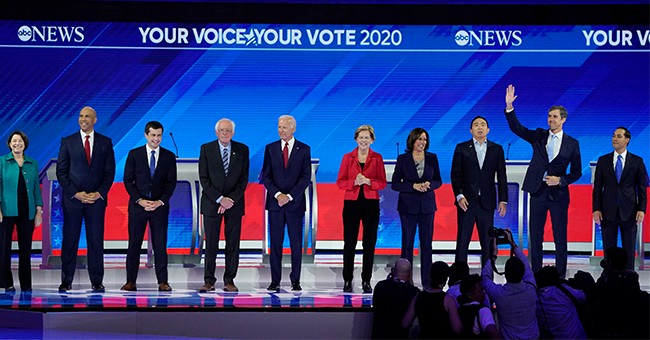 It’s been a time of significant loss…for Democrats, since 87.29 percent of their party announced last year they were running for president and it’s been nothing but loss for them since. As we start a new year, we should take a moment to look back and remember those we’ve lost (and mock them).

First, the most recent: Marianne Williamson lost her mojo and called it a day a week after letting her entire campaign staff go. The most shocking part of that development was that she had a campaign staff to begin with. Her campaign, and the fact that she ever made a debate stage, is a testament to the power of Oprah and crystals. Hippies didn’t die off, they went on to make a fortune serving as gurus to people with more money than sense. She will be missed.

Next comes Julian Castro. He and his twin brother Joaquin seem to have split the charm of one person between them in the womb, and neither has really racked up accomplishments. One of the finalists to be Hillary Clinton’s 2016 running mate, Castro was passed over because he wasn’t fluent in Spanish and “white guy” Tim Kaine was (identity politics is that stupid), he polished up his Spanish in the years following, only to discover it’s what you say, not how you say it. And no one cared what he said. He will be missed.

Who can forget Eric Swalwell? The gassy California congressman tested the theory that appearing on cable news shows is enough to garner a national following. Lost on him was the fact that he comes off like a vapid boob in those appearances, but nobody has ever accused him of being bright. He limped out of the gate, perhaps hindered by digestive issues, and never found his footing. It’s hard to run for anything while clenched. He will be missed.

Speaking of gasbags, New York City Mayor Bill de Blasio also ran for president. True story. The lazy, unpopular, and loud head of our largest city was convinced the country was yearning for his brand of decriminalizing public urination and alienating police officers. The people of New York were pulling for de Blasio, though only to get rid of him. He was never able to get outside the margin of error in polls and called it a day. He will be missed.

The candidacy of Kirsten Gillibrand was a result of the kind of distorted self-image reflected in a circus mirror that makes short people look tall. She was the parsley of candidates – no one asked for it, no one knows what the point of it is, yet there she was. And like parsley, voters ignored her and she was tossed out. She will be missed.

Kamala Harris was supposed to be a contender. She had everything going for her and was showered with glowing press. Then she started talking. And people listened. The more they heard, the less they liked. She never learned how to sell her law enforcement background to a party that opposes both police officers and enforcing the law. Seems like something she should have strategized before choosing to run. She will be missed.

Beto, sweet, sweet, Beto. The simpleton from Texas had the media handing him the nomination just a year ago and he screwed it up…by being himself. Seeing Beto speak was like watching someone have a seizure, audiences weren’t sure if they should run up on stage and shove a wallet in his mouth so he didn’t swallow his tongue. His campaign ended up with the record for setting the largest pile of money on fire in history, so that’s something. He will be missed.

Cory Booker just dropped out on Monday. He was still running the way a professional sports team has to play out the season after being eliminated from making the playoffs. But make no mistake, he’s been done for a while, he just wasn’t over till now. He joins the ranks of Steve Bullock, Joe Sestak, Wayne Messam, Tim Ryan, Seth Moulton, Jay Inslee, and the rest of the clown car, all of whom are missed.

The 2020 Democratic field has been a buffet of mediocrity – everything to choose from, and nothing anyone really wants. Pour one out for those we lost, and save a little for those we’ve yet to lose. They will all be missed…by someone…probably.