Derek Hunter
|
Posted: Sep 24, 2019 12:01 AM
Share   Tweet
The opinions expressed by columnists are their own and do not necessarily represent the views of Townhall.com. 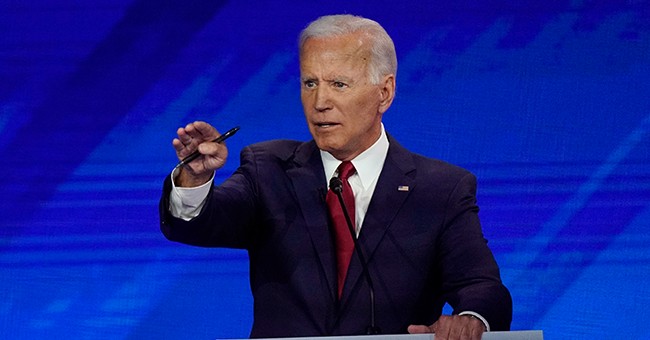 Joe Biden’s now famous run-in with notorious gangster “Corn Pop” was a scene right out of West Side Story, The Outsiders, or some other overrated movie that hasn’t aged well. Speaking of things not aging well, Biden’s brain is not having a good decade. From his claims of intimate involvement with the civil rights movement to his opposition to the Iraq War from its start, Joe is very creative with his own history. In that vein, I thought I’d help him by clarifying a few parts of his biography before he makes the mistake of thinking these things happened to him.

Biden did not team up with his dance partners and a group of teenagers to save a community center from an unscrupulous developer, that was Breakin’ 2: Electric Boogaloo.

As a child, Joe was not forgotten by his family as they left on a vacation. He also didn’t fight off clumsy burglars called the “Wet Bandits.” As much as his family may have wanted to leave him behind, that was Home Alone.

He also wasn’t involved in an attempt with his buddies to lose their virginity that involved a floating brothel and an overzealous guy teacher, that was the Porky’s movies.

Joe Biden also didn’t get a merit-based scholarship to law school, nor did he graduate in the top half of his class, both of which are things he’s claimed.

Our former vice president is a lot of things – goofy, enjoys sniffing women’s hair, a little too touchy. He might even be corrupt, who knows? What he’s not is a sexist pig.

For all the handsy, hair sniffing stuff that’s been seen in public, there aren’t any rumors of Biden cheating on his wife. Lord knows Congress is littered with people sleeping with staff, lobbyists, and pretty much anyone willing. In Biden’s decades on the Senate, his name wasn’t floated in those terms.

What is woke sexism? Like everything else that is “woke,” it’s whatever the person making the charge wants it to be.

Last weekend, woke sexism was a woman named Lyz Lenz being offended Biden called her “sweetheart” after she interviewed him at a candidate forum on LGBTQ issues.

Vox described the “offense” by writing, “Lenz wrote on Twitter afterwards that Biden also called her ‘a real sweetheart’ backstage. She later called these interactions ‘a little condescending,’ and told the USA Today, ‘It’s 2019, you shouldn’t be calling women sweethearts.’”

I could think of a lot of things to call someone who considers a 76-year-old man calling them “sweetheart” to be “condescending,” but none of them are suitable for print.

Can you image being such a miserable person? Joe Biden can’t. And that he can’t while still scrambling to win the support of people who are is why he’s not likely to win the Democratic nomination.

At the start of the campaign, Biden had his best shot to put the fight away. As he was getting into the race, the woke-set was doing what they do – calling everyone and everything racist/sexist/homophobic/etc. Rather than stand up to it, call it out, and separate himself from the herd of candidates actively trying to appeal to the angry, protest everything wing of the party, Biden hopped in the crazy conga line and tried to join them.

The only problem is, Joe Biden can’t appeal to that crowd. He’s too old, too white for it. No one on his staff seems to realize that simple fact.

What Biden should have done is stood up to the mob; have his own Sister Souljah moment. A speech from Joe about how everything is not racist, how this is not a horrible country founded to protect the white patriarchy, how the “system” is not designed to keep people down, would have catapulted him into an insurmountable lead.

Believe it or not, there are Democratic voters yearning for a sane voice to speak up within the party leadership, to shun the radicals. In the current field, the only person with the ability to do it was Joe Biden. He went the pander route.

Biden’s lead in the polls is based on name recognition, it’s a mile-wide and an inch deep. Why would anyone get excited about a candidate running on slightly different versions of the things everyone else is running on? Especially when the party activists are conditioned to prefer what someone looks like more than what they stand for.

For all his gaffes, this was Biden’s biggest mistake.

Joe could have separated himself from the crowd, become the adult in the room to the blue-collar, non-taking-to-the-streets-over-everything Democratic voters. Now he’s just the old guy saying things like, “In prison, the determination should be that your sexual identity is defined by what you say it is, not what in fact the prison says it is.” Who’s that appealing to?

Biden’s moment has passed. As has been the case throughout his entire career, he brought it down himself. Like many of the Democrats running, it’s unclear what he truly believes; the only thing that’s clear is he will do or say anything to win.

After 50 years in politics, all he had to do was stand up and be the adult in the room, and the second oldest man in the race couldn’t bring himself to do it. He may still squeak out the nomination (third time is the charm), but in winning it how he'd win it, he will lose more general election voters than he can replace. Maybe he can wrap a chain around his arm and intimidate his way to victory, like he did with Corn Pop.