A Party Of Frauds

Derek Hunter
|
Posted: Aug 11, 2019 12:01 AM
Share   Tweet
The opinions expressed by columnists are their own and do not necessarily represent the views of Townhall.com. 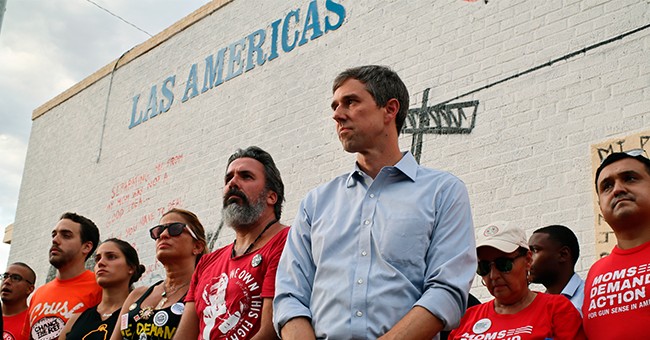 Anger can be a good thing, it lets you know what is really important in life. If something makes you angry it means you care about it. But in the last few years, anger has become a commodity in politics, and the market has been flooded with counterfeits. Virtue signaling – the phony outrage that fuels campaigns and TV ratings – is that counterfeit, and it’s funding the Democratic Party machine. It needs to be destroyed.

Not a single speech or statement delivered this week by a Democrat was sincere. The indignation against the President, the accusations of Donald Trump being a “white supremacist” was as genuine as a relationship on the Bachelorette.

Beto O’Rourke “suspended” his campaign to hang around where the media was in El Paso. He spent more time on camera than many hosts.

Claiming he wanted to help the city heal, the failed Senate candidate repeatedly hurled allegations of white supremacy at the President every chance he got. On what planet is that helping people heal?

It’s a cynical gambit, but he’s not alone. Every candidate, to one degree or another, has accused President Trump of complicity in mass murder. Families are grieving, victims are still in the hospital, and politicians are using their pain for themselves and telling the world that the President of the United States is responsible for it. It’s sick.

While the liberal cable news networks set up shop in El Paso last week, the Dayton shooting, on the other hand, was quickly fading from the news. It had been committed by a devoted leftist progressive, an Antifa fan and supporter of Elizabeth Warren. That doesn’t help Democrats, so it might as well not have happened. The networks that lost interest in the attempted mass murder of Congressional Republicans by a Bernie Sanders devotee before Congressman Steve Scalise was off life support, were bored again. (The New York Times, always ready to blame Republicans for anything, is still unclear about the committed left-wing shooter’s motives even though law enforcement and anyone with half a brain is not.) Once the President’s visit to the city was over, the coverage began to disappear.

Opportunism, on one hand, inconvenience on the other.

MSNBC became wall-to-wall El Paso talk from Morning Joe to the end of their day, as did CNN. I used the word “talk” because there was no news, nothing new being discovered. There may have been a guest or two who offered mild pushback against the narrative that the President caused the attack, mostly over the general sense of his rhetoric on securing the border and the use, months ago, of the word “invasion” to describe the, well, invasion at the southern border. There really aren’t that many words to accurately describe a hundred thousand people per month entering a country without permission, but that word is now equated with some of the worst racial slurs humans ever created because the people whose job it ostensibly is to call out such frauds were wearing the uniform of the team in the left dugout.

The groupthink on the left had everyone, simultaneously, adopting the term “white supremacist.” The word “racist” covers it, but leftists have so overused it that it’s lost all meaning. It’s hard to find anyone outside of the far left who hasn’t been called a racist in the last 10 years by Democrats, directly or indirectly, over things as basic as policy disagreements. To have a Democrat call you a racist became a joke. White supremacist, on the other hand, hadn’t.

It’s perverse, but when your electoral strategy is telling people the system is rigged against them because of their skin color, you have to find some way to absolve them of the hatred the people who buy into your lies naturally develop toward their “oppressors.” Democrats appointed themselves accuser and savior; manufacturing anger and justifying it away.

It’s brilliant, but evil. How effective it ends up being will be determined in the voting booth 15 months from now. And that will be determined by how long people will continue to put up with it and how angry all of this makes everyone else.