Why You Should Vote Today

Derek Hunter
|
Posted: Nov 06, 2018 12:01 AM
Share   Tweet
The opinions expressed by columnists are their own and do not necessarily represent the views of Townhall.com. 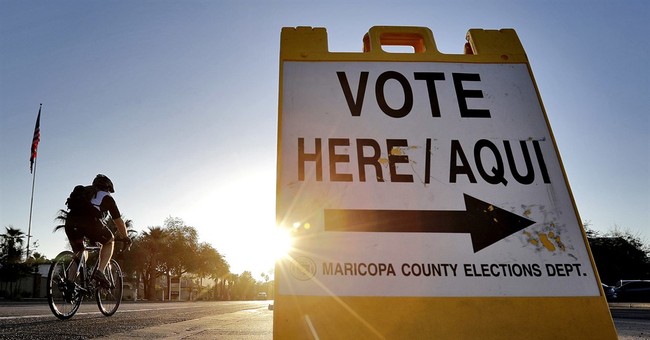 I’m not one to insist people vote, part of being in a free society is the freedom to not participate and I’ve been a non-participator in many of society’s rituals. I only attended a pep rally in high school (because I was performing in it) and no sporting events because school spirit always annoyed me; I didn’t attend my college graduation because I looked at it as a waste of time, but I’ve always voted because I wanted to know I registered my opinions the one time every two years they really matter. A lot of times I was motivated to vote against people, rarely it was for someone. But I always voted, and you should too.

It may sound hypocritical coming from a non-participator, but hear me out. Things like school spirit are fun, I suppose, but pointless. If you went to public schools like I did, you had as much say over where you went to school as you did over who your parents are, your race, or your gender. Pretending your schools was special based upon where your family could afford to live was, in my cynical opinion, delusional.

My school wasn’t anything special, and wasn’t any better than any of the other schools many of my classmates would say “sucked” or get offended by if someone from those schools said ours sucked too. I couldn’t bring myself to care.

Elections are different. Voting is your voice. It’s a marker of where you stand, what you’re for or against. And you should use it because who wins today will matter for the next two years.

I was a tepid, even reluctant voter for Donald Trump. I didn’t vote for him as much as I wanted to be on record being against Hillary Clinton. I thought she was going to win, as did just about everyone else in the country. But I ultimately needed to know that I’d done everything I could do to register my opposition to her candidacy, mostly for myself and my (then future) children.

I didn’t think Trump would govern as a conservative. I have been proven wrong in every way that matters. Now I am proud of a vote I cast without any pride, and I see the difference it made.

Democrats told us 2 percent economic growth was the “new normal”; that manufacturing jobs weren’t going to return to the country, that there was little that could be done about radical Islamic terrorism – all of which was a lie.

President Trump has destroyed each of those lies. We’re staring down the barrel of 4 percent growth, full employment (including record low unemployment for blacks and Hispanics), 32,000 new manufacturing jobs were created last month alone (with 434,000 having been created under Trump so far), ISIS is a shell of its former self, etc., etc. Every box that matters has been checked and people’s lives are improving as more and more Americans leave government dependence and become self-sufficient.

More importantly, nothing they did would have been achieved if Democrats were in charge of even one part of government.

There’s more, a lot more, to be done. Voting for Democrats, either actively or passively by not voting, is allowing that progress to be stopped, even reserved. Just as you can’t plant a garden and never tend to it, you can’t have an amazing economic turnaround and simply set the autopilot; it must be protected. Democratic Party economics are the locust swarm of economics – they swoop in and destroy everything.

Like psychics, I don’t place a lot of faith in people who claim to be able to predict election outcomes – if they were so able to see the future they’d all be lottery winners. There’s no downside to being wrong when it comes to election predictions (how many people who soiled their sheets in 2016 guaranteeing a Clinton victory are still on TV predicting a “blue wave”?), and it’s mainly done from a writing standpoint as clickbait.

This election will not even be close to decided until the polls close tonight, what you do or don’t do matters. There are people excited over the early voting numbers, but they mean nothing. Who shows up early doesn’t matter, we won’t know until tomorrow if turnout is high or if it was simply that a large chunk of people got voting out of the way before Election Day. Take nothing for granted.

Republicans aren’t running against your parents’ Democratic Party, where both sides are working toward the same basic goals, they just have different ways of getting there. Democrats want to “fundamentally transform” the country, remake our economy in the model of Europe and Latin America. A socialist agenda, which the party now embraces, is an anchor on economic progress. There’s a reason people flee from socialist countries and not to them.

That’s what’s on the ballot. That’s why this election matters.

I understand many of us are disappointed that Republicans didn’t do more, that many people don’t like the president’s tweets, etc. But so what? What they have done is important, and it needs protecting. What they haven’t yet done will never get done if Democrats win. And both of those things are significantly more important than the tone of Donald Trump’s 240-characters-at-a-time thoughts.

Results matter, and we’ve gotten them. If you vote for Republicans today you’re registering your voice on the side of those results. If you don’t vote, you’re voting against the strongest economy we’ve had in a generation.

Lines suck, and waiting in one is a complete drag, but this is your best opportunity to stand up for the progress we’ve made and against those who seek to reverse it. Waiting in a line is a small price to pay. And, no matter the outcome, you’ll at least know that you did the only thing you could to stand and be counted. Protests after you lose are all well and good, the Tea Party was great at making their objections to the liberal agenda heard, but Obamacare still became the law of the land, for example. Mobilizing is great, but nothing beats winning and preventing the bad things from happening in the first place. Go vote.

Derek Hunter is a columnist at Townhall and author of “Outrage, INC.: How the Liberal Mob Ruined Science, Journalism, and Hollywood.” To combat how the political left manipulates unsuspecting Americans to the point that they’d believe their lies and act on them, you have to understand how liberals weaponize important institutions against the American people. The book has been praised by Mark Levin, Ann Coulter, David Limbaugh, Dana Loesch, Dan Bongino, Michelle Malkin, Ben Shapiro, Kurt Schlichter, and countless others.

He also hosts a daily podcast, it’s informative, funny and it’s free! Together, his podcast and book will keep you sane and just might help you deprogram friends and family who’ve fallen prey to the mob mentality. Plus, you’ll laugh a lot too.