What’s The Point Of Citizenship Anymore?

Derek Hunter
|
Posted: Nov 01, 2018 12:01 AM
Share   Tweet
The opinions expressed by columnists are their own and do not necessarily represent the views of Townhall.com. 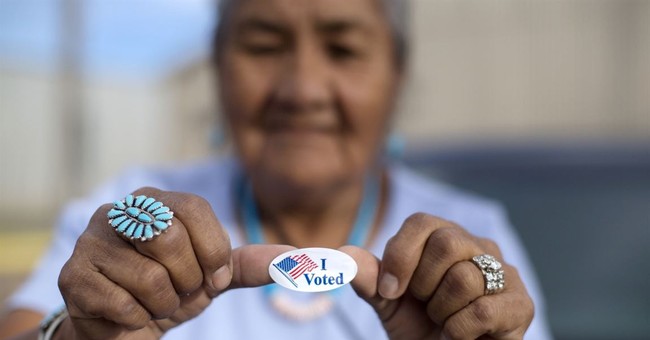 On Tuesday, my wife and I went and voted early, mostly to get it out of the way while my dad and sister are visiting and they could watch our newborn. The experience was pretty much what you’d expect – paid temporary workers trying to remember their training, to varying degrees of success, in a community center’s gym with a bunch of other people looking to check the “civic duty” box. But something struck me this year that made me wonder what the point of citizenship is anymore.

My ballot in Maryland was in both English and Spanish. Maybe it’s been that way for years, I honestly don’t remember. On the way out the door, as always happens, someone tried to give me and my older daughter, a whole 17 months, an “I voted” sticker. I passed because I think they’re stupid and obnoxious – you shouldn’t celebrate doing what you’re supposed to do – but my wife, who took longer to vote because she skipped every race where there was only one person on the ballot, took one. It read, “I voted, yo vote.” It was then it occurred to me that the benefits of citizenship are either going away or pretty much gone.

Don’t get me wrong, I still have pride in the country, but the country is changing significantly, or more correctly it’s being changed, in a dramatic way I’m not sure people are aware of.

Why would a ballot need to be written in English and Spanish when, by law, you’re expected to be proficient in English in order to become a citizen and, therefore, be eligible to vote?

What makes people “Americans” is being diluted and destroyed by Democrats willing to do anything to obtain power, except listen to the people they seek to represent.

There was a time, believe it or not, when immigrants came to this country with the desire to become an American, not a hyphenated American. There were always ethnic enclaves in major cities – a Little Italy, a Chinatown etc. – and immigrants moved there upon their arrivals. It made sense, they had limited to no English skills, so being able to communicate in their native tongue was understandable. But these enclaves were not their landing strips, it was their launching pads.

Immigrants stayed in those enclaves only as long as they had to in order to learn the language, learn what it took to assimilate. Then they moved on.

Now the opposite happens – immigrants are encouraged by Democrats to maintain their allegiance to their native land, to reject assimilation and maintain the cultures they, in many cases, fled. That leads to a nation of people with nothing in common and limited ability to communicate with each other. We never looked alike, but we could talk. It’s getting so we can’t anymore, and liberals love that.

If you never speak to anyone different from you, you get a perverted impression of the world. Just look at CNN and MSNBC. There is no debate there, only slight disagreements. They truly believe Donald Trump is lowering the discourse in this country and spreading hate while calling him Hitler, his supporters Nazis, and fantasizing about horrible things happening to the president, up to and including his assassination.

These same people insist encouraging assimilation into America by people seeking to become Americans is racist. “Celebrate diversity,” they scream, leaving off the implied “or else.”

Diversity based on pigment is the least relevant and interesting thing human beings can be, let alone “celebrate.” Skin color has always been an obsession of racists, and it still is. It’s what we have in common that makes us a nation. But having things in common leads to getting along, and getting along isn’t in the Democrats’ playbook. So they seek to divide so they can manipulate. As I explain in my book, if you can convince people “the system is rigged against them,” and they suffer the setbacks, disappointments, and jerks everyone encounters in life, those setbacks become discouragements from trying in the future. Why try when you believe you literally can’t win?

This creates a mass of people convinced a political party acting on their behalf is the only way to get ahead, to make life “fair.” But life isn’t fair, life is what you make of it. And you don’t make anything of your life waiting for someone else, some political party, to run blocker for you or do your heavy lifting.

Democrats are removing what it means to be an American from actually being an American for their own political gain.

Now the left is actively favoring illegal aliens over Americans and legal immigrants. Liberal jurisdictions across the country are spending untold millions of our tax dollars to defend people here illegally, granting in-state tuition, various forms of welfare benefits (free meals as schools, picking up the tab for their health care, etc.), and voting rights in some areas for local elections (for now).

They tell us illegal aliens are a boon to the economy, which is laughable. Some areas have gone so far as to plea down crimes by illegal aliens to avoid them getting on the radar of Immigration and Customs Enforcement. Would an American get that deal? Of course not.

For an illegal alien to work in this country and “pay taxes,” as we’re told they do, they’d have to steal someone’s identity, someone’s Social Security number. That’s a serious crime with real victims, American victims of all backgrounds, and something for which American citizens would do real time for committing, but illegal aliens committing it is ignored.

So what’s the point of citizenship? We aren’t granted special protections by government officials, we’re subject to our laws. People who break our laws to come here have a political party willing to bend over backwards to make sure they aren’t. Immigrants who come here legally aren’t encouraged to assimilate, they get ballots in their native tongue. How can you fully invest in a country if you can’t communicate in the common language?

I want everyone with something to offer to come here, legally, and become an American. Democrats want anyone to come here, as long as they’re likely to vote for Democrats.

If Democrats regain power next week, what it means to be an American will be diluted even further. We just have to decide if we want to be a nation where it's more advantageous to be here illegally than to be a citizen. Because that’s what’s really on the ballot Tuesday.

To defeat the liberal mob you first have to understand how it was created and how it is manipulated and controlled. Order a copy of Derek’s book, “Outrage, INC.: How the Liberal Mob Ruined Science, Journalism, and Hollywood,” to understand how the political left manipulates unsuspecting Americans to the point that they’d believe their lies and act on them. And subscribe to Derek’s daily podcast, it’s free! Together they’ll help you stay sane and just might help you deprogram friends and family who’ve fallen prey to the mob mentality.