Where Are the Crimes?

Derek Hunter
|
Posted: Aug 23, 2018 12:01 AM
Share   Tweet
The opinions expressed by columnists are their own and do not necessarily represent the views of Townhall.com. 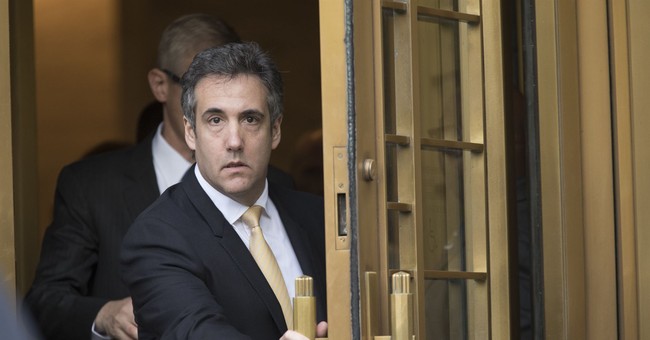 It was Christmas in August for liberals on Tuesday when Paul Manafort was convicted on 8 of 18 charges and Michael Cohen pleaded guilty to tax, bank, and campaign finance violations. Suits were soiled with glee at all the left wing activist organizations – the DNC, DSCC, DCCC, CNN, MSNBC, etc. They all collectively thought they’d “nailed Trump” because the two men were associated with the president. One thing no one seems to understand, or more importantly hope their audiences don’t understand, is that none of what transpired Tuesday actually implicates Donald Trump in a crime of any sort.

The Manafort case is pretty straightforward – everything he was charged with, let alone convicted of, happened years before he’d ever met then candidate Donald Trump. Unless someone involved has a time machine, it would be impossible for the president to have been involved with anything illegal with Manafort.

It’s not being portrayed that way. Journalists, who just a week ago engaged in a mass anti-Trump protest to declare themselves arbiters of truth, won’t portray it that way. The story is and will be covered as if Manafort was in Trump’s inner circle of advisors, not a guy hired to manage the Republican National Convention and stave off any challenges to the nomination (which there were and he successfully ended).

Every story about these tax and banking convictions will mention that Manafort was Trump’s campaign manager. What they won’t mention is how long he was campaign manager, about 2 months, and how quickly he was fired once questions about his foreign lobbying came to light. Those facts don’t fit the narrative that Trump is surrounded by criminals; that his campaign and business are no different than the Mafia.

When complete facts get in the way of the impression liberals want to give an audience they are conveniently ignored.

The truth is pretty simple: Manafort was tried and convicted on these charges for the simple reason that Special Counsel Robert Mueller wanted to apply pressure in the hope that he would “flip” on Trump. Flip on what isn’t really known, nor does it matter. Mueller wants the president, the left wants the president to be implicated in a crime, any crime. So Manafort faced a possible 305 years for tax evasion, a charge that carries an average sentence of just over a year for mortals not associated with the No. 1 target of liberals.

It doesn’t really matter if Manafort goes to prison, he broke the law and should. But don’t ever fool yourself into thinking he is some kind of criminal mastermind who should spend the rest of his life in prison. He’s only facing that because he’s in the way of people who want to destroy a president they hate.

Michael Cohen is a different story, but only slightly.

Cohen was one of the president’s personal lawyers when he was in the private sector. Aside from rambling on TV from time to time, Cohen was never going to enter the political world – that’s not what he does or what he’s made for. He, too, didn’t pay taxes and had issues with banking laws, the specifics of which are irrelevant because they, again, have nothing to do with Trump.

What is relevant, or at least liberals are trying to make relevant, to Trump is the campaign finance violations he pleaded guilty to Tuesday.

But in the guilty plea Cohen claims he committed campaign finance law violations to “influence the election.” This is where the wheels come off.

It doesn’t matter what Cohen thought he was doing, or why he thought he was doing it, what matters is the law. If Donald Trump had Cohen pay off these women then paid him back, that’s not illegal. Anyone, even a politician, can pay off anyone they want to keep quiet. Cohen’s plea says he did it to influence the election, but his motivation is irrelevant. What matters is the money.

If Trump paid to have his lawyer keep these women quiet, he was allowed to. Theoretically he wouldn’t have wanted this public because he’s married with children, and he was running for president and didn’t want it to be an issue. Whether he did it or not doesn’t matter, what matters is if he used campaign funds to pay Cohen or he paid out of his own pocket.

He’s allowed to pay people to sign non-disclosure agreements on any topic as long as the money comes out of his bank accounts or that of his business, no matter the motivation (though he’d have several unrelated to the campaign). He can’t use campaign funds to pay Cohen or pay himself back, and there’s no indication that he did. You’d never know this important, deal-breaking distinction if you just watched the Democratic media. They blurred the line between the two like it was Obama’s red line in Syria.

So where are the crimes? Leftists can’t point to any, but they are implying the hell out of one. That’s dishonest, and it’s not by accident.

PS: I want to ask you to consider picking up a copy of my book, “Outrage, INC: How the Liberal Mob Ruined Science, Journalism, and Hollywood.” It explains the why and how of what the left does in ways that haven’t been before, and it does so with a lot of humor. Don’t take my word for it, take the words of Mark Levin, Ann Coulter, David Limbaugh, Dana Loesch, Dan Bongino, Michelle Malkin, Ben Shapiro, Kurt Schlichter, and countless others. Obviously, I have an interest in selling you a copy of the book, but they don’t. Yet they’ve all endorsed it. And, for reasons I don’t understand but am eternally grateful for, people are still buying it. You’ll love it, trust me. Thank you.