Derek Hunter
|
Posted: May 24, 2018 12:01 AM
Share   Tweet
The opinions expressed by columnists are their own and do not necessarily represent the views of Townhall.com. 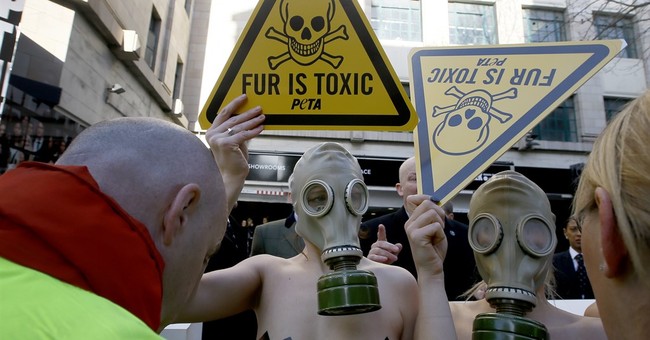 You won’t find anyone who loves animals more than I do. Growing up my family had dogs and cats along with the occasional turtle, gerbil, or fish. It’s a love and tradition I’ve carried into my own family – I’ve converted my wife into a cat person (we can’t have dogs where we live) and our daughter squeals with delight chasing them around the house. That’s why stories of animal cruelty, which appear in the news with disturbing regularity, anger me as much as one of my other favorite targets – media malpractice. Now I’ve found a story that combines both, sort of.

PETA, the People for the Ethical Treatment of Animals, has a laudable mission – to end animal cruelty. But, like most liberal groups, their declared mission and the execution of that mission are often at odds with one another. They are a left-wing group, and like other left-wing groups they run a left-wing crusade against anything that will not conform with their agenda. They’re also raging hypocrites who were exposed 2015 for killing 88 percent of the cats and dogs they “rescued” at their shelter in Virginia. A total of 2,324 animals “put down” by a group that views meat as murder.

Eating meat, farming, raising livestock, selling and breeding pets humanely, and all the other things people legally do with animals for the benefit of humanity is not something that should be banned. Animals, as much as even people like me can personify them, are not people. They should not have the equivalent of human rights, as PETA and other militant groups would like. If you want to eat grass and bark off a tree, knock yourself out. But if you try to mandate I do the same, I may knock you out.

PETA has exposed some serious torture of animals in the past, but like the liberal social justice warriors (SJW) roaming college campuses in desperate search of “hate,” when they don’t find it they sometimes create it.

College campuses are overrun with fake reports of hate crimes. These little SJWs have their empty heads filled with the liberal lie that the country is overrun with racists, founded on the concept, so they set out to locate and destroy it. When they can’t find it, they justify creating it with a little graffiti or property destruction to “draw attention to the issue.” They’re usually discovered and unrepentant about their actions because they did it in the name of what they consider a “just cause.”

PETA, it turns out, is no different.

PETA’s latest crusade is against PetSmart, the pet supplies company where I usually buy cat and fish food. It has been spreading its propaganda to reporters about some of PetSmart’s services. And, as is often the case, news outlets have only been too happy to comply.

One local Fox affiliate website had to correct PETA’s false claims that the PetSmart employees were charged with felonies and deleted PETA’s statement entirely, finding it so lacking in credibility. Another story that saw its wheels come off was the sad death of Fabio (no, not the romance novel cover model).

Fabio was a family dog in Florida that died during a grooming session at a PetSmart. PETA immediately blamed the company and journalists were all too eager to report that narrative. You likely heard about it, it made the cable networks. It turned out, however, that Fabio didn’t die from abuse from the groomer, his heart was riddled with heartworms which led to his demise. You probably didn’t hear that part of the story because, just like newspapers, the correction gets only a fraction of the attention the sensational original receives.

Why didn’t any of those reporters who ran with the abuse narrative wait until the facts were known before reporting the story? A) that seemed a little too much like work, and B) they were all too happy to carry water for the ideological fellow travelers in PETA.

For its part, PETA remains undeterred. The have a running blog on their website that pushes the narrative that chain pet stores are nothing but slaughter houses with cleaner floors, which seems like a pretty bad business model if you ask me.

According to PETA’s blog, “The animals they sell come from cruel mass-breeding mills, where they’re crammed into crowded bins; deprived of food, water, and veterinary care; and killed by being bashed against tables or gassed in coolers.”

They continue, “The grooming businesses shove animals through quickly and often carelessly. Profit is their priority, and as a result, countless animals have strangled after being left unattended on grooming tables; overheated in cage dryers; been badly cut on the ears by clippers; and been screamed at, roughly handled, punched, kicked, and strangled by frustrated, impatient, and abusive groomers at these chains’ stores.”

Is there any business were profit is not a priority? To leftist, profit is a bad thing. And if “countless animals” have died, why aren’t those stories reported? Fabio’s death sure was, and that turned out to be fake news.

Maybe, just maybe, they’re more interested in advancing their slice of the liberal agenda than they are in conveying the truth? Like the college SJWs, they’ve convinced themselves that a real but small problem is an epidemic and they’re willing to fudge a few facts for the “greater good”? Besides, it’s likely good for fundraising.

As for why reporters swallow the bait, that part is easy – they’re on the same team. A story much more likely to be accepted as fact by liberal journalists if it could lead to higher taxes, more regulation, or generally more government control. Fact checking is for suckers. Liberal groups like PETA know this and exploit it.

The real problem is animal abuse is real. It’s not systemic or corporate, it’s depraved individuals committing unspeakable acts of cruelty and, it seems, PETA itself. But combating that, rather than “evil corporations,” isn’t the key to attention or money. Both of those things are the real lifeblood of left-wing outfits like PETA.