How Do These Liberal Monsters Hide In Plain Sight?

Derek Hunter
|
Posted: May 10, 2018 12:01 AM
Share   Tweet
The opinions expressed by columnists are their own and do not necessarily represent the views of Townhall.com. 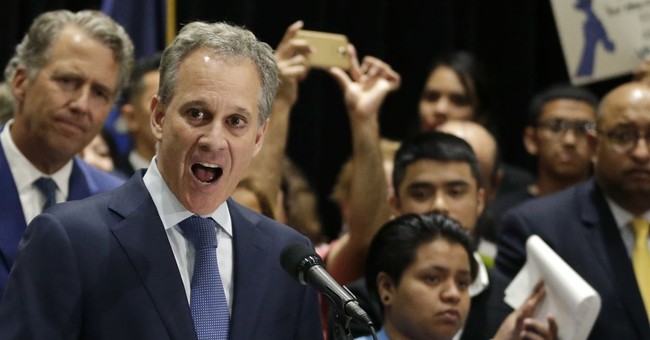 It was a devastating story that took out one of the most powerful men in Hollywood in a matter of days and exposed an entire industry’s complicity in his sexual perversions, but it didn’t come from a major news network, organization, or famous journalist, it came from a mildly popular magazine and a reporter more famous for who his parents are than his reporting. That reporter, Ronan Farrow, and that magazine, The New Yorker, struck again Tuesday, this time exposing the most powerful state Attorney General in the country, causing his resignation in disgrace in a matter of hours. But more than exposing hypocritical Democrats as the misogynistic monsters they are, these stories and their aftermaths exposed just how incestuous and complicit the mainstream media is in all of it.

Harvey Weinstein wasn’t hanging out with and donating to Republicans, and disgraced former New York Attorney General Eric Schneiderman wasn’t the type to roll with his political opponents. No, both were creatures of, and stars in the world of progressive liberal politics.

Moreover, they were celebrities in New York City’s liberal social circles, the same circles of power and money the media elite call home. So how was it that both men, and many other like them, were able to operate, able to be commit their abuses against women, right under the noses of people whose jobs it is to report on such things?

Part of the answer can be found in Farrow’s story exposing Schneiderman.

In one of the most disturbing passages in a story full of disturbing passages, Farrow writes of how one of the women sought advice from her friends about how to handle Schneiderman’s abuse after their break-up. “After the former girlfriend ended the relationship, she told several friends about the abuse. A number of them advised her to keep the story to herself, arguing that Schneiderman was too valuable a politician for the Democrats to lose.”

Yes, as a “leader of the #Resistance,” Schneiderman had made quite a name for himself in the Democratic Party. Plans were already being discussed for higher office. A lot of hopes were hung on his shoulders that he would find ways not only to damage President Donald Trump’s agenda by suing over nearly every action his administration took, but by pursuing state charges against as many Trump associates and family members as possible. A presidential pardon might cover federal charges, but they can’t do anything against state charges, liberals routinely smirked.

Those smirking liberals include many of the media elite, those who haunt Manhattan and the Hamptons cocktail party circuits where the likes of Weinstein and Schneiderman reigned. (This is something I discuss at length in my forthcoming book, Outrage, INC: How the Liberal Mob Ruined Science, Journalism, and Hollywood, coming out June 19. Check it out and pre-order a copy now, you’ll like it!)

So how did no one notice? How did none of them at least hear stories, rumors about the perversions of these men?

In the case of Weinstein, everyone did. After he was exposed, the stories about having heard stories became commonplace, with many careers in Hollywood being impacted through silence.

The Schneiderman case is still fresh, reports of circulating rumors have yet to be discovered. But that passage from Farrow about him being “too valuable a politician for the Democrats to lose,” leaves little doubt that such knowledge was had. That sentiment does not occur in a vacuum.

The world in which Schneiderman and Weinstein operated is small, people don’t move into or out of it with regularity. Dating in insulated, powerful circles means people tend to know much of the business of others. To put it another way, people talk. That’s how rumors spread.

So how is it that no one in the media heard anything about either of these men until their stories were reported? How was it “news to them”? It is, after all, the jobs of these people to observe, to gain information, then disseminate that information to the public, particularly information about the powerful and politicians.

The reason is rather simple, and it’s one of the main complaints about the White House Correspondents’ Dinner – that the media elite are too close, too friendly with the people they cover, specifically liberal politicians, to cover them honestly.

Even if they were only acquaintances, no one wants to be the skunk at the garden party. Operating in the same social circles pollutes the relationship between journalist and politician, even when they agree politically. That means rumors are ignored or laughed off, no matter how many times they’re heard or their source.

It’s highly unlikely the people on cable news who clutched their pearls over Farrow’s stories were doing it because they were blindsided by the allegations, but more likely they were shocked someone reported them. How many more secrets are they concealing because of their friendships? How many more monsters walk among them, protected because they’re “on the team”?