All Different Types Of 'Holes'

Derek Hunter
|
Posted: Jan 14, 2018 12:01 AM
Share   Tweet
The opinions expressed by columnists are their own and do not necessarily represent the views of Townhall.com. 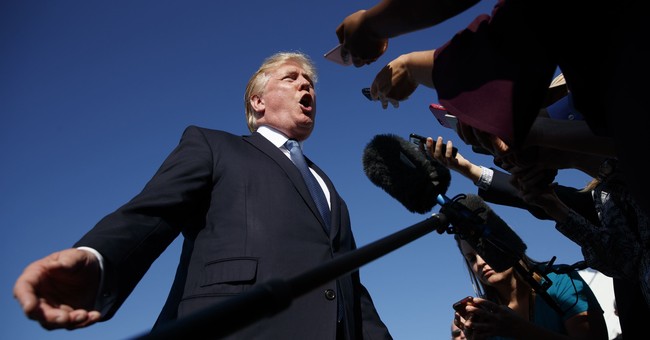 The media’s fainting couches were fully engaged and the pearls were tightly clutched as word leaked out of a private White House meeting that President Trump referred to some of the worst places on Earth as, um, (how I can put this in a way that will get past the editors?), uh, feces-holes. It was inartful. It was crude. But it was in private, and it was, unquestioningly accurate.

There are some really awful places in the world with horribly corrupt governments and oppressive economies. There is also a limit to who we can, and should, admit to this country to live, work and possibly become citizens. That idea is now racist, not because President Trump used an obscene term in the Oval Office, but because liberals, in and out of the media, simply declared it to be.

These leftists, who are advocates of open borders, proudly proclaimed their outrage over the president’s remark and ascribed racist motives to it because admitting the validity of what he said wouldn’t advance their amnesty narrative. One CNN contributor even went on a racial slur-fueled tirade on air, to the applause of liberals, to paint Trump as a racist. It wasn’t Trump using words like “n*gger,” “sp*c,” “sl*nt-eye,” and “w*tback.” It was a member of the media in good standing.

Only one journalist, CNN’s Jake Tapper, bothered to do some real reporting on what is alleged to have happened in that meeting. The rest simply served as stenographers for the most appropriately named man in the U.S. Senate, Minority Whip Dick Durbin from Illinois. What Tapper found barely resembled what the press took on faith from the Senate’s No.2 Democrat.

The rest of CNN, and the rest of the media, was a “Haiti-storm” of anger and left-wing fever-dreams. In short, they were themselves.

The Associated Press ran to Haitians in the US for comment (weird how they’re here and not there, right?). Unsurprisingly, the AP couched Trump’s words as an attack on immigrants, not criticism of countries, because the narrative had been set.

Unasked by the AP: If these countries are such wonderful places, why are people willing to risk their lives and the lives of their children to leave? Surely a nation known for its poor eating literal dirt cookies with rampant crime and corruption will replace the Hamptons as a vacation destination for all of these virtue signaling coastal snobs, right?

Some will go to report from there, and they’ll do so with armed security escorting them, just off camera, and they’ll extol the virtues of extreme poverty.

It’s the same old playbook leftists always use, complete with what is perhaps the dumbest mantra of the left – our diversity is our greatest strength.

Diversity is neither a strength nor a weakness. It just exists. If you are on a sinking boat, would it not sink, or sink slower if there are a bunch of different skin tones among your fellow passengers? Of course not. It’s about individuals, not the color of those individuals. Did the Golden State Warriors NBA championship last season suffer, was it less championy, because the team doesn’t have anyone from China and Ireland on it?

But liberals see diversity as a political strength because it allows them to divide people, paint various groups as victims and mobilize them under the banner of a nebulous threat only they can protect people from. It’s worked out horribly for the people who fall for it, but it’s kept Democrats in mayor’s offices from coast to coast.

I grew up and went to college in Detroit. I love Detroit. But Detroit is a feces-hole. If you can find a non-gentrifying neighborhood with people still living in it, a lot of them would agree. I and the millions of others who left didn’t leave the city because we were overwhelmed with opportunities and just couldn’t handle it.

Acknowledging this reality is not racist. Aside from the president’s choice of words, which in a private meeting with other adults shouldn’t matter, what he said was true. People from those countries shouldn’t be banned from immigrating to the U.S., nor should they be favored. Each and every person looking to immigrate here should have to answer one simple question: What do we get out of it?

We can’t be the world’s life raft. People have to improve their own countries. But we should welcome people who will add to our country, wherever they come from. Chain migration and diversity lottery visa programs do not do this. They actually reward people based on their country of origin. If punishing people for it is wrong, which the president didn’t suggest, then rewarding them for it should be too.

But the American political Mutaween in the media will never admit that. Just like they’d never admit that this country needs a lot of things, but none of those things are low- and no-skilled workers. Our public school system churns out enough of those on its own.

Hopefully this teaches President Trump a lesson: You can’t trust any Democrat in Washington. They aren’t your friend. They don’t want to work with you and never will. Don’t compromise with them for the promise of future action. It won’t happen. Better no deal than a bad one.

Democrats are putting concerns for non-Americans ahead of Americans; voters will catch on to that. And if they’re so concerned about how our fruit and vegetables will get picked, or how wealthy liberal’s lawns will get mowed, might I suggest we make it a little less comfortable for there to be “jobs Americans won’t do”?

A legitimate welfare work requirement that has people doing real hard work might just inspire people to work a little harder to find a different job. Then, and only then, when we’ve assessed the country’s true need for unskilled workers and determined we can’t meet it, should we lower the bar to welcome in people qualified only for those positions.

That’s not racist. That’s not bigoted. That’s common sense. Our immigration policy, our law, is not based on a fundraising poem nailed to the base of a gift from France. It’s based on what it should be – what’s best for the country. These pearl-clutching, virtue-signaling journalists and politicians, on both sides of the aisle, might want to try to remember that.

Some truths are universal, that there are feces-holes here on Earth is one of them. Another is there will always be other types of holes willing to do anything, to say anything, to advance their political agenda.