Liberals Got Their Blood, Will It Be Enough?

Derek Hunter
|
Posted: Jun 18, 2017 12:01 AM
Share   Tweet
The opinions expressed by columnists are their own and do not necessarily represent the views of Townhall.com. 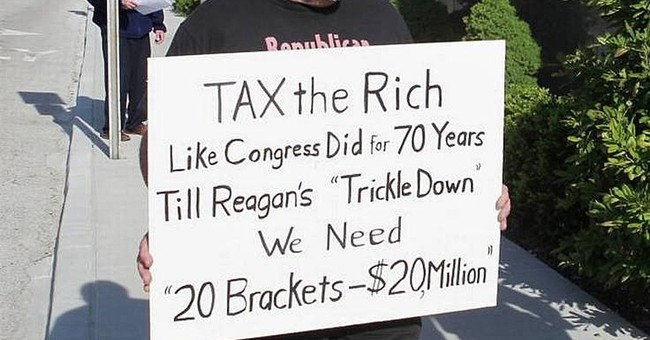 When I wrote two weeks ago about how liberals would not stop until someone got killed, I was hoping it was more of a warning than a prophecy. Unfortunately, it was not.

But the actions and words of leftists in the wake of the attempted slaughter of Republican members of Congress –for the sin of not being Democrats – has done nothing to bring about the moment of reflection one might expect from people with blood on their hands.

Thankfully, the only life lost was that of the progressive terrorist who sought to embody the attitude of the media and the Democratic Party. But no sooner had the echoes of the shots stopped reverberating than that attitude returned.

Liberal journalists and activists took to their Twitter accounts to blame everything except the reality that their twisted fantasies came true.

But it did come true. And all the editorials and proclamations in the world will not change that.

Worst of all, the “paper of record,” the paper that sets the agenda for the mainstream media, the glorified birdcage liner that announced its new slogan this year to be “the truth is more important now than ever,” took the attempted mass murder as an opportunity to rewrite history for a second time this week.

In the wake of a mass-political assassination attempt the Times ran an editorial entitled, “America’s Lethal Politics,” that attempted, once again, to blame Sarah Palin for the shooting that killed six and seriously wounded former U.S. Rep. Gabby Giffords, D-Ariz., in Tucson in 2011.

The editorial board of the Times actually wrote, “In 2011, when Jared Lee Loughner opened fire in a supermarket parking lot, grievously wounding Representative Gabby Giffords and killing six people, including a 9-year-old girl, the link to political incitement was clear.”

It was? Because it wasn’t all that clear once it was discovered Loughner was a mentally unstable George W. Bush-hater.

The Times continued: “Before the shooting, Sarah Palin’s political action committee circulated a map of targeted electoral districts that put Ms. Giffords and 19 other Democrats under stylized cross hairs.”

That wasn’t “clear” when, in the pages of none other than the New York Times, it was made clear he’d had a history with Giffords pre-dating Palin’s website by years.

Not satisfied to bastardize reality, the Times wrote:

“Conservatives and right-wing media were quick on Wednesday to demand forceful condemnation of hate speech and crimes by anti-Trump liberals. They’re right. Though there’s no sign of incitement as direct as in the Giffords attack, liberals should of course hold themselves to the same standard of decency that they ask of the right.” (Emphasis added.)

So a map of the country with some marks on it no one ever even suggested Loughner saw, on a website there is zero evidence he ever visited, is “direct incitement.” But years of claiming Republican want to kill children, the elderly, the poor, the middle class, animals, vegetables, the planet and anything else you can think of is of little to no consequence?

Comparing the president of the United States to Adolf Hitler, Josef Stalin and any other monster you can think of had no impact on left-wingers?

The Times eventually changed its editorial, long after it had printed and distributed millions copies in the paper edition, tempering its smear of Palin (likely after lawyers made the editors aware of possible liability), but the damage was done.

Later in the piece it required a further correction. “The editorial also incorrectly described a map distributed by a political action committee before that shooting. It depicted electoral districts, not individual Democratic lawmakers, beneath stylized cross hairs,” the editors wrote.

Hilariously, the Times eliminated its “public editor” position, the man responsible for holding the paper to journalistic standards, only two weeks ago. Perhaps speaking to someone outside the bubble might’ve spared the paper the embarrassment of its hatred spilling out on its pages again.

Make no mistake about it, James Hodgkinson is as much a committed man of the left as the editorial board of the Times. He’s the spawn of every fever-dream MSNBC airs on a nightly basis, and the network is trying to wash off its close association with him as fast as possible.

But it won’t wash off. Hodgkinson can’t be dismissed as a simple lunatic the way Loughner is.

Hodgkinson’s social media posts don’t show an insane person; they echo the pages of the New York Times, the Washington Post, Mother Jones, Slate and every other left-wing rag. His words have been spoken on CNN and MSNBC to a chorus of “amens.” He was onboard with what has become the mainstream of the Democratic Party. He was a true believer.

Since the movement that created him is actively refusing to recognize its role in that birth, there’s no reason to believe it will change its ways. Leftists aren’t willing or able to pump the brakes of hate for differing opinions. Simply wounding Republicans, it would seem, no longer is enough.

Leadership on the left remained mostly silent in the face of their followers’ violence around the campaign, the inauguration and college campuses across the country. When they weren’t silent, they were blaming Republicans for the sin of existing and, therefore, provoking the violence against them.

In other words, liberals don’t care.

They won’t be shamed into being decent human beings. If the attempted mass murder of Republicans by one of their own didn’t result in 24 hours of honesty and civility, why would anyone think the next 24 days would be any different? Or any day after that?

It won’t be. The only way to really hurt the left is through the voting booth and to put conservative judges on the courts. Remind the American people of who these leftists are, every single time they expose themselves, then relegate them to the cautionary tale section of history books.