What A Horrible Country

Derek Hunter
|
Posted: Jul 28, 2016 12:01 AM
Share   Tweet
The opinions expressed by columnists are their own and do not necessarily represent the views of Townhall.com. 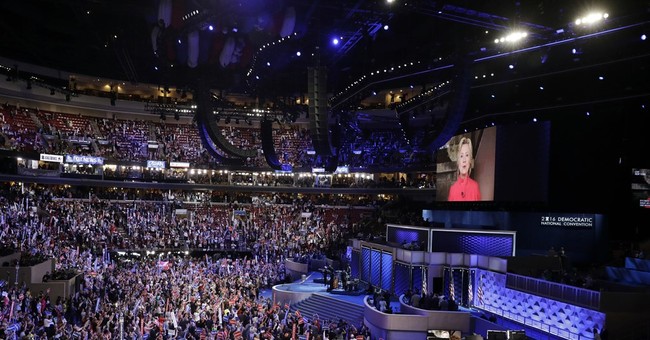 I’m in Philadelphia, sweating to death in the climate change (which used to be called “summer”) and learning just how horrible this country is. Who knew?

My takeaway from the Democratic National Convention so far is that we’re a sexist, racist, homophobic country full of monsters hunting young black men, sex traffickers, and greedy people … and those last two weren’t a reference to Bill Clinton. The worst part is it’s “systemic,” meaning it is part of the fabric of our nation, according to these progressives. It’s part of the foundation upon which this country was built, and if the foundation is rotten the whole house has to go…

The Democrats will tell you they love this country, but they talk about it the way those 9-1-1 tapes “showed” OJ loved Nicole.

I haven’t heard many good things about the United States so far. It’s mostly been complaints.

Name an ethnic group, and the Democrats have pandered to its grievance.

“The system is rigged” shouted U.S. Sen. Elizabeth Warren, D-Mass., after recounting her rise from nothing to being a millionaire. Not too rigged obviously.

Warren also railed against Donald Trump for seeking profit from foreclosed properties, which just so happens to be how she made a nice chunk of her fortune. The only difference is Trump never pretended to be a minority to get a job. Maybe Warren’s Indian name should be “Whiter Than Fresh Snow”?

Cory Booker, D-N.J., talked about how “tolerance” is no longer good enough; “love” is now demanded. So you can’t just not care what someone else does, no matter how weird or repugnant you may find it. You must love it and them to realize what America is supposed to be. Pass.

Bernie sold out. He’s always been crazy, but he was honest. Or at least that was the spin. Yet to whiff the throne of power and get some nominal changes in the unimportant platform, he flipped and endorsed Hillary.

His supporters, to their credit (though they’re crazy too), were having none of it. What the media got wrong about Bernie was thinking he was the leader of a movement. He wasn’t. He was what an aimless fringe of the progressive left glommed onto for a while. He didn’t start them; they started him. He ended him; they continue.

The “Mothers of the Movement” speeches were the most exploitive thing I’ve seen this year. The speakers were mothers of people who either committed suicide (Sandra Bland), were killed by someone they were attacking (Trayvon Martin), or killed by some random guy (Jordan Davis), not the #BlackLivesMatter “victims” of police they were billed as. Nothing Hillary, or any politician, could do would have saved any of them.

Having Michael Brown’s mother up there was a direct slap in the face of police and the concept of law and order. He ripped off a liquor store and attacked a cop, trying to take away his gun for reasons we can only assume weren’t friendly. He was killed because of his violence against an innocent man. You can argue he didn’t deserve to die, but his actions earned it.

There was a string of semi-celebrities singing the praises of Hillary Clinton, which neither surprised nor entertained anyone. Lena Dunham, who sexually abused her younger sister, was greeted as a hero. Then again, so was Bill Clinton, so…

That does lead us to Bill Clinton, who still may be speaking (it’s only Wednesday morning as I type this). He recounted the children’s book version of his partnership with Hillary. I use “partnership” deliberately because the word “romance” does not apply.

We’d heard it all before, and it sounds less believable now.

We only suspected the truth in 1992, when the story of the courtship was first spoken from the stage of a Democratic convention. Numerous lawsuits, allegations of rape and sexual assault, impeachment and eventual confessions later, we know the truth. His speech went about a minute for every woman he’s had or attempted to have an affair with.

Maybe it was penance. Maybe it was payback, Maybe it was the fulfillment of a deal. I don’t know, and I don’t care. Bill loves Hillary, but you’d have to have a mainline drip of Democratic Party Kool-Aid to believe he’s in love with her now or has been at any point in this century.

But that’s what this convention is – a series of well-crafted lies. There are 800-pound gorillas all around the Wells Fargo Arena – not least among them that a party that has declared open war on large banks is holding its convention in Wells Fargo Arena. Denial ain’t just a river in Egypt; it’s a plank in the Democratic Party platform.

All we’ve “learned,” if anything, is Democrats deny reality, believe this country is awful but it’s none of President Obama’s fault, and the system – which they designed, built, and implemented – is rigged against you. But they’re going to fix it…this time.

A common theme has been that the nomination of Hillary Clinton is “historic.” We’ve heard this song before.

Hillary is hammering on how, thanks to her nomination, little girls now realize they can do anything. If you needed her, or any woman, to do something to convince your daughter of that, in 2016, you’re parenting wrong. But that’s the modern Democratic Party, isn’t it?