Derek Hunter
|
Posted: Mar 13, 2016 12:01 AM
Share   Tweet
The opinions expressed by columnists are their own and do not necessarily represent the views of Townhall.com. 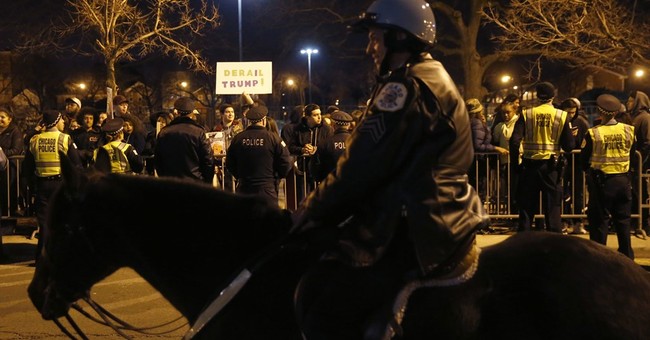 Just about the time I was getting ready to write this column, news broke from Chicago that a Trump rally was canceled because of threats.

I’m not a Trump fan by any stretch of the imagination. If you’ve been reading my columns, I’ve been quite critical of his unwillingness or inability to speak in specifics on important policy issues. I sympathize with conservatives who oppose him from a policy angle.

But what happened in Chicago is different.

It was portrayed as a protest specifically against Donald Trump, but these self-entitled progressive monsters would’ve eventually gone after whoever the Republican candidate with the most delegates was because it’s what they do – they try to suppress, then oppress, anyone who dares to says anything their feeble minds deem unacceptable.

Granted, Trump hasn’t helped the political atmosphere – there isn’t anyone in the race, Democrat or Republican, he hasn’t called some pejorative term. But it used to be the words that didn’t hurt you, it was the “sticks and stones” you had to look out for. Now progressive Democrats use sticks and stones (and fists) to combat words they don’t like.

Reagan would be far more acceptable to Republicans today than John F. Kennedy would be to Democrats.

In today’s Democratic Party, which has shed its center like a snake sheds its skin, JFK’s anti-communist views and his use of tax cuts to stimulate economic growth would be fought at every turn. His “Ask not what your country can do for you” speech would have been interrupted by protesters demanding a slice of someone else’s pie. Not only could JFK not win the nomination of the current Democratic Party, he would be ashamed to be a part of this party.

What was on display in Chicago was anti-American. It is also the new American left.

That riotous mob in Chicago is progressive, and the petri dish from which this modern progressive mob springs is the college campus.

Children are being taught they have a right not to hear anything they disagree with and that this right supersedes someone else’s right to say it. Yet these delicate shells of people, these soft-boiled eggs, feel compelled to go beyond not attending an event to stopping the event from happening in the first place. As if their tenured-teacher-implanted “safe space” is a fragile black hole, sucking up words whether they’re said directly to them or simply nearby.

Americans don’t shut down speech with which they disagree; they don’t seek to punish the speaker. That was the realm of communists, fascists, socialists, Nazis… progressives.

The progressive movement is a branch of the same tree as all those detestable philosophies. The others took deeper root in Europe, but the progressive movement found its home here. Based on division, envy and racism, elevating the concept that an elite – our betters – are the only ones who can pull us back from our own self-destruction, progressivism instills hatred through jealously and lies.

Colleges are the perfect grounds for these lies to grow – open minds easily fertilized with the manure spread by those entrusted to fill them with knowledge. They’re a standing ignorant army, desperate for a cause, with a hair-trigger.

We see it in every campus hoax, the alleged hate-crimes exposed as a fraud perpetrated by those protesting it. They’re told by progressives this country is racist, founded on racism …  that it’s in our nation’s DNA, as President Obama said. So they hunt for it because they’ve been told the only life worth living is a life seeking “social justice.”

And they do this, perpetually unaware the largest perpetrators of injustice in the United State in 2016 are the people they see upside-down in the silver spoon they were born with when they were blessed to be born at this time in this country.

They have been lied to by people society imbued with trust – their teachers, as well as by the media and the Democrat Party. But ultimately, they are responsible for themselves.

The Nazis were not absolved of their guilt because they were seduced by promises and believed the scapegoating; ultimately they made a choice. These new Brownshirts, while falling for the same lies, are just as responsible for their choices.

Only difference is they’re paying thousands of dollars per credit hour for the privilege.