A Felon By Any Other Name

Derek Hunter
|
Posted: Jan 31, 2016 12:01 AM
Share   Tweet
The opinions expressed by columnists are their own and do not necessarily represent the views of Townhall.com. 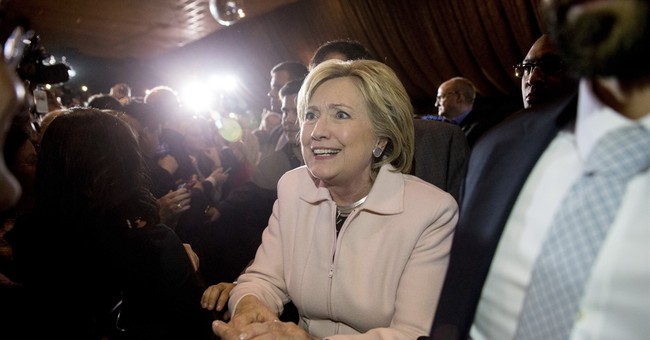 President Barack Obama’s friend William Ayers famously said he was “guilty as sin, free as a bird” after his acquittal on charges related to the Weather Underground, the domestic terrorism group he co-founded. The unrepentant Ayers and Hillary Clinton have that veneer of Teflon in common.

Were her last name anything other than Clinton, Hillary would be indicted today. Actually, she would have been indicted long ago and sitting in prison today. But her last name is Clinton. As such, she’s on the verge of becoming the nominee of the Democratic Party for president.

“What a country, America,” to finish quoting Ayers.

What a country indeed. And what a disgrace.

The Clintons always have been about one thing – the Clintons.

Although there is a certain degree of narcissism necessary to run for public office, and an even healthier dose required the higher up the power ladder one climbs, only the Kennedys rival the Clintons in their naked lust for power and thwarting of the law.

At least the Kennedys made their money first, then went into politics. Politics was a way to pass the time and “serve,” as much as narcissists serve anyone other than themselves. The Clintons, on the other hand, have used politics as a means to wealth and power.

That, in and of itself, should be enough to turn off voters or at least arouse suspicions. But the Clintons, like the Kennedys, have the media on their side and a circle of sycophants willing to blatantly lie to protect them.

In the case of the Kennedys, after the assassinations of John and Robert, that circle rolled into a legacy machine that renamed half the schools in the country after serial philanderers. President Kennedy was so brazen he reportedly carried on an affair with an East German spy. When you start blurring the law in one area, there is nothing stopping you from stepping over it in others.

Unlike the Kennedys, power was never taken for granted by the Clintons. Politics was as much a pastime as a calling for the Kennedys – as it sometimes is for those who have so much money they don’t have to work. The Clintons had to obtain theirs on both fronts.

Being a senator from a famous family is a much more visible path to walk than the corridors of power in Little Rock. The governor’s office in Arkansas offers much more opportunity for corruption, especially when your interests stretch beyond simply accumulating women. It affords you, with little notice, the opportunity to turn $1,000 into $100,000 through cattle futures when normal people would’ve been required to invest $12,000 for that chance. It then allows for an unchallenged lie to explain it away.

Were Hillary anyone else, any of her schemes or scams would’ve landed her in prison. Were the media honest brokers interested in truth-seeking, they would’ve investigated the Clinton rabbit hole in the last century and spared us the national security breaches we’re seeing today.

That a serious candidate for president can be under FBI investigation for deliberately compromising national security and it barely rates a blip on the media’s radar is a scandal. That there were emails on Hillary’s server so top secret they would be “too damaging” to release is a testament to just how unsuited for leadership Hillary Clinton is.

The audacity of Clinton’s campaign calling for the complete release of those emails, knowing they can’t all be released and why, is unparalleled in politics and possible only when cloaked in the arrogance of assured journalistic cover. The word “disgrace” doesn’t do it justice.

Were Hillary Clinton named anything other than Clinton, we never would’ve heard of her, and the country would be more secure country because of it. But because her name is Clinton, a woman whose arrogance led her to jeopardize our nation’s secrets is a top prospect for the job that will give her access to all of them. And this story, by next week, will be brushed aside, memory holed, deep sixed.

Anyone else would be indicted by now for what she did, but Hillary Clinton will never face charges. No matter how bad what she did was, she will have to be defeated at the ballot box. Why? Because Hillary’s last name is Clinton.