Welcome To The Party, Pal

Derek Hunter
|
Posted: Jan 24, 2016 12:01 AM
Share   Tweet
The opinions expressed by columnists are their own and do not necessarily represent the views of Townhall.com. 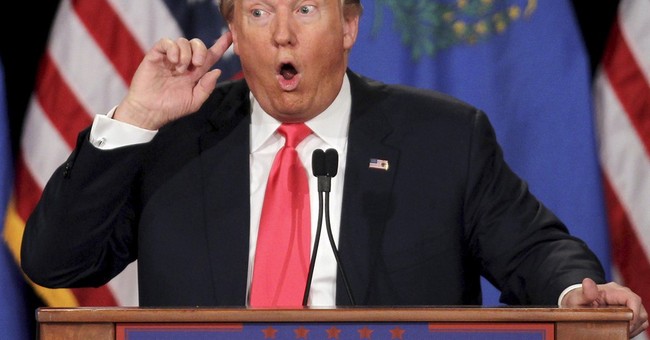 My reaction to the “Against Trump” issue of National Review: It’s about damn time.

It’s not like contributors and editors of the conservative journal had been ambiguous on their feelings toward the billionaire and current GOP frontrunner. They’ve clearly had problems with him from the jump.

But they’d done so individually. Now, they’ve spoken collectively in a way few conservative organizations would dare. To them, I quote John McClane form Die Hard in saying, “Welcome to the party, Pal.”

The appeal of a Donald Trump is obvious:

1) He has his own money, which means he’s beholden to no one.

3) He has charisma and guts enough to broach topics considered radioactive for other candidates.

On those fronts, Trump is an ideal candidate. Unfortunately, behind those positive points lies a mess of unprincipled confusion, pandering and shameless self-promotion all disguised as policy.

It’s been seven months since Donald Trump announced his candidacy, and I still have little idea what he wants to do as president. He wants to “make America great again,” and I’m all for that. But how? In what ways?

President Obama has made it quite clear he thinks America is great right now. How does Trump’s vision for the country differ from Obama’s?

Saying “Obama messed things up” and he’ll “make it better” is great – we need a cheerleader in the White House. But presidents are more than cheerleaders; they’re the coach, too. And although a good slogan is helpful, it’s not a plan; it’s not an agenda.

I honestly have no idea what Donald Trump stands for, but there’s very little in his pronouncements to indicate it’s anything resembling conservative.

On immigration, the issue that made him, he’s all over the place. He wants a wall, and he’s somehow going to make Mexico pay for it. That much is clear, except for the part about how he’ll get Mexico to pay for it. When pressed, he responds that he’s got good friends in Mexico, does a lot of business in Mexico, and he’ll get the government to pay.

Now, we want a wall, and I honestly don’t care who pays for it. It’s that important to our national security and national sovereignty. The “making Mexico pay for it” is, like so much of the Trump phenomenon, simply bravado. It’s how people who are full of confidence talk when they talk about things they have no idea how to do.

Trump has done a lot, especially for himself, so bragging that he’ll simply get something done is viewed as enough by many people. He’s done stuff before – more than anyone else running for president – so he’ll be able to do it again. Never mind that forcing a nation to build a wall it doesn’t want is different from negotiating with municipal bureaucracies and local ordinances to erect a skyscraper. He’s Trump. He does stuff.

But it’s meaningless. It’s the governing equivalent of sleeping in a Holiday Inn Express last night. Would you trust a medical doctor with your taxes? The doctor may be bright and have a lot of education, but it doesn’t mean he knows enough about taxes to keep you out of prison. Yet that is a large swath of Trump’s appeal.

Additionally, Trump’s immigration “plan” is continually evolving. Aside from the wall, what used to be mass deportation (again with no details) is now essentially the equivalent of “tagging up.”

He has no idea about the logistics of deporting 11 million to 30 million people. Thanks to our laws and liberal courts, each person will be entitled to legal representation at taxpayer expense and a drawn-out process. It would be a legal and social nightmare under the best of conditions.

And I say this as someone who supports the notion – although I would do it by making illegal aliens unemployable and blocking their access to social services.

So he’s tried to alleviate this by changing his tune a bit. Well, adding to it, actually.

He’s now stressing the “Then we can bring them back legally” caveat. All illegals would have to do would be to go home, fill out some paperwork, then return – quickly for “the good ones.” But they’ve all broken the law. They’ve all cut in line ahead of people trying to come here legally.

Why should any of them get to come back “quickly?” How does that help Americans? We have plenty of low-skilled workers already – our public schools churn them out at an alarming pace. They’re already competing for jobs with legal and illegal aliens. Why allow them to get back in quickly and basically reset the current situation?

This is just one example of Trump’s vagaries. He’s for tariffs, then he’s against them. He wants to raise taxes, then he wants to cut them. He has a plan for dealing with ISIS but won’t say what it is because he doesn’t want to tip them off. The only thing on which Trump is specific is the polls he cites constantly.

This is enough for some people. Democrats have done such horrible things to the country, and Republicans too often have been either their willing accomplices or dupes that someone who rocks boats for the sake of rocking boats seems like a good option. But although raising your voice is important, screaming just to make noise is counterproductive.

Trump deserves credit for changing the discussion on immigration. Without him, we’d simply be talking about varying degrees of amnesty. But as his plan evolves, like so much of what he says that contradicts other things he’s said, the difference between his ideas and amnesty seem to involve only a plane ticket in the middle.

I’m happy to see more conservatives, especially on an institutional level, questioning Trump’s plans and credibility. Whoever wins the nomination must go through serious scrutiny. Unfortunately Trump won’t take this opportunity to address specific charges and, perhaps, alleviate concerns and coalesce conservative support around his candidacy. He’ll simply continue to do what he’s already done: launch non-sequitur attacks against critics, no matter how valid their grievance.

Too much is riding on whoever follows Barack Obama’s presidency to fall for “hope and change” simply because the candidate has an R behind his name as opposed to a D. Trump may end up being the nominee, but without seriously and coherently addressing conservatives’ concerns with his campaign and pronouncements, he won’t be president.

As a successful businessman, you’d think he’d recognize this problem and address it now. The questions are will his ego allow him to and whether the questions indeed can be answered.