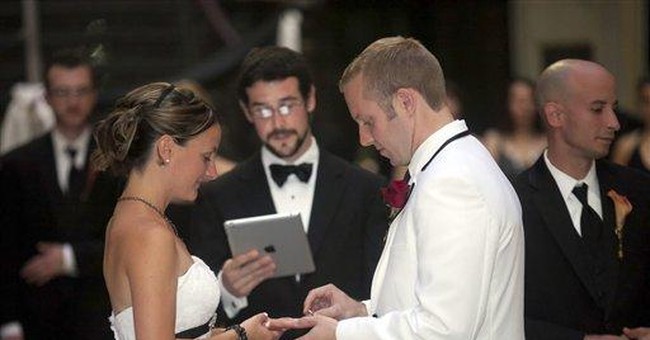 By the time you read this, I will be dead… Well, not dead-dead, but the life I’ve led to this point will be over.

Yesterday at 1 p.m., I got married. Unless, that is, someone objected or a young Dustin Hoffman showed up and swept my then-fiancé away. Yes, I watch too many movies. But yes, I always kind of wanted to be at a wedding where someone objected or ran out of the church. Just never hoped it’d be mine.

So, barring something worthy of Hollywood, the life I’ve known since birth is now over. If you’ve been married you know the transition I’m talking about. (And every married person I know has given me some variation of “Your freedom is about to end” in the past two weeks.) If you haven’t, heed my advice from a few weeks ago and elope.

First off, women go through more hell than we men can imagine when it comes to a wedding. We’ve never thought of it; they have. They may not have obsessed about it like in some horrible movie, but they’ve got some long-standing ideas in their heads.

The best you can hope for as a man is she’s had a sister close in age or a best friend get married, so they can see all the hoops you have to jump through to reach the finish line and they want no part of it. Although that does happen, it’s as unlikely as an unscheduled eclipse.

Things you’ve never imagined could be an issue will be an issue. What do I mean? Well…

I almost spray painted my front lawn this week.

Not a sentence I ever thought I’d think, let alone write. But when you put fertilizer on your grass hoping to give it some pep, and it kills it instead, well, desperate times.

I killed my lawn the week before our families showed up, which is a problem. It wasn’t going to win any awards anyway, but it was green-ish. I picked up a sack of fertilizer to give it a kick, and because it was on clearance at Target. Kevorkianed it over night.

It wasn’t a defective product. I didn’t read the instructions because a.) I’m an idiot; b.) I’m a guy – but I repeat myself; and c.) It’s fertilizer! It’s supposed to help the lawn, not kill it. The picture on the bag was of green grass – lather, rinse, repeat. Simple.

Yeah, not so much.

I threw the bag away, so I’ll never know what I did wrong. Honestly, I didn’t care, I just needed green in front of the house.

I took to the Internet to find the fastest growing grass seed available, and how fast it could grow. Turns out it is four days.

I hopped in the car, zipped to Home Depot and bought a bunch of it. Raked (because I read the instructions this time), spread it, watered and crossed my fingers. Even threw some topsoil down because the bag said that increased my chances.

My fiancé went to Amazon and bought something called Enviro-Color. I had jokingly said I could always paint the dead grass green if nothing grew; little did I know such a product exists. She didn’t doubt my ability to grow a new lawn in a week; she simply was being pragmatic.

It won’t last the winter, which is normal for these seeds and the penance you pay for a quick lawn, but it’s a green lawn right now. Needless to say, I didn’t end up painting dirt, but if I needed it the option was there.

That, to my mind, is what marriage is. It’s not a dependency – an inability to function without the help of the other – but complementing one another. Left to my own devices, I would’ve tried the seed, then been out there with cans of Krylon the night before. She let me do what I wanted to do but was ready if that didn’t work. Not with judgment; with a plan B.

Perhaps you’ve never given so much thought to dead grass, but the night before your wedding, when you have a deadline looming (in more ways than one), weird things creep between the ears.

That my wife knows that, and puts up with it, puts a smile on my face. By the way, since I’m writing this Thursday night (my second-to-last night of singlehood), that’s the first time I’ve ever used “my wife.” Unusual, to say the least, but I like it.

I woke up this morning with a wife; my old life is over. It was fun, a lot of fun (and a bit of a miracle I have any liver or brain cells left), but it’s done. And I and my naturally green grass are perfectly happy about that.