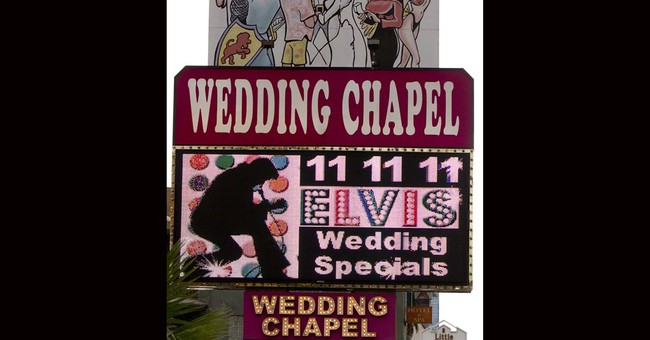 There is no human being who, looking back on their life, hasn’t had the thought, “If I only knew then what I know now…” It’s human nature. No matter how long ago “then” was, hindsight is always 20/20.

This isn’t about Hillary Clinton and her secret, unsecured email server. She didn’t make a bad choice and end up skirting the law; she made a conscious decision and is now getting caught. That’s karma, not virgin ignorance.

No, I’m not writing about Hillary’s ever-changing email excuses (I already analyzed that here on Friday) or anything else political. This is personal – perhaps the highest level of personal: my wedding.

In less than a month, Labor Day weekend, your daughters, sisters, girlfriends, etc., will be safe because I will be married. That day cannot come soon enough!

You’ve (sort of) met my fiancé Heather, or at least read of her and her story of how, while in college, she fought for and won the mandatory display of the American flag in every classroom, kindergarten through college, in Florida and wrote about it in this column back in March.

That I have met someone who not only could put up with me and my smart-aleck sense of humor, but agree to spend the rest of their life with me should stand as a testament to the fact that there is someone out there for everyone. Forget Obama; I’m the bringer of hope.

So what I say next has to be seen through that prism. It’s not a complaint, per se; it’s a warning. If you are already married, this may serve as a reminder of some memories you’d rather forget. If you aren’t yet married, consider this the warning no one thought to give me.

I am no fan of Las Vegas, but it’s only a couple of hours away from wherever you are right now. Fly there, invite family and some friends, but make it clear they are under no obligation to come, and elope.

My parents got married very young more than 50 years ago, and they’re still in love to the point that they gross out me and my siblings. But they’ve never had any money. Neither graduated high school. My dad drove a forklift for GM and my mother is disabled – so their story of the $150 wedding and reception only serves to remind me of how I was born at the wrong time.

I’m the youngest of five – born late, after they thought they couldn’t have any more kids. Their best “mistake,” I half-jokingly tell them. But none of my siblings warned me about how much things have changed when they got married.

Since no one warned me, let me warn you – the act of getting married is a long, expensive process.

As a man, I never spent one second thinking about what kind of wedding I wanted. Never. I always knew I would get married, but how that would come about kind of seemed like something that would be pretty easy – pick a day, get the church, dress up, show up, boom. Fool.

I am Catholic; she was Baptist. She converted (of her own accord, not at my prodding), so a Catholic wedding it will be. This differs by church, but each (I’m told) has some sort of required marriage prep course. Ours was four days – Thursday night, Friday night, all day Saturday, all day Sunday. It was a lot like taking a prerequisite course for a class you’ve already had, but the box was checked.

Although the class was not cheap, it was at least the only option. Shopping around for a venue for the reception, the food, the booze, the cake, flowers, etc., etc., will make you old fast. And don’t get me started on the guest list.

Who knew so much went into a simple party? Well, OK, not simple, but still a party.

You will be ruled by your budget. Everyone would love to have pictures in a glorious ballroom, and orchestra nestled in the corner while elegantly dressed models danced and sipped champagne. Unless your last name is Trump, that’s why God created PhotoShop.

Our ballroom is a hall attached to the Church; our orchestra is an iPod with a Bluetooth speaker, and our dancing models are on strike. I’m typing this next to a couple of cases of moderately prices wine. Beer will be purchased closer to the day.

The food is set. The cake, which I have to assume turns into gold after digestion based on the price of what amounts to sugar, eggs, flour and more sugar, is ordered. The only detail remaining (and I type that with all the hope of Ralphie in “A Christmas Story” hunting for his Red Rider BB Gun under the tree) is the flowers.

Who, in a room full of people with cameras on their phones, will take the pictures? Someone … that’s all I know. And who will record it? Someone. (Has anyone ever watched their wedding video? Ever? But it must be recorded, apparently.)

They want to watch you get married; it’s sort of a finish line for them raising you. They cry, either because they’re happy or because it lessens the possibility you’ll move back in with them, or maybe both. And they can, at least momentarily, rest what I have to assume is the worry of all parents – that they did all right in raising the human being they created.

But they can cry, feel proud, be happy and whatever else in Vegas just as easily. And although you may still leave Vegas in the poorhouse, at least you’ll know exactly where your money went.

As a bit of a postscript, this isn’t in any way a slam against marriage, just whoever created thick-stock paper for invitations/thank you notes and the concept of “engagement photos.” Marriage is a wonderful institution (or so I’m told), the industry that has cropped up around it is the root of all non-progressive evil.

That being said, I’m a lucky man. If you’ve read this and my other columns over the last few years and find yourself wondering who would marry this guy?!?! … well, you can see for yourself here. If you’re so inclined, feel free to toss a little something into the general fund. Maybe you can help save me from my idea of running into community gardens the night before to avoid having to give a guy my left arm for a few flowers.