In The Government’s Crosshairs 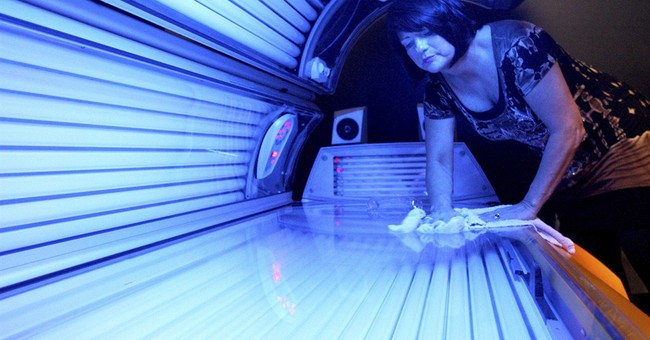 I don’t get tanning, either outside or inside. I’ve never been a sun-worshipper and can’t stand hot summers. I prefer cold – you can always put more layers of clothes on, you can only take so much off. But just because I don’t engage in something doesn’t mean I don’t see a problem when it’s targeted by protestors, special interest groups, and especially government; and the tanning industry is the latest to have a government-painted bullseye on its back.

This issue came to my attention when my friend and former co-worker Ryan Ellis wrote about it in the Washington Times a couple of weeks ago. Ryan knows the tax code, he works at Americans for Tax Reform (where I used to work), so he’s not a fan of increasing taxes on anything. That he’s on the side of the Jersey Shore’s Snooki is just a coincidence, and something I include here to tease him.

But Ryan Ellis and Snooki are correct (you have no idea how much I enjoyed writing that sentence): the more you tax something, the less of it you get. And the tax imposed on tanning salons by Obamacare has severely damaged that industry. As Ellis put it, “In the past four years, an estimated 8,000 tanning salons have closed their doors, according to the American Suntanning Association.” You may not think that matters, but he continues, “This has cost 64,000 employees and owners of these tanning salons their jobs.”

That’s a lot of jobs lost in an economy in desperate need of jobs.

The tanning tax was part of Obamacare because, quite frankly, Democrats needed to raise all kinds of taxes on all manner of things to give the appearance that the law wouldn’t add to the national debt. At least on paper. Reality, as is often the case, is a different story.

Ellis writes, “The IRS reports that the tanning tax brought in a paltry $15 million in 2010, $86 million in 2011 and $91 million in 2012.” I think we could all make the sacrifices necessary to live off of that kind of money. It would be tough, but we could do it. But we aren’t government, and no amount is ever enough for government. He continues, “While those numbers are apparently large enough to decimate an entire industry, they are laughable compared to the $2.7 billion the tax was supposed to generate in its first decade of implementation.”

That’s how government works – pick an industry to decimate, decimate it, and still not get what you claimed you’d get. But, and this is key for politicians, never stop.

As if 64,000 jobs lost weren’t enough, Democrats aren’t done targeting the tanning industry. New York Congresswoman Carolyn Maloney now wants the Food and Drug Administration to usurp the authority of parents and ban people under 18 from using tanning beds. New York already does, but she’s not content with other states making their own decisions; she wants Big Brother to make that decision for everyone.

She, like most people, associates tanning with skin cancer. Sure, if you regularly bake yourself to a crisp in a tanning bed, you can find yourself being more susceptible to melanoma. But that’s also true for people who do the same thing on the beach. But what she doesn’t tell you, or doesn’t know (or even doesn’t care about) is that vitamin D, of which we get plenty from the sun and UV light, is good for you. So good, in fact, that not having enough has been linked to increased risk of cancer and heart disease.

That’s not going to stop Maloney because, well, why would it? Remember that next time someone tells you Democrats are the pro-science party. They cite it endlessly when it suits their cause and ignore it when it doesn’t. They’re pro-science on issues outside of “global warming” like they’re pro-choice outside of the abortion clinic.

Similarly, next time you hear the “war on women” mantra from a leftist, remember that of those 8,000 businesses forced to close by Democrats’ Obamacare tanning tax, they came in an industry where women own 70 percent of companies. How Republicans managed this sleight of hand and forced Democrats to impose this anti-woman agenda will be a mystery for the ages.

Should you go tanning, either at a salon or on the beach? If you want to, sure. Getting burned is never healthy, but we’re all smart enough to know that, plus we need the vitamins our skin is designed to absorb to be healthy. If you want to live under an umbrella, slather yourself with SPF 10,000, and avoid any direct light, that’s fine too. It’s your life, you should make the decisions in it. That is, of course, exactly what you can’t do when the government paints a target on your back. Today it’s tanning, what it will be tomorrow is anyone’s guess.