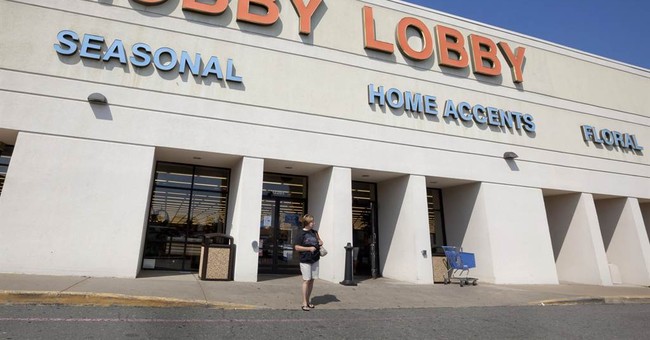 The world is on the verge of coming to an end. No, not because of Russia’s aggression or Jihadists getting a nuclear weapon, but because the Supreme Court could rule that owners of companies cannot be ordered to violate their deeply held religious beliefs. Yes, society has sunk this low.

The Supreme Court is not expected to rule until June in the case of Sebelius vs. Hobby Lobby, so you’ve got some time to stock up on canned goods and toilet paper before the reckoning. But, if the Constitution means anything, that reckoning will come to pass.

At stake is whether individuals lose their religious liberty simply because they start a business. The owners of the craft store chain Hobby Lobby have a deeply held religious belief that certain forms of contraception cause an abortion, something they, as Christians, vehemently oppose. As such, they object to paying for health insurance that provides those forms of contraception on the grounds of their religious freedom. You know, that “Congress shall make no law” part of the First Amendment.

The Obama administration has a different idea on this. It acts as if the First Amendment reads, “Congress shall make no law…unless the president acquires a magic pen and a phone that allows him to bypass Congress…”

The central question of the Hobby Lobby case is whether people lose their religious liberty once they open a business. Hobby Lobby is a privately owned company, not a publicly traded one. As such, it is an extension of its owners – not millions of stockholders with diverse views. It is owned by one family, and that family is unified in its beliefs.

But deeply held religious beliefs are an impediment to the progressive agenda; therefore they must be trampled. There is no God but government.

Sandra Fluke, the patron saint of mooching in the progressive church of victimization, took to the pages of the Washington Post to expose how little value and learning there is in a Georgetown law degree.

First, she’s listed as a “social justice attorney who testified before Congress in 2012.” But Fluke never testified before Congress. There was a hearing in the House to talk about the religious liberty aspect of the contraception mandate, and Democrats were afforded one witness on the topic. They submitted the name of an expert on religious liberty but attempted on the day of the hearing to swap out that expert, who was on topic, for Fluke. Republicans rejected the change, as is their right, because she was a student, not an expert.

The Democrats then boycotted the hearing, went to an empty meeting room in the basement, threw a blanket over a folding table and held a staged photo-op disguised as a hearing. The media played along and reported it as if it were a hearing, but it was not.

Did you see any Republicans ask Fluke any questions? There’s a reason for that. It wasn’t a hearing. That the media considers it one shows just how far in the tank most reporters are for Democrats.

Undeterred by fact, Fluke writes that if a religious exemption were granted for the contraception mandate and – GASP – people were expected to pay for their own birth control, “We are at risk of giving any person or group with a religious qualm the legal ability to refuse to comply with numerous critical employment laws, not just those related to health insurance. Depending on the exact ruling, any for-profit corporation could cut off its employees’ insurance coverage for blood transfusions, vaccinations or HIV treatment…”

Recognize that argument? It’s the “slippery slope” argument progressives routinely attack conservatives for making on gay marriage. If a man can marry another man, what’s the logic for denying three men from being able to marry? Or one man and three women?

Those questions are dismissed by progressives as unrealistic, mostly because they can’t answer them. But when they do it usually comes down to “No one is calling for that to happen.” Well, no one is saying companies should be able to deny coverage for medically necessary and proven procedures such as transfusions or HIV treatment – chosen specifically to try to scare the hell out of gay people. But progressives aren’t know for letting facts get in the way of pushing their agenda. Maybe Hobby Lobby should’ve just said, “If you like your contraception, you can keep your contraception. Period.”

In the progressive world you aren’t an “employee,” you’re a “worker.” Moreover you’re a slave owned by a company, unable to leave and find a new job if that company does things that go against what you want or believe yourself. Or worse, you’re a serf who doesn’t have the wherewithal to obtain your own contraception if your employer or government doesn’t provide it for you.

For much of their base, they’re probably right. But for self-respecting adults with at least two brain cells, this push by the left is another step in the attempted infantilization of America. Putting aside the fact that if you can’t afford the nominal cost of contraception you probably should find a better use for your time than sex … if your sex life is dependent on your employer, or, worse, government providing you with contraception … well, we’re all screwed.

Progressives’ claims of authority to impose their will hinges upon their desire to make religion something people do on Sundays, like shopping for shoes, not an all-encompassing way in which people live their lives. It’s a crutch, a prop, not real faith. After all, these are people who cheered and pretended to believe in Bill Clinton’s “faith resurgence” and church attendance after he was caught lying about Monica Lewinsky, so it’s been a prop for them for a long time.

For millions of others, on the other hand, religion is not a photo-op in times of low poll numbers, it’s a deeply help conviction that informs their every move. For progressives, that space should be filled only by government. Lack of belief in the individual and total trust in government is, if you will, their religion. And on this mandate, as with pretty much all of their intrusive, power-grabbing agenda, progressives are every bit as devout as any member of al Qaeda.