What Putin Got Right 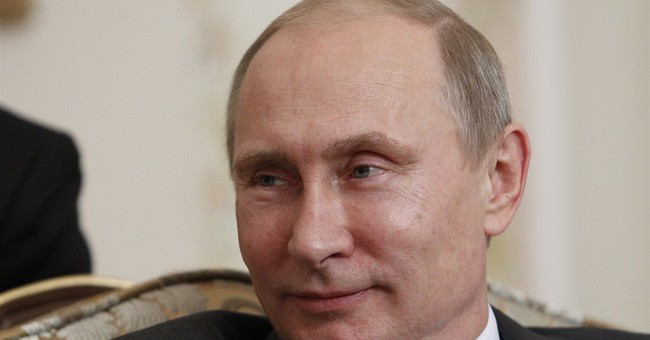 It’s a sad day for the United States when the president of any other country, but especially Russia, can outmaneuver our president and successfully claim the moral high ground on anything. But that’s exactly what happened thanks to President Obama's feckless “foreign policy by gaffe” – if you can even it call it policy – toward Syria in recent weeks.

But in the course of seizing that high ground, Vladimir Putin got a couple of things wrong.

He wrote a column in The New York Times Wednesday that concluded, “My working and personal relationship with President Obama is marked by growing trust. I appreciate this. I carefully studied his address to the nation on Tuesday. And I would rather disagree with a case he made on American exceptionalism, stating that the United States’ policy is “what makes America different. It’s what makes us exceptional.” It is extremely dangerous to encourage people to see themselves as exceptional, whatever the motivation. There are big countries and small countries, rich and poor, those with long democratic traditions and those still finding their way to democracy. Their policies differ, too. We are all different, but when we ask for the Lord’s blessings, we must not forget that God created us equal.”

Contrary to Putin's prose, American exceptionalism is not based on “policies” but the principles upon which our nation was founded. For what it’s worth, President Obama misunderstands this too, but the thought of a Lieutenant Colonel in the KGB invoking God and citing the Declaration of Independence is beyond ironic. Yet aside from what Putin gets wrong, he gets one thing right, if only by accident.

When Putin wrote, “It is extremely dangerous to encourage people to see themselves as exceptional, whatever the motivation,” he was, dare I say it, right.

Our nation is exceptional, but you, me and every other American – we’re not exceptional simply because we are American, even though we, more than any other people on Earth, have the opportunity to become exceptional through our actions.

We are raising a generation of people to believe they are special, that like every child in Lake Wobegon they’re all “above average.” Of course that’s not only impossible, it’s dangerous.

This “participation ribbon generation” being raised by helicopter parents who have coddled their children to the point of removing scores, statistics and standings from sports, will, if reality doesn’t set in, breed into the future an attitude of entitlement more damaging than any chemical weapon. In short, it will bring about the end of American exceptionalism from within.

A story in Tuesday’s Wall Street Journal makes clear the first members of participation ribbon generation are entering the workforce, and it isn’t pretty. An ever-growing percentage of the few recent college graduates who can find work in this economy are exhibiting a disturbing trend – bringing their parents on job interviews and involving them in their adult working life.

President Reagan famously said “Freedom is never more than one generation away from extinction. We didn't pass it to our children in the bloodstream. It must be fought for, protected and handed on for them to do the same, or one day we will spend our sunset years telling our children and our children's children what it was once like in the United States where men were free.”

Today, self-esteem has replaced achievement, and children are becoming more and more insulated from the realities of life, such as failure, disappointment, losing, etc. Conversely, they’re also being insulated from success, accomplishment, winning and the rest. This trend will soon grow to the point children could grow up never having won or lost, failed or succeeded, and never felt the highs and lows or learned the lessons of either.

A few weeks ago the CBC Radio ran a parody piece about a soccer league that was removing the ball because "We want our children to grow up learning that sport is not about competition, rather it's about using your imagination. If you imagine you're good at soccer, then, you are." It was originally not seen as parody because, well, society has gotten to the point that it’s totally believable. How long until we have an “activity” (not a sport because that implies competition) called “Imagination Ball” where the rules are what you make them and everybody wins? It can’t be long…

We’re teaching children they are exceptional because they are, which is wrong. What we should teach them is that, as Americans, they have the best opportunity to do something exceptional – at least for now. But it’s going to take a lot of hard work, wins and losses., successes and failures and, above all, dedication.

Vladimir Putin was correct in one respect, “It is extremely dangerous to encourage people to see themselves as exceptional” simply for being. Steve Jobs wasn’t born exceptional, but he certainly did exceptional things while he was alive. The same is true for Barack Obama, and everyone else you’ve ever heard of. We’re losing that which drives us, the desire to be exceptional and do exceptional things, and replacing it with entitlement through insulation from reality. Without strife there is no accomplishment, without failure how do you measure success? If we don’t stop this trend of coddling and enveloping kids in emotional bubble wrap, American exceptionalism may only be one generation away from extinction.