The United States of Racism 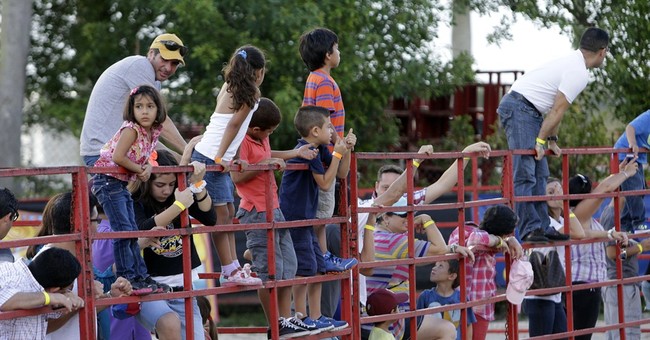 To anyone who has been following the really big stories in the news – and by big, I don’t mean the silliness surrounding IRS, EPA, NSA, ObamaCare or Benghazi – it has become obvious. This is a racist country. Indeed, it is a horribly racist place.

It’s not like it used to be, with Klan rallies, Jim Crow and governors standing in schoolhouse doors. It’s much more subtle and insidious now, and it permeates every aspect of American life.

I’ve avoided saying it for a while now, but I can’t be silent anymore.

I’m talking, of course, about the really big story of the last week – the scourge of racism exposed by a simple rodeo clown at the Missouri State Fair. The aftermath of what happened there should disturb every American interested in equality.

The racist act was not some unnamed guy wearing a Barack Obama mask and lampooning the president. Nor was it Tuffy Gessling, the now “banned for life” rodeo performer who was on the microphone. No, the racist act isn’t a single act; it’s a constant series of acts committed by progressives, Democrats and their allies. It’s the insistence President Obama not be held to the same standards, not be treated the same way as other presidents and other politicians simply because of race.

It’s not breaking news the president is black. Most people, especially those of us born after the babyboomers, couldn’t care less. It was indeed a much bigger deal 40 years ago, but we are not our grandparents’ generation. The world has changed. Peoples have stopped caring about race. We’ve stopped caring about a lot of things the people in charge still obsess over, but none more than race.

This burgeoning revolution has left some people adrift in a world that soon no longer will exist. Their mind still resides in a place with separate water fountains, George Wallace ruling Alabama and the KKK marching in the streets. These people can’t let go. It is the basis of their power, their politics, their wallets. It’s sickening, and it’s un-American.

Merriam-Webster defines racism as “a belief that race is the primary determinant of human traits and capacities and that racial differences produce an inherent superiority of a particular race.” That can be boiled down to treating people differently, having different expectations, different standards for someone because of race. And this is how progressives treat President Obama.

There was a time when criticism, satire, downright mockery and any number of things considered “attacks” were not only accepted but cheered. From the moment of our founding, the freedom to criticize political leaders was one of the things that set us apart from the rest of the world. Now, thanks to the progressive movement, criticism, even mockery, of the president of the United States is called racism. Essentially, progressives demand a whole new standard for criticizing this president – all because of his race.

Disagreeing with Barack Obama on policy is racist. Disapproval of his handling of the economy is a Klan rally. Speaking against his feckless foreign policy is the back of the bus. To withhold consent to his every whim is to burn a cross. The substance of the critiques doesn’t matter and rarely, if ever, is even addressed.

Instead, we get analysis about the deeply racist motives that drive the opposition to the president. Why? Because the majority of these race-relics are in the media.

But these self-appointed gatekeepers, these racists holding a black man to a different standard than any of the white men who’ve held the office, are not alone. They have a powerful ally. The chief enabler of this double standard is the Enabler-In-Chief, the beneficiary of it all – President Obama.

That President Obama is held to a lower standard for honesty, effectiveness, expectation and accomplishment benefits him immeasurably. He knows this and embraces it. Were he not interested in this perversion of what is right, he could have had his official spokesman release a statement this week telling his minions, those who created this lower standard, to lighten up, that he can take a joke, and to leave the clown alone. But he didn’t.

An American man has been under a sustained attack for a week now for simply treating this president like any other president. And the only words we’ve heard from the president’s spokesman is that this was not one of Missouri’s “finer moments.” Gessling has lost his job, been accused of committing a “hate crime,” seen his life basically ruined because the president of the United States couldn’t be bothered to tell a staffer to pass along that he said “knock it off.”

That’s because he doesn’t want it “knocked off.” Maintaining the “Obama standard” for critique of a president is far more useful to him than a clown in Missouri, a cop in Cambridge, Mass., an Hispanic neighborhood watch volunteer in Florida or anyone else who may stand in his way.

Progressives in the media, in non-profits and elected office are happy to help because they benefit too. They get another day off the hook for their sins and those of their progressive forefathers who donned Klan hoods, mandated “whites only” signs and blocked school doorways. Another day of people not realizing those overt racist impediments to liberty have been replaced by the covert racism of the “helping” bureaucracy.

The methods have changed, but not the goal. That the president is black doesn’t matter; the agenda matters – and the power that goes with it.

The progressive agenda is advanced, its power obtained, by dividing people. That’s why so many have embraced the lower standard for this current president.

Luckily, fewer and fewer people are falling for this “equal-but-separate” deception. With each new day, there is more indifference to the politics of race. The president is sinking in the polls not because he’s black but because America does not accept his radical progressive agenda. Calling opponents racist will fall on deaf ears increasingly as time goes by because those ears aren’t deaf, they just know they’re being lied to.

Ruining the life of a rodeo clown won’t be the Berlin Wall moment for the politics of division. But that moment is coming. We see it in the polls, in the continued ratings drops for MSNBC. Before long, we will see it at the voting polls.

And it can’t come a day too soon.