Dennis Prager
|
Posted: Jan 09, 2018 12:01 AM
Share   Tweet
The opinions expressed by columnists are their own and do not necessarily represent the views of Townhall.com. 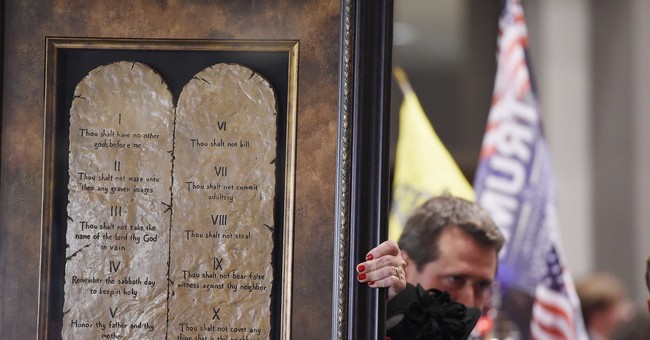 I won't make any assumptions about how many readers noticed I took a three-month break from column writing.

Nevertheless, I want to explain why.

I needed the time to finish the first volume of the biggest project of my life as a writer, a commentary on the first five books of the Bible, or what are called the Torah in Hebrew.

I have believed all my life that the primary crisis in America and the West is the abandonment of Judeo-Christian values, or, one might say, the dismissal of the Bible. Virtually everyone on the left thinks America would be better off as a secular nation. And virtually all conservative intellectuals don't think it matters. How many intellectuals study the Bible and teach it to their children?

And yet, from the time long before the United States became a country until well into the 1950s, the Bible was not only the most widely read book in America; it was the primary vehicle by which each generation passed on morality and wisdom to the next generation.

Since that time, we have gone from a Bible-based society to a Bible-ignorant one; from the Bible being the Greatest Book to the Bible being an irrelevant book. Ask your college-age child, niece, nephew or grandchild to identify Cain and Abel, the Tower of Babel or the ten plagues. Get ready for some blank stares. I recently asked some college graduates (none of whom were Jewish) to name the four Gospels. None could.

But what we have today is worse than ignorance of the Bible. It is contempt for it. Just about anyone who quotes the Bible, let alone says it is the source of his or her values, is essentially regarded as a simpleton who is anti-science, anti-intellectual and sexist.

Our society, one of whose mottos is "In God We Trust," is becoming as godless as Western Europe -- and, consequently, as morally confused and unwise as Europe. Just as most professors regard most Bible believers as foolish, I have more or less the same view of most college professors in the liberal arts. When I hear that someone has a Ph.D. in sociology, anthropology, political science or English, let alone women's studies or gender studies, I assume that he or she is morally confused and bereft of wisdom. Some are not, of course. But they constitute a small minority.

Whenever teenagers call my radio show or I meet one in person, I can usually identify -- almost immediately -- the ones who are receiving a religion-based education. They are far more likely to act mature and have more wisdom than their Bible-free peers.

One of our two greatest presidents, Abraham Lincoln, rarely attended church, but he read the Bible daily. As he said while president, "In regard to this Great Book, I have but to say, I believe the Bible is the best gift God has given to man."

Were he able to observe America today, Lincoln would be shocked by many things. But none would shock him as much as the widespread ignorance of and contempt for the Bible.

I have taught the Torah, from the Hebrew original, for 40 years. Of the many things I have been blessed to be able to do -- from hosting a national radio show to conducting orchestras -- teaching Torah is my favorite.

When asked how it has affected my life, I often note that in my early 20s, when I was working through issues I had with my parents, there was nevertheless not a week during which I did not call them. And there was one reason for this: I believe that God commanded us to "Honor your father and your mother."

In America, there is an epidemic of children who no longer talk one or both of their parents. In a few cases, this is warranted. But in most cases, adult children are inflicting terrible, unfair pain upon their parent. This is one of a myriad of examples where believing in a God-based text is transformative. Secular callers tell me that they hardly need the Ten Commandments to desist from murdering anyone. That may well be true. But apparently, a lot of people could use the Ten Commandments to avoid inflicting terrible pain on (admittedly, flawed) parents.

The title of my work is "The Rational Bible" because my vehicle to God and the Bible is reason. If you have ever wondered why all of America's founders revered the Bible, let alone why anyone today might do so, this book should provide an explanation. My ultimate aim is to help make the Bible America's book once again.