Do Jews, Christians and Muslims Believe in the Same God?

Dennis Prager
|
Posted: Apr 19, 2016 12:01 AM
Share   Tweet
The opinions expressed by columnists are their own and do not necessarily represent the views of Townhall.com. 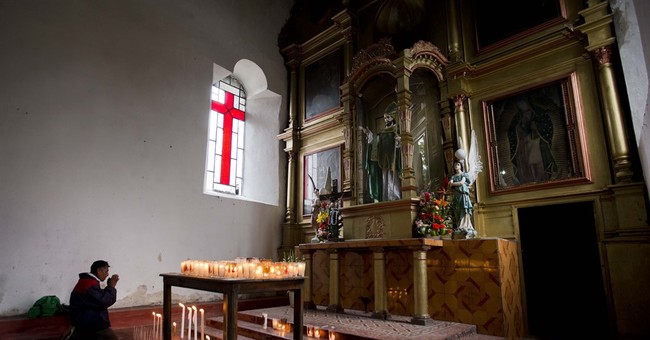 But this statement is actually meaningless.

To cite one example, the God in whose name some Muslim extremists cut innocent peoples' throats and violate women cannot be the same God as the God of those who believe God condemns such actions.

Who then argues that all those who say they believe in God believe in the same God?

So, how are we to know whether any two people who say they believe in God in fact do?

I will answer as a believing Jew: How do I know if another person believes in the same God that I do? I ask the following three questions:

--Do you believe in the God of Israel?

Those who cannot answer this question in the affirmative do not believe in the same God that believing Jews and the majority of believing Christians do. As for Muslims, they should have no problem answering in the affirmative, but in our time many wouldn't.

The God of Israel is, among other things, the God introduced to the world by the Jews and their Bible: the God who created the world, revealed himself to the Jews, and made his moral will known through the Ten Commandments and the Hebrew prophets.

--Does the God you believe in judge the moral behavior of every human being?

There are many people today who say that they believe in a God who does not judge peoples' actions. As such, they do not believe in the same God as traditional Jews and Christians. In fact, a God that is indifferent to the moral behavior of human beings is so different from the God introduced by the Jews that these believers might as well use a word other than "God."

Now, this does not mean that such people cannot be fine, upstanding individuals (just as not everyone who believes in a morally judging God is a fine, upstanding person). But in general, these people are less likely to be moral for the obvious reason that most human beings act better when they believe their actions will be judged either by God and/or by man.

At the same time, one need not be a Jew, Christian or Muslim in order to believe in a God who judges morality. Benjamin Franklin was one such individual: He did not affirm the Christian creed that Jesus was God, but he did believe in the moral teachings and judgments of God introduced by the Bible.

For the record, Jews never believed -- and the Jewish Bible never suggested -- that one must believe in Judaism or be Jewish in order to be favorably judged by God.

--Do you believe in the God who gave the Ten Commandments?

This question needs to be asked. After all, if God never revealed his moral will, how would we know what behaviors he demands from us and what he judges?

And what about people who say "yes" to these questions but have additional theological beliefs? Do they believe in the same God as those who also answer "yes" but have no additional beliefs?

Whether or not one uses these three criteria, we should all at least acknowledge that saying one believes in God tells us nothing about the God one believes in. And regarding faith, that is what matters.