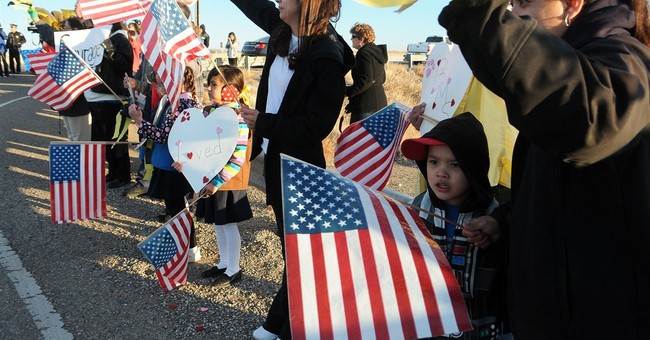 Two weeks ago, a group of students at the University of California at Irvine removed a U.S. flag from a common area of the student government suite.

Shortly afterwards, six undergraduate members of the Associated Students Council of UCI passed a resolution banning the display of the flags of any nation in the office lobby. The resolution was authored by student Matthew Guevara of the School of Social Ecology.

Among the reasons the legislative council objected to the American flag were:

--"The American flag has been flown in instances of colonialism and imperialism."

--"A common ideological understanding of the United States includes American exceptionalism and superiority."

--"Designing a culturally inclusive space is taken seriously by ASUCI."

--"The removal of barriers is the best option at promoting an inclusive space."

--"It is a psychological effect for individuals to identify negative aspects of a space rather than positive ones."

--"Freedom of speech, in a space that aims to be as inclusive as possible can be interpreted as hate speech."

But the issue did not end there.

The hostility that the original legislative council vote engendered -- including, reportedly, death threats -- was used by over a thousand students and dozens of professors as a reason to sign a petition supporting the original ban on the flag.

In the words of the petition:

"The resolution recognized that nationalism, including U.S. nationalism, often contributes to racism and xenophobia, and that the paraphernalia of nationalism is in fact often used to intimidate. This is a more or less uncontroversial scholarly point. ...

"We admire the courage of the resolution's supporters amid this environment of political immaturity and threat, and support them unequivocally."

These are the facts. Now to what I believe is the most important question regarding the resolution to ban the flag and the petition on behalf of the resolution: Why were they supported?

1. Outside of the natural sciences, math, and a few other departments, our universities are essentially seminaries -- teaching what has been the most dynamic religion of the Western world over the past hundred years, leftism. Every -- frequently incoherent -- idea expressed by the resolution and the petition represents years of left-wing indoctrination. Respect for the American flag comes naturally; reasons to hold it in contempt have to be learned.

It is not surprising that the author of the resolution is a student at UC Irvine's School of Social Ecology. Visit its website and you will see leftism in one of its purest forms.

2. The students and the professors see themselves as citizens of the world. Leftism rejects nationalism, and the most nationalistic of the industrialized Western democracies is America. The left regards nationalism -- as symbolized by hanging or waving the American flag -- as primitive and ultimately fascistic.

This ease, however, presents them with another problem -- a lack of meaning in life. For nearly all people there has never been a problem with finding meaning. Even putting aside religion -- humanity's greatest supplier of meaning -- life's difficulties have always given people meaning: How will I feed myself and my family? How will I provide myself and my family with a home?

But these problems exist for almost no American college student and they do not exist for any American professor. And since so few professors, and increasingly few students, derive meaning from America's traditional Judeo-Christian religions, meaning must be sought and found elsewhere.

That America is in fact the most open, opportunity-giving and tolerant country in world history is irrelevant to these people. To acknowledge this would be to deprive themselves of the greatest human need after food -- meaning and purpose.

These are the reasons they want to ban the American flag. That hundreds of thousands of Americans died for what this flag represents -- the American trinity of liberty, In God We Trust and E Pluribus Unum -- means nothing to these students and professors. Thanks to leftism, when they see the American flag they see imperialism and bigotry.