Pope Francis, the Climate and Leftism 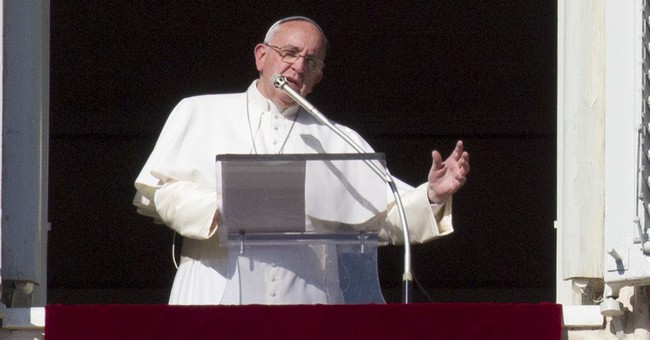 Since his ascendancy to the papacy in March 2013, Pope Francis has issued one.

But Pope Francis is about to issue an encyclical to the world's 5,000 bishops and 400,000 priests that tells us a great deal about him, about Latin America and, most of all, about the influence of what has been the most dynamic religion in the world for the last hundred years.

Hint: It isn't Christianity or Islam.

This year, the pope will use an immense amount papal moral influence to address global warming, or as it is now called, in light of the small amount of warming actually taking place, climate change. In a few weeks, he will visit the Philippine city of Tacloban, which was devastated by the super typhoon Haiyan in 2012. Then he will present his encyclical, and in September he will address the United Nations General Assembly on the subject. This will all be done in order to influence the December 2015 international Climate Change Conference in Paris.

The world's left is ecstatic with this pope. As the Guardian reported:

"In recent months, the pope has argued for a radical new financial and economic system to avoid human inequality and ecological devastation. In October he told a meeting ... 'An economic system centered on the god of money needs to plunder nature to sustain the frenetic rhythm of consumption that is inherent to it.

"'The system continues unchanged, since what dominates are the dynamics of an economy and a finance that are lacking in ethics. It is no longer man who commands, but money. Cash commands.

"'The monopolising of lands, deforestation, the appropriation of water, inadequate agro-toxics are some of the evils that tear man from the land of his birth. Climate change, the loss of biodiversity and deforestation are already showing their devastating effects in the great cataclysms we witness," he said.

"The god of money needs to plunder nature."

"[Ecological] evils that tear man from the land of his birth."

How are we to explain this?

How are we to explain that at the very moment that the oldest Christian communities in the world are being violently destroyed; that while Christians are murdered, raped and tortured in Africa and the Middle East; and while horrific barbarities are committed daily in the name of God, the pope issues an encyclical and travels around the world to talk about climate change?

It is happening because leftism has taken over much of Catholicism, most of mainstream Protestantism, increasing numbers of evangelicals and most of non-Orthodox Judaism. Not to mention the secular worlds of the news media, entertainment media and academia.

It is happening because the default philosophic, moral and political position in Latin America is leftism. Support for big government and the redistribution of income, and condemnation of capitalism and corporate profits -- these are givens in Latin America. And Pope Francis is Latin American to the core.

His leftism was the primary reason he worked so diligently to get the United States to normalize relations with the Castro brothers in Cuba -- instead of using his moral authority to condemn a brutal tyranny that has crushed and impoverished the Cuban people for 55 years.

"I would also ask His Holiness to take up the cause of freedom and democracy."

In the long run, this will bring down the Church -- just as it has mainstream Protestantism and non-Orthodox Judaism -- as well as diminish decency on earth.

It is, moreover, clear that the pope has been so influenced by leftism that he appears to know only the propaganda, not the science. For example, the typhoon in the Philippines had nothing to do with global warming. The leading science journal, Nature, wrote as much:

"Did climate change cause Typhoon Haiyan? There is limited evidence that warming oceans could make superstorms more likely."

Defenders of Pope Francis note that Pope Benedict, too, spoke eloquently about man's obligations to protect nature. That is true. And it is irrelevant. First, he issued no encyclical on the issue; his encyclicals were, like almost every papal encyclical, non-political. Second, everyone knows we have an obligation to care for the planet. But caring for the planet has as much to do with left-wing environmentalism as protecting workers had to do with Communism.

Unfortunately, however, being a wonderful person doesn't mean you will be a wonderful pope. Any Catholic who tweets, "Inequality is the root of social evil," as Pope Francis did last March, should be a socialist prime minister, not a Christian leader. The moral message of every Bible-based religion is that the root of evil is caused by poor character and poor moral choices, not by economics. The pope's tweet is from Marx, not Moses.