The Media Are Much Scarier than Ebola 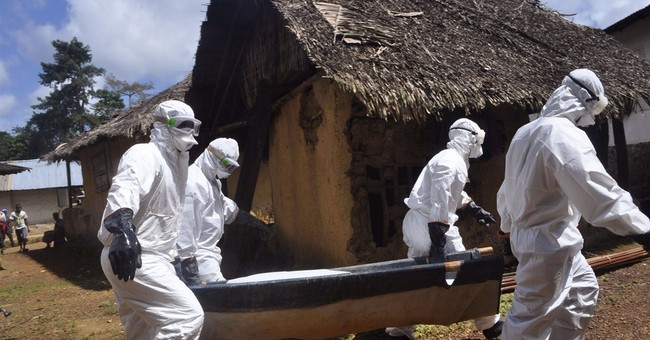 Why do some things scare people more than others?

One reason is that people engage in a rational assessment of risk and conclude the appropriate level of fear. For example, people feel free to walk alone at midnight in Times Square but not in Central Park because they have made a rational assessment: Times Square, which at midnight is almost as bright as day and filled with people -- usually tourists -- is safer than Central Park.

A second reason is that emotions rather than reason cause people to fear something. Some years ago I was a guest on the television show "Politically Incorrect," the Bill Maher-hosted predecessor to his current HBO show, "Real Time with Bill Maher." One of the other guests was the late Christopher Hitchens. At one point, he lit up a cigarette. There were some negative reactions, so I looked at the audience, and asked: "If you think the smoke from this cigarette is endangering your health, clap."

Most of the audience did.

To understand the absurdity of that response, one must understand that the show took place in a studio in which the audience was seated a good 50 feet from the set, and well above it. It is inconceivable that any smoke reached anyone in the audience -- and, of course, it wouldn't matter if any had. The fear that secondhand smoke from one far away cigarette was endangering anyone's health was emotion-based, not reason-based.

Then there is a third reason that explains why people fear certain things more than others: media attention.

It is likely that the mass media are the primary reason for the current profound fear of Ebola that permeates American society.

How profound? If the passenger seated next to them on an airplane coughs, many Americans wonder if they are at risk of contracting Ebola. According to a Washington Post poll, two thirds of Americans fear an epidemic in the United States, and four in 10 said they are somewhat or very worried that a family member may contract the disease.

This is at a time when the total number of Americans who have contracted Ebola is two -- both of whom had direct contact with an Ebola patient. As Linda Chavez points out in the New York Post, last year, about 30,000 Americans died of the flu, yet most Americans don't get flu shots.

It's all because of the mass media. Ebola dominates the news as much as the terrorist attack at the Boston marathon dominated the media.

Nor is there a right-left divide here. In general, the left has been far more hysteria prone than the right -- heterosexual AIDS in America; the number of girls dying from anorexia; the "rape culture" on American campuses; the likely destruction of life as we know it as a result of fossil fuels -- these are a few the many left-wing-generated hysterias. But there's no left-right divide on Ebola. My wife and I so admire the conservative magazine, The Weekly Standard, that we each have our own subscription. Yet it just featured a piece titled "Six Reasons to Panic."

As for Africa, here's something to consider: According to the World Health Organization, in 2012, 627,000 Africans died of a disease. But it wasn't Ebola. It was malaria. Why no concern about that? Because malaria won't touch anyone in the Western world, and therefore the media never mention it. The obsession with Ebola rather than malaria is First World narcissism.

If Americans seek reasons to panic, at least two things rationally qualify: The Islamic State and all the other Muslim terror groups whose greatest desire is to murder and maim as many Americans as possible; and Iran on the verge of making a nuclear weapon.

It would be a better world if the media were preoccupied with those two issues. But for two weeks, they have only mentioned the former in between reports on Ebola. And they almost never mention the latter.

Of course, it is possible that the mass media may end up right on this issue. But track records matter, and the media's track record is shameful. For half a century, just about every health and social hysteria has been manufactured or abetted by these media, especially television news.

That is why the media are so frightening. There doesn't appear to be anything that they cannot persuade most people, in any country, to believe.